Serve God by Serving Others 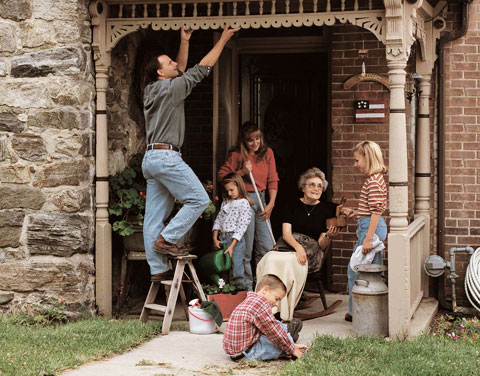 As children of God strive to become more like their Heavenly Father, the Holy Ghost can guide them in giving meaningful service to one another. True service is free of all selfishness and fosters Christlike love.

“It is only when we love God and Christ with all of our hearts, souls, and minds that we are able to share this love with our neighbors,” says Elder M. Russell Ballard of the Quorum of the Twelve Apostles. And we demonstrate that love “through acts of kindness and service—the way that the Savior would love and serve all of us if He were among us today.”

He notes that when an individual is filled with charity, that individual’s thoughts, feelings, and actions become more like those of Heavenly Father and Jesus Christ as motivations and desires fall in line with divine will.

Like other prophets and apostles, Elder Ballard counsels us that “in all of our service, we need to be sensitive to the promptings of the Holy Ghost.” He says that “the still, small voice will let us know who needs our help and what we can do to help them.”

Serving by Preserving a Memory

President Henry B. Eyring, First Counselor in the First Presidency, tells of a time he felt prompted by the Holy Ghost to write down an example of service he witnessed:

"I came home late from a Church assignment. It was after dark. My father in law, who lived near us, surprised me as I walked toward the front door. I knew that he had been building a system to pump water from a stream below us up to our property,” President Eyring recalls.

"He smiled, spoke softly, and then rushed past me into the darkness to go on with his work. I took a few steps toward the house, thinking of what he was doing for us, and just as I got to the door, I heard in my mind—not in my own voice—these words: 'I'm not giving you these experiences for yourself. Write them down.'

"I went inside. I didn't go to bed. Although I was tired, I took out some paper and began to write. And as I did, I understood the message I had heard in my mind. I was supposed to record for my children to read, someday in the future, how I had seen the hand of God blessing our family. Grandpa didn't have to do what he was doing for us. . . . But he was serving us, his family, in the way covenant disciples of Jesus Christ always do. I knew that was true. And so I wrote it down, so that my children could have the memory someday when they would need it."

Skipping Lunch Because of Love

Elder D. Todd Christofferson of the Quorum of the Twelve Apostles tells of a time when he was a boy and his mother came very close to death due to cancer surgery. It was painful for his mother to use her right arm because much of her neck and shoulder tissue was removed.

“One morning about a year after the surgery, my father took Mother to an appliance store and asked the manager to show her how to use a machine he had for ironing clothes,” Elder Christofferson says.

The machine operated by pressing pedals with one’s knees to lower a roller against a heated metal surface while feeding in articles of clothing. The machine made ironing easier for the mother of five boys.

“Mother was shocked when Dad told the manager they would buy the machine and then paid cash for it. Despite my father’s good income as a veterinarian, Mother’s surgery and medications had left them in a difficult financial situation, Elder Christofferson says.

“On the way home, my mother was upset: ‘How can we afford it? Where did the money come from? How will we get along now?’ Finally Dad told her that he had gone without lunches for nearly a year to save enough money. ‘Now when you iron,’ he said, ‘you won’t have to stop and go into the bedroom and cry until the pain in your arm stops.’ She didn’t know he knew about that. I was not aware of my father’s sacrifice and act of love for my mother at the time, but now that I know, I say to myself, ‘There is a man.’”

Saying “Thank You” with Carpet and Paint

President Thomas S. Monson repeats what the Savior said—that in order to find purpose in life, lose yourself in the service of others.

“Those who live only for themselves eventually shrivel up and figuratively lose their lives, while those who lose themselves in service to others grow and flourish—and in effect save their lives," he says.

President Monson further teaches this doctrine by telling how individuals in one group found purpose in their lives by serving their neighbors.

In a letter President Monson received, Sister Mori Farmer explained that her family had experienced difficult financial times. One week, the Farmers attended a family reunion, and when they returned they found a letter taped to the garage door. The note read: “We hope you had a great family reunion. While you were gone, we and about 50 of our friends had a great party at your house. We want to thank you from the bottom of our hearts for the years of unselfish service you both have given to us. You have been Christlike examples of untiring service to others. We can never repay you for that—but just thought we’d like to say thanks. Signed, your home teachers.”

The Farmer family was shocked as they entered their house.

“Our home teachers had decided that they would fix our carpet while we were away. They had moved the furniture out into the front yard so the carpet could get stretched and finished. One man in the ward stopped and asked what was going on. He returned later with several hundred dollars’ worth of paint and said, ‘We might as well paint the house while everything is out.’ Others saw the cars out front and stopped to see what was going on, and by week’s end 50 people were busy repairing, painting, cleaning, and sewing.

“Our friends and fellow ward members had fixed our poorly laid carpet, painted the entire house, repaired holes in the drywall, oiled and varnished our kitchen cabinets, put curtains on three windows in the kitchen and family room, did all the laundry, cleaned every room in the house, had the carpets cleaned, fixed broken door latches, and on and on. … All of this had been accomplished between Wednesday and our return on Sunday.”

Those who served the Farmer family said they felt spiritually uplifted and humbled as they demonstrated the pure love of Christ by serving those who had unselfishly served others for years.

“We learn from D&C 4:2 that it is not enough to serve God with all of our might and strength,” says Elder Dallin H. Oaks of the Quorum of the Twelve Apostles. “He who looks into our hearts and knows our minds demands more than this. In order to stand blameless before God at the last day, we must also serve him with all our heart and mind.

“Service with all of our heart and mind is a high challenge for all of us. Such service must be free of selfish ambition. It must be motivated only by the pure love of Christ.”