Saints in India, Pakistan, Sri Lanka Are “Near Our Hearts” 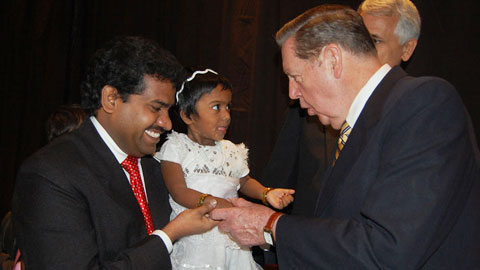 “I have come to say to all of you that you are known, you are loved, you are appreciated. You may be a long way from us physically and geographically, but you are not more than a prayer and a heartbeat away from our affection and our admiration,” Elder Jeffrey R. Holland of the Quorum of the Twelve Apostles told participants in a priesthood leadership conference held in New Delhi, India. The conference was telecast to several other locations in India, Pakistan, and Sri Lanka. “Thank you for serving,” he said. “Thank your wives and children—thank everybody. We know your sacrifices.”

Accompanied by several members of the Seventy and the two mission presidents for India, Elder Holland presided over a four-hour meeting that included instruction from the visiting authorities and a question-and-answer session.

A Parable about a Pearl

During the instruction period, Elder Holland shared a modern-day parable about a pearl and a box, in which a man finds a beautiful pearl and wants to share his discovery with the world. He commissions a stunningly beautiful box to hold the pearl, then puts the pearl on display only to realize that viewers are more appreciative of the display box than the pearl itself. Similarly, Elder Holland said, we can fall into the trap of making Church programs and activities a greater focus than the gospel itself.

He offered two suggestions to strengthen faith in Jesus Christ. First, he said, we need to improve our sacrament meetings. “If we’re going to worry about a meeting, let’s worry a little more about that one.” He emphasized the need to center sacrament meeting around the sacrament and the Savior’s Atonement, reminding leaders that there are people coming to church needing the sacrament to help them get through the week. “Teach Aaronic Priesthood holders what they’re doing when they pass, prepare, and bless the sacrament of the Lord Jesus Christ,” he directed.

His second suggestion was that we improve our teaching. “What we have for motivation in the Church is spiritually informed and empowered words. And that, one way or another, means teaching.” Making the point that our primary method of conveying the Spirit is to testify, he urged priesthood leaders to see themselves as teachers first and foremost. “I would ask that you see [your call to serve] as a call to teach much more than a call to manage or to administer,” he said. “We want you to be reasonably good administrators. But we really, really want you to be good teachers.” He described good teaching as “strong, faithful, inspired teaching that has the Spirit of the Lord with it, teaching that concludes with a testimony and moves people to live a better life and to reach a little higher. . . . That’s the way, in effect, lives are changed.”

During the question-and-answer session, Elder Holland and the other visiting Church leaders took turns answering questions posed by priesthood leaders from India and Pakistan. Among the topics Elder Holland addressed were the law of consecration, the responsibility of the family to set expectations for young people to serve missions, and the issue of prospective elders.

Consecration Is a Covenant

“One of the covenants we make in the temple is to consecrate,” Elder Holland told the priesthood leaders, most of whom have received their endowments. “Part of the implication and invitation of the law of consecration is to build up the kingdom of God on earth and to establish Zion. . . . Where do we [do this]? In the Latter-day Saint home. Zion starts with an LDS family—parents who love each other and sacrifice for each other and tell children that they love each other and sacrifice for each other.” He mentioned that he had never heard of wards or stakes in heaven, saying, “The only [organization] that I know that exists in heaven is families. We are going to be practicing here what it’s going to be like there. . . . The invitation spiritually is to start that right now in our homes.”

What Will the Family Do?

The topic of prospective elders was particularly tender to Elder Holland. Explaining that he had been the son of an “inactive, cigarette-smoking, coffee-drinking, prospective-elder father,” he told the brethren, “If you’ll get specific about the men involved—their names, their faces, and their families—you will work miracles. . . . I get to be here today, in one generation, because somebody stopped talking about the big problem of prospective elders and they talked about Frank Holland.” He added that we need to be preventive as well as redemptive in this matter. “The best thing you can do about prospective elders is prevent them getting there.”

At the end of the session, Elder Holland offered a question of his own. “What happens when this meeting is over?” he asked. Answering the question, he said, “When we walk out of here and you go home, you still have the gospel. You have the scriptures. You have revelation. You have prayer, mighty prayer. . . . You have the Holy Spirit. You have a member of the Godhead commissioned and committed to being your companion and going where you go, doing what you do, and helping you succeed.” Reminding the leaders that they are “chosen, ordained, set apart, commissioned agents of the Lord,” he quoted a saying of President Monson: “‘When you’re on the Lord’s errand, you are entitled to ask for the Lord’s help.’”

Elder Holland offered an apostolic blessing on the members in India and Pakistan, blessing them with strength, health, and safety; with food to eat and clothing to wear; shelter for themselves and their loved ones; and strength to face challenges hopefully and cheerfully. He instructed the brethren to “tell the Saints that we prayed for them and we blessed them.”

In conclusion, he bore his testimony. “I’ve borne witness since I was a little boy in Primary, but now I am a witness, and I testify that this is God’s truth. I know that more certainly than I know any other thing in this world. I know, actually more certain than that you are actually sitting there and I am actually standing here. I would question that sooner than I could question that God is our Eternal Father and Jesus is the Christ and They appeared to a fourteen-year-old boy, and as a result we’re in New Delhi today. . . . I’m more certain of that than anything I know. And it’s not only that of which I bear witness; it is that of which I am a witness. I love you and will never forget you, and I’ll pray for you long after I’ve gotten on that plane and gone somewhere else in the world.”