Rising from the Rubble 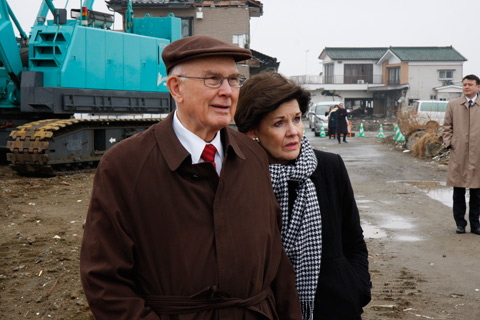 Elder and Sister Oaks show concern as they survey the destruction from the earthquake and tsunami that hit Japan in March 2011. Visiting on the first anniversary of the disaster, they brought encouragement and a message of hope to Latter-day Saints in the Land of the Rising Sun. (Photos by Osamu Sekiguchi)

“Look for the way that the Lord will consecrate your affliction for your gain,” Elder Dallin H. Oaks of the Quorum of the Twelve Apostles told Japanese Latter-day Saints during a recent visit to areas ravaged last year by earthquake and tsunami. He found that the Saints are rebuilding, rising from the rubble in the Land of the Rising Sun.

He said those who put their faith in Heavenly Father will find that even the most challenging trials can eventually bring great blessings. “That is an eternal principle,” he said. “He loves you. He wants you to have the choicest blessings that God has for you. When we do the things that God has commanded us to do, it causes us to be closer to our Savior. We can hear His voice through the Holy Ghost. We can feel the peace He speaks to our hearts. And we can know that our feet are on the path that leads us to our Heavenly Father and to exaltation.”

On the first anniversary of the March 2011 disasters that shook the islands of Japan and brought destruction to many of its cities, Elder Oaks, his wife (who served a full-time mission in Japan), and Elder Donald L. Hallstrom of the Presidency of the Seventy and his wife brought a message of hope and of a bright future to those who continue to endure their trials with patience and to draw strength from their faith in the Lord. He also visited the building site for the Sapporo Temple, a beacon of hope that is also rising.

Despite the devastation that enveloped Japan from coast to coast, Elder Oaks found the people rising from the rubble, ready to rebuild their lives after a humbling experience that tested and then substantiated their faith and conviction in the Lord.

An Example to the World 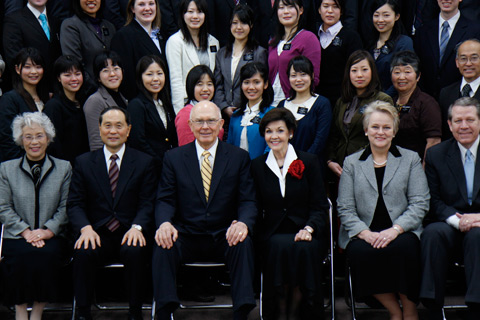 “Those who suffered the immediate tragedies have held their faith, and their brothers and sisters throughout Japan through the fine leadership of the Area Presidency responded with helping hands, with donations, with service, with encouragement,” Elder Oaks said. “It’s been an example for the whole world.

“I’ve been very touched by the personal witness I’ve had of the Japanese Saints and the way they’ve responded to this disaster. It’s increased my faith and my determination to try to serve in a similar way in the circumstances in my life and in the teaching of members elsewhere.” 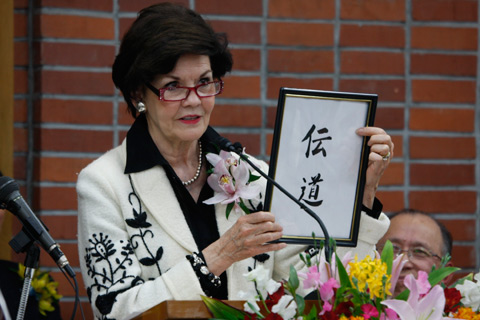 Sister Oaks, who served as a missionary in Sendai, shared her love of the people of Japan, saying, “I think I was an adequate missionary, but I learned so much from them. I am such a better person for being in this nation. They are so loving and so giving and so loyal.”

We should strive to respond to every trial and hardship we face with such courage and trust in the Lord, Elder Oaks said. “The Lord has promised that He will consecrate our afflictions for our gain,” he continued. “And in many ways, some foreseeable and some not foreseeable, the Lord will surely bless the people who have passed through this adversity and their posterity through generations to come.”

Elder Oaks said that although we do not know why tragedies happen to some of us, we do know that the Lord will strengthen us in times of need, to help us reach our divine potential through the Atonement of Jesus Christ.

The Lord Provides a Way 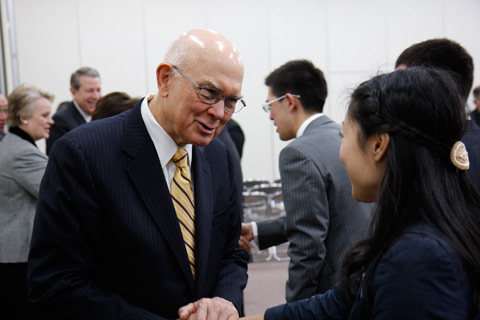 Elder Oaks greets missionaries after a zone conference in Sendai.

God loves all His children and cares about the salvation of every individual, Elder Oaks said. He told Japanese members, “Yesterday, we saw the devastation, terrible loss of homes and property. And those that lost their lives have not lost their opportunity for salvation because part of the fulness of the gospel is the assurance that there are ways to be saved after this life. And that is the work of missionary work in the world of spirits and of temple work in the temples. These are true principles. I testify of Jesus Christ, who makes it all possible. We are His servants. You are His people.”