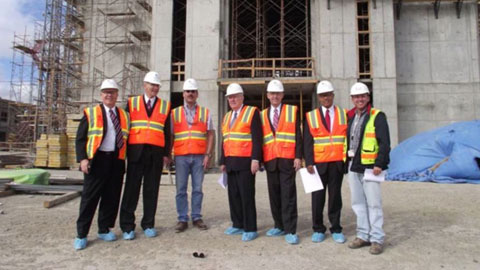 Each member of the Church must build a deep faith in Christ, Elder M. Russell Ballard and Elder D. Todd Christofferson of the Quorum of the Twelve Apostles told members in Guatemala, Honduras, and Nicaragua during recent assignments in Central America. Along with other Church leaders, they counseled members to strengthen their families through prayer, scripture study, temple service, family home evening, observance of the Sabbath day, obedience to the Lord’s commandments, and sharing their faith with those around them.

“We must raise our light so it shines before the world,” Elder Christofferson taught young adults in Nicaragua. “Others must perceive in us something of the light of Christ. Living that way does not happen overnight; it requires perseverance and devotion.” 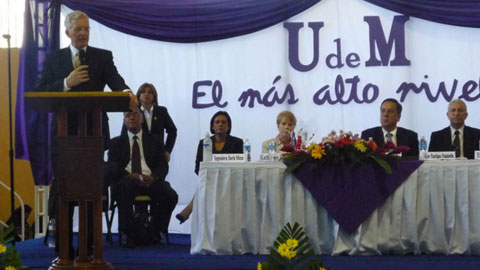 Elder D. Todd Christofferson speaks to students at the University of Managua in Nicaragua.

Elder Christofferson and Elder Ballard presided over special conferences in several stakes and participated in firesides for local priesthood leaders, parents and married couples, young single adults, and youth. They also met with 1,100 missionaries in four missions, stake presidencies, bishops, and branch presidents presiding over what Elder Ballard called “an ever-growing Church in those countries.” He later said what he saw in Central America was the sort of thing Joseph Smith envisioned when he prophesied that the Church would someday “fill North and South America.”

During the 30 meetings held, approximately 31,000 members were able to listen to the Apostles and partake of special blessings of guidance, comfort, and strength given in each meeting.

The Apostles and other Church leaders also took time to meet with national and civic leaders. Elder Ballard met with the president of Guatemala, Alvaro Colom, while Elder Christofferson met with Mario Valle, a civic leader in Nicaragua. Elder Christofferson spoke to students at the University of Managua in Nicaragua, explaining the Perpetual Education Fund and bearing testimony of the Restoration of the gospel. Another highlight of the trip was a visit to the Tegucigalpa Honduras Temple, to see firsthand the construction in progress.

Elder Ballard and Elder Christofferson were accompanied by Presiding Bishop H. David Burton and Elder Jay E. Jensen of the Presidency of the Seventy. In addition to the other assignments, Elder Jensen, representing the Presidency of the Seventy, visited the country of El Salvador, and Bishop Burton visited with the mayor of Quetzaltenango, Guatemala, Jorge R. Barrientos. Katherine Christofferson, Barbara Burton, and Lona Lee Jensen accompanied their husbands.