President Uchtdorf Teaches How to Focus on True Meaning of Christmas 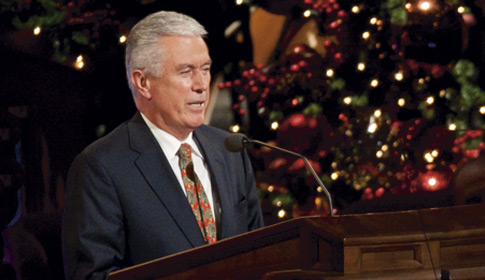 Using the Grinch, a character from a well-known children’s story, as an analogy, President Uchtdorf asked, “Who among us has not felt concern over the commercialization and even greed of the Christmas season? Who hasn’t felt overwhelmed by the packed calendars, the stress of finding gifts, the pressure of planning meals and events?”

“We know what the Christmas season ought to be,” President Uchtdorf said. “We know it should be a time of reflection on the birth of the Savior, a time of celebration and of generosity. But sometimes our focus is so much on the things that annoy and overwhelm us that we can almost hear ourselves say in unison with the Grinch, ‘Why, for fifty-three years I’ve put up with this now. I MUST stop this Christmas from coming! . . . But HOW?’”

The devotional is an opportunity each year for the President of the Church and his Counselors to bear witness of the Savior and to offer Christmas messages to Church members and others seeking to follow the Lord Jesus Christ. The event is also broadcast on the Church’s satellite system and on stations affiliated with Brigham Young University, bringing the total number of listeners into the hundreds of thousands.

President Uchtdorf pointed out that in spite of the negative features that many have come to associate with Christmas, we only have to look in order to experience the “powerful message of the birth of the Son of God, and to feel the hope and peace that He brings to the world. We, like the Grinch, can see Christmas through new eyes.”

President Uchtdorf shared his family’s tradition of observing the Advent of Christmas. On Sunday afternoons, his family would light candles and read scriptures that “center on the Christ.”

He shared three ways that we can prepare:

By doing these things and looking for the good in the season, “we can see this time of year with new eyes—perhaps even with the eyes of a child.” Then, he said, perhaps our hearts, like the Grinch’s heart, will change as we look beyond the worldly aspect of Christmas and come to understand and refocus on the true meaning of Christmas.