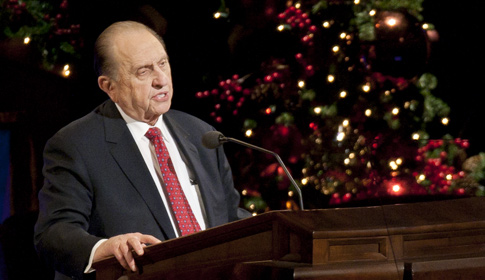 Christmas is a perfect time to rededicate ourselves to living the principles taught by the Savior, President Thomas S. Monson said during the First Presidency Christmas Devotional on December 5 at the Conference Center in Salt Lake City.

The devotional is an opportunity each year for the President and his Counselors, who as the First Presidency form the presiding council of the Church, to bear witness of the Savior and to offer Christmas messages to Church members and others seeking to follow the Lord Jesus Christ. The event is also broadcast on the Church’s satellite system and on stations affiliated with Brigham Young University, bringing the total number of listeners into the hundreds of thousands.

“Bringing the Christmas spirit into our hearts and homes takes conscious effort and planning but can surely be accomplished,” President Monson said. He encouraged those listening to create a spirit of love that will “fill our homes and our lives and linger there long after the tree is down and the lights are put away for another year.”

“Most of all, let it be a time to remember the birth of our Savior, Jesus Christ, that we may share in the song of the angels, the gladness of the shepherds and the worship of the Wise Men.”

He added, “In looking back over the years, it is obvious that the Christmases I remember best, the Christmases which touched my heart the most, are Christmases filled with love and giving and the Spirit of the Savior. I believe that such would be true for all of us as we reminisce concerning our best-remembered Christmases.”

President Monson shared an account of the experience of a soldier in the U.S. Army that was occupying Frankfurt, Germany, following World War II. Most of the city was reduced to rubble, but the soldier, John B. Matheson Jr., was living with two other officers in a three-story home that was still standing. The army had hired an elderly German woman to clean the building.

To provide a Christmas gift for the woman, John filled a box with candy bars, soap, and canned fruit juice he had saved from rations. Though he knew that the goods could be bartered for and would bring the woman money, the gift was given out of pity and for the satisfaction of the solider.

When the soldier returned that evening, he found that the woman had taken his gift but had also left a gift for him. “On that dimly lit table, along with her painstakingly written ‘Merry Christmas,’ were 10 old and dog-eared picture postcard scenes of Frankfurt as it had appeared before the war had so devastated it. The housekeeper had placed each card on edge and fastened them together so that every 2 cards formed a point and all 10 together formed the Christmas star."

President Monson said the woman had little to give, but that “though John Matheson lived to see many more Christmases, that little housekeeper’s Christmas star shone brightly throughout his life. He said that her ‘star of Bethlehem’ implanted within him the Christmas spirit and taught him the true meaning of love and giving.”