President Monson Gives Thanks at Groundbreaking

Speaking to Italian Latter-day Saints, President Thomas S. Monson expressed gratitude that a temple is being built in Rome.

At the groundbreaking ceremony for the Rome Italy Temple on October 23, President Thomas S. Monson expressed joy for the opportunity to join with the Italian Saints for the historic ceremony. He said he was grateful for the warm welcome he had received. He also gave a brief review of the history of the Church in Italy.

Italy was first introduced to the gospel almost 2,000 years ago by the Apostles Peter and Paul, President Monson said. He noted that emissaries of the restored Church began missionary efforts in June of 1850 with the arrival of Elder Lorenzo Snow and two companions. Missionary efforts ceased a few years later, but the work resumed in 1965 when the Italian government gave Elder Ezra Taft Benson permission for missionaries to enter the country.

Joining President Monson at the groundbreaking were Elder William R. Walker of the Seventy, executive director of the Temple Department; Elder Erich W. Kopischke of the Seventy, president of the Europe Area; and Elder Kopischke’s counselors, Elder Gérald Caussé and Elder José A. Teixeira, also of the Seventy.

In his comments during the groundbreaking, Elder Walker told President Monson that he had “made all the Saints in Italy happy by being here, and not just the Saints in Italy, but Saints throughout the world who view this as a great and historic day. 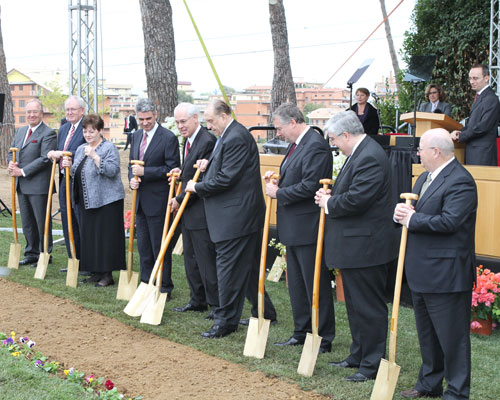 President Monson joins leaders, officials, and guests in turning over soil at the groundbreaking for the Rome Italy Temple.