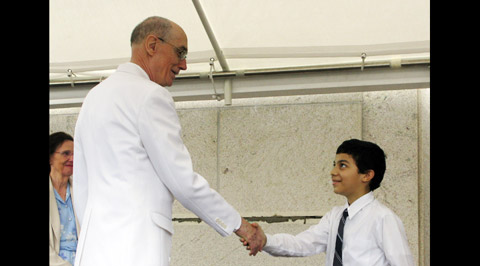 President Eyring greets Jacob Ayala with a handshake during the cornerstone ceremony.

When President Henry B. Eyring went to El Salvador for the dedication of a temple, he rejoiced with thousands of participants at a cultural celebration, presided at the cornerstone ceremony and in the dedication meetings, and offered the dedicatory prayer. In so doing, he ministered to thousands.

During a brief moment at the cornerstone ceremony, the First Counselor in the First Presidency showed what it means to minister to one.

Christ Is Our Cornerstone

Then Jacob was one of four children invited to the stand, where President Eyring greeted him with a handshake and a warm smile. Jacob was on the stand for less than two minutes, but the look on his face as he returned to his family showed that he would never forget the experience.

After the ceremony, Jacob talked with his parents and his six siblings. He said that he was happy when he met President Eyring. He remembered President Eyring’s counsel to place Jesus Christ as the cornerstone in our lives, but he struggled to explain exactly what that means. That gave his parents, Jorge and Dora, the opportunity to share their testimonies with their family. Jorge said that the Savior is our cornerstone because of the support He gives us. Without Jesus Christ, Jorge said, we would be lost. “Without His atoning sacrifice and Resurrection,” he said, “none of this would have any meaning.” 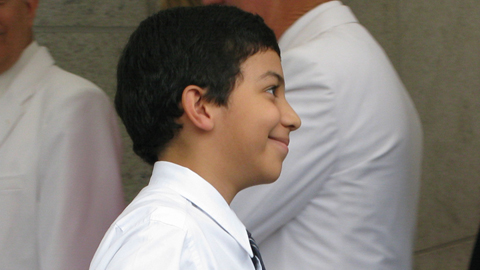 Dora told her husband and her children of the joy she felt when she saw Jacob with President Eyring. “He is a prophet, and a prophet is a symbol that revelation exists on the earth again, that the heavens are open. It is a great blessing for our family to be here at this time.”

This personal ministry—an Apostle’s teachings and his presence blessing one young man and his family—came about 12 hours after a cultural celebration the night before, an event of dancing and singing with performances by more than 2,000 youth from 17 stakes and 2 districts, in front of President Eyring and about 12,500 others.

Even before President Eyring walked to his seat at the event, the youth and all the spectators stood in anticipation of his arrival. When he finally appeared, they cheered and cheered. Many young men waved their hats in the air.

“President Monson is the champion of these events, which bring our people together and provide those who participate an opportunity to mingle with members their own age who share their standards, to make new friends, and to create memories that will last throughout their lives,” President Eyring said. 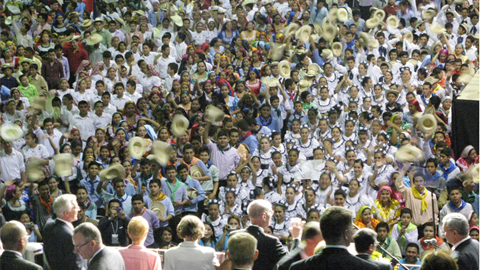 Spectators and youth cheered the arrival of President Eyring. Many young men waved their hats in the air.

He acknowledged the months of preparation by the performers. “I know how hard you have worked,” he said. “I am surprised you don’t look tired. But you look happy.” He helped participants understand that their Heavenly Father was aware of their diligence. “God will reward you,” he stated. “I promise you that you will feel joy, as will those who see and hear your performance. They will remember the energy, the color, the music, and the feeling of this grand salute to your glorious and sacred heritage.”

President Eyring told of the first convert in El Salvador, baptized in 1951, two years after Latter-day Saint missionaries arrived in the country. “That single convert,” he said, “has now grown to a Church membership of over 105,000. The temple, which will be dedicated tomorrow, stands as a monument to that growth and to your faith and dedication and testimony.”

When he finished delivering his message, youth and spectators alike echoed his “amen” and then began to cheer again, increasing in energy and volume. It was a spontaneous, jubilant outburst of love and gratitude because a servant of the Lord had come to dedicate a temple in their land.

The youth left the event with some tears on their cheeks, partly because after months of unified effort, something wonderful had come to an end. They also left with a resolve to follow the counsel they received from President Eyring: “May you continue to be faithful and true. May this beautiful temple be a beacon for members and all seekers of truth throughout this beautiful and promised land.” 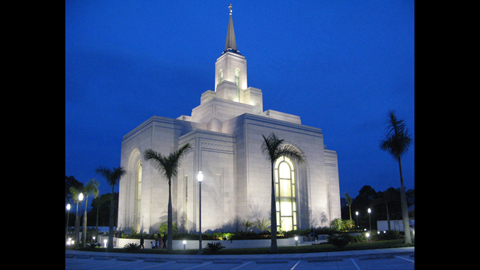 The El Salvador temple lights the evening before its dedication.

On the day of dedication, the people responded differently to the ministry of a prophet in their midst. They were still just as joyful as they had been the night before—maybe even more so—but their joy was quieter, deeper, more introspective. Some of the youth who had cheered so openly the night before now sat silently at the entrance to the temple, ready to put footlets over the shoes of those who would go inside. They were eager for President Eyring to arrive, but no one cheered when he walked to the temple entrance. Instead, they expressed their gratitude with reverent dignity.

Sacred sermons were delivered in the house of the Lord, and in the dedicatory prayer,

President Eyring said that with the completion of the temple, the Saints of El Salvador had been provided with “every blessing of the restored gospel of Jesus Christ.”

He prayed for God's blessings upon the people and leaders of El Salvador, for freedom, opportunity, and peace in the land. He prayed in conclusion that the temple's “influence may be felt throughout the land as a light upon a hill.”

And when the Saints exited the temple and their stake centers—wherever they attended the dedicatory sessions, in person or by closed-circuit transmission—some had tears in their eyes. Not because something wonderful had come to an end but because something wonderful was just beginning. A servant of the Lord had dedicated a temple in their homeland by sacred priesthood power. Touched by this priesthood ministry, they shed tears of joy that showed they were ready to rededicate themselves, both by the thousands and one at a time, to faithful service in their homes and in the kingdom of God. 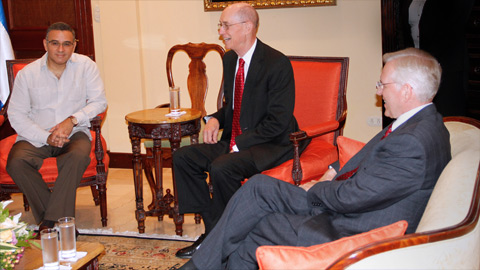 Meeting with the President

Before the cultural celebration, earlier the same day, President Eyring, Elder D. Todd Christofferson of the Quorum of the Twelve Apostles, and other Church leaders met for 45 minutes with President Mauricio Funes and first lady Vanda Pignato in the presidential palace. It was the first time a member of the First Presidency has met with a president of El Salvador.

They discussed their common desire for the welfare of all Salvadorans, their hope and optimism for the country’s future, the Church’s emphasis on self-reliance and service to all mankind, and the Church’s humanitarian efforts in El Salvador and elsewhere.

President Eyring said the key to helping people is to change their hearts. “Teach them that they are children of God so that no matter what their challenges or difficulties are, they will know that things will get better.” Elder Christofferson said the Church urges its members to become “some of the best citizens in this or any other country.”

President Eyring said that President Funes “talked mostly about lifting others and his concern for people who have been, in various ways, left behind.” He described President Funes as “a gracious, competent, and kindly person who wants what is best for his people.”

During his assignments related to the temple dedication, President Eyring was accompanied by his wife, Kathleen. Others who attended various events included Elder D. Todd Christofferson of the Quorum of the Twelve Apostles and his wife; Elder William R. Walker of the Seventy, Executive Director of the Temple Department; Silvia H. Allred, first counselor in the Relief Society general presidency, who is a native of El Salvador; members of the Seventy serving in the Area Presidency, Elder Enrique R. Falabella, Elder James B. Martino, and Elder Carlos H. Amado; and Elder Carlos Rivas, an Area Seventy.