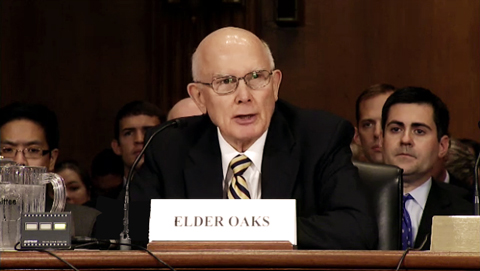 “We are grateful for charitable deductions, which encourage donations to churches and other charities,” Elder Dallin H. Oaks of the Quorum of the Twelve Apostles testified during a government hearing in Washington, D.C.

“The effect of this tax benefit is built into the financing of charitable enterprises that are vital to our nation, and it is a significant and wise support of the private sector,” he said. “The charitable deduction should remain unimpaired, not just for religions and their unique role but for the benefit of the entire private sector of our nation.”

Elder Oaks spoke at the United States Senate Committee on Finance hearing on the topic of “Tax Reform Options: Incentives for Charitable Giving,” on October 18, 2011.

He is uniquely qualified to speak on such an issue. Prior to his calling as an apostle, he had extensive experience in law and education. He was a clerk for a justice of the Supreme Court of the United States, a professor of law at the University of Chicago Law School, a justice of the Utah Supreme Court, and president of Brigham Young University, among other qualifications.

Held Together by Obedience

Elder Oaks noted that Constitution of the United States was founded for moral and religious people, and that “our nation is held together not just by law and its enforcement, but by voluntary obedience to the unenforceable and by widespread adherence to norms of right and wrong, such as the vital principle of honesty. For a large proportion of our citizens these essential norms are grounded in the principles of our religious beliefs, taught in our churches and synagogues.”

He appeared with other religious leaders who had read and endorsed his statement, as well as leaders of charitable organizations, and scholars. They emphasized the important role that both religious and private charitable associations have in society.

Such associations “are responsible for tens of millions of jobs and innumerable services that benefit our citizens at every level,” Elder Oaks testified. ‘I speak of private educational institutions, hospitals, social welfare agencies, and innumerable other organizations ministering to the needs of children, youth, the aged, the poor, and citizens generally. The financial well-being of this private sector is dependent upon private contributions that qualify for the charitable deduction. And the impact these private institutions have on those they serve is magnified by the millions of volunteers motivated by the ideals they pursue.”

As an example, Elder Oaks said, “In the aftermath of Katrina and the other 2005 Gulf Coast hurricanes, The Church of Jesus Christ of Latter-day Saints aided the cleanup efforts with almost 3,000 tons of emergency supplies, over $13 million in cash and use of heavy equipment, and its members gave more than 42,000 man-days of service. Other non-profit organizations provided over $3.5 billion in cash and in-kind donations to help with relief efforts.”

Elder Oaks added: “The private sector of charitable activity is almost unique and surely uniquely valued in America. And we all understand that its activities are funded by private donations produced or importantly stimulated by a charitable deduction that reduces the donor’s taxes.”

Read a Newsroom story that includes links to video and text of Elder Oaks’ full statement, as well as the statements of others at the hearings.