Prepare to Be Blessed by Temple, Two Apostles Tell Saints in Box Elder

As they prepare to have a temple in their midst, certain activities can help Latter-day Saints to better live the gospel. These include:

President Boyd K. Packer and Elder Richard G. Scott of the Quorum of the Twelve Apostles discussed these and other subjects as they met with priesthood leaders and members from 13 stakes in the Box Elder region of northern Utah, even as a temple is being built in their midst. President Packer and Elder Scott met with bishops and stake presidents in a leadership conference on Saturday, August 20, in the Tremonton West Stake Center. Then on Sunday, August 21, at the Garland Tabernacle, Elder Scott addressed a special meeting for members of all ages. 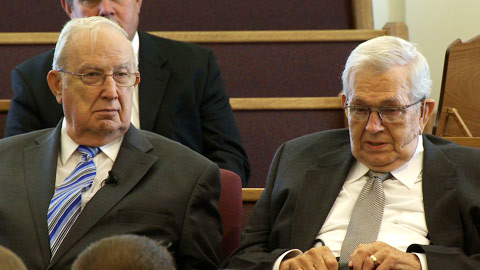 Elder Scott and President Packer listen to questions from priesthood leaders during the meeting in Tremonton.

Seek the Blessings of the Temple

The Apostles taught that the temple blesses those who prepare to enter worthily, who participate in ordinances, and who then honor the covenants they have made in the house of the Lord.

Both President Packer and Elder Scott commented on the Brigham City Temple, currently under construction. President Packer, who grew up in Brigham City, said, “Many of you, I know your names, and I could tell you stories about your fathers and grandfathers, who have worn their lives out preaching the gospel and administering in the Church.” He said, “I feel wonderful about being here today. It’s almost like being home. But there’s something better. We recently saw two children in the family married in the temple, and we sent two more on missions.” He said those are great blessings in life—going to the temple and giving service to others by sharing the gospel with them.

Elder Scott said he had been thinking about the devotion and faith of early pioneers in the Box Elder region, who sacrificed to build the tabernacle. “Now there will be a temple in this area, where you can receive the saving ordinances of the gospel and be sealed together as families for eternity,” he said. 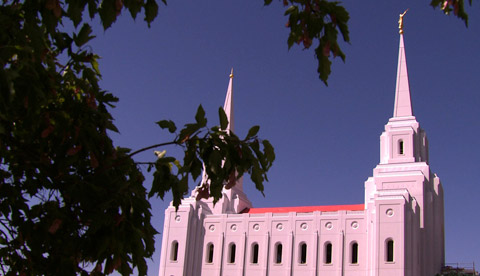 He counseled those old enough to qualify to have a temple recommend and to establish a goal to have one when the temple dedication comes. “To be in the temple when it’s dedicated is a singular and wonderful experience. You need to make the effort … so that you can enjoy the blessings [of being] present at the dedication of a temple by a prophet of the Lord.”

Find Answers in the Scriptures 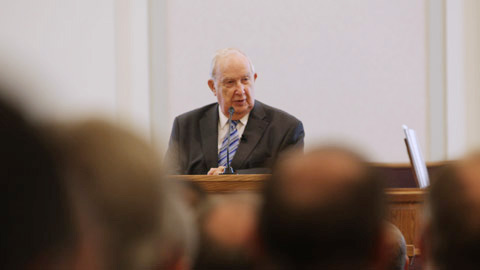 “Often,” Elder Scott said, “challenges that people face are resolved by reference to the scriptures. No one would have any question about how important the scriptures are to President Packer. If you see him with them as he’s teaching, often he just embraces them, holds them close to himself as he speaks. … He has memorized [many of] them, and that’s a great strength.”

He encouraged leaders to “concentrate on the doctrine and you’ll find you have discussions that are more meaningful, more productive, and more helpful to those that you serve. The same is true for the home.”

“I love the scriptures,” Elder Scott said. “They are the foundation of a worthy and perfected life. They provide inspiration and guidance. Father in Heaven knew we’d be tried on earth, and we would need Him and His Son. He gave us the power and support of the scriptures to help us.”

President Packer told stake presidents and bishops to follow the Spirit, promising that the Holy Ghost would help them to know what to say. He said that when Joseph Smith was asked to explain the difference between The Church of Jesus Christ of Latter-day Saints and other churches, he replied with just five words: “We have the Holy Ghost.” President Packer encouraged leaders to seek inspiration. “You can learn to discern,” he said.

Smiling, President Packer said, “We don’t worry about you. We know that in the strenuous work, you’ll finally give up and pray about it.” He told leaders to remind members that they were not only baptized but that they also received the gift of the Holy Ghost. “We need to teach [them] how the Spirit works,” he said, so that each member of the Church “might speak in the name of God the Lord, even the Savior of the world” (D&C 1:20).

He said that our minds possess a “delete key” that should be used when we feel we are being deceived. “Teach your young men to [use the] delete key,” he said. “Teach them that in the long run, Satan himself can’t overcome the power of a priesthood holder. Sisters have the same power. They can’t be destroyed without giving permission.” 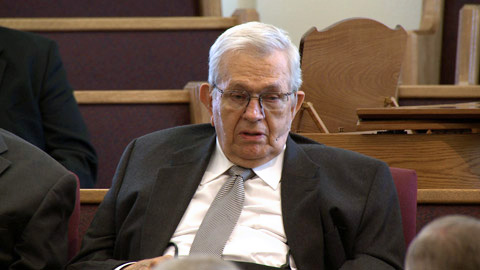 President Packer listens carefully to priesthood leaders, who shared experiences and asked questions during the training.

“Fear is the opposite of faith,” President Packer said. “The two can’t exist at the same time.” He said that often a priesthood blessing helps people to have courage to face challenges.

“Sometimes people aren’t doing exactly what you would like them to do in their private lives,” President Packer said, but we ought to find ways to put [positive] handles on them—he’s good with youth, he’s excellent with sports—ways of being able to integrate them into the pattern of activity which will bless their lives and which will allow them to bless others. 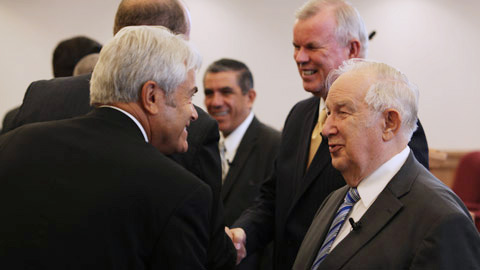 Elder Scott greets priesthood leaders one by one at the start of their training.

Elder Scott encouraged Primary children to smile and to help others to smile. “We need to be happy,” he said. He called on a teenager and a recently returned missionary to share their testimonies and to talk about temple preparation, modesty, and scripture study.

And he urged men to be good husbands and to express appreciation regularly. “When you get home, take your wife in your arms, tell her … how important she is to you, and mention a couple of things that she does that makes your life so enriched,” he said.

“Our wives have an extraordinary ability to sense the Spirit and be guided,” he said, noting that some of the most important lessons he has learned came from his wife. For example, she taught him to look people in the eye during a conversation. “It changed my life,” he said.

“What do you do to continually show appreciation to your wife?” he asked. “How do you communicate your gratitude for the blessing of being sealed to a daughter of the Father in Heaven? And when you have children, how can you express gratitude to her for giving birth to those children and nurturing them with you? Don’t let [telling her thank you] be a one-time event in her life.”

He said sisters have a divine ability to nurture, to strengthen, and to help. “But they need some feedback from us to know whether they’re doing it right or not, whether they’re having proper impact. … You can help by just mentioning specific things that you’re grateful for. Express the honest feelings of your heart. Talk about family matters, talk about the … things that are of interest to you both.”

He said another way of showing love to your eternal companion is to share with him or her “the spirit, inspiration, and peace of the temple.”

Elder Scott mentioned several times when he has asked priesthood holders to give their wife a blessing. “Those are some very tender moments,” he said. 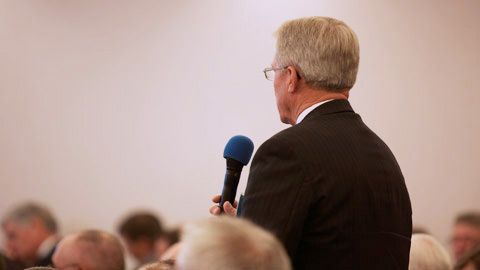 Pray for the Prophet

Elder Scott described President Thomas S. Monson as a big man with a big heart, always reaching out to other people. “When he can’t do something that he wants to do to bless somebody’s life, he often calls on one of us and says, ‘How would you like to paint a bright spot on your soul today?’ And we’re given an opportunity to reach out to somebody or to solve a problem in some way, to do something that he would love to do … himself.” Elder Scott encouraged the Saints to sustain President Monson. “He will benefit from your prayers, from your asking Father in Heaven to guide and strengthen him,” Elder Scott said.

President Packer spoke of the growth of the Church during the 50 years since he was first called to serve as a General Authority.

“We are growing rapidly across the world in spite of opposition, sometimes because of opposition,” he said, noting that at one time Apostles could visit every stake president at least once during the year. Although those days are gone, he said, it is important to realize that what is important is faith in the Lord Jesus Christ and obedience to the commandments. Then, he said, “it doesn’t matter if you see a member of the Twelve or not.”

He said the Church now has centers of strength in almost every part of the world. “In years to come … there will be many people drawn to the Church as a place of refuge from the ills of the world. Where there is peace, where there is loving friendship, and where there is a pattern of life well established and taught that brings consistent, continuing happiness, we are going to see that. The conditions of the world continue to deteriorate and Satan will have a heyday with those who have no anchor or mooring to truth, [but] we can help them with our righteous examples.” 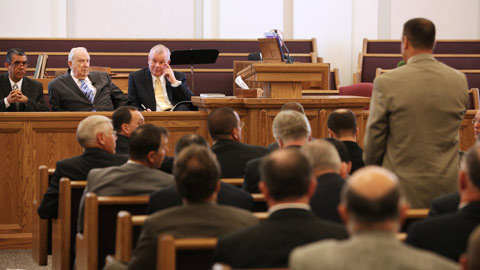 Elder Jose L. Alonzo of the Seventy, Elder Scott, and Elder Steven E. Snow of the Presidency of the Seventy listen to comments from a local leader.

These meetings with President Packer and Elder Scott were the first meetings in the Box Elder area conducted by Apostles since the 1985 visit of Elder Marvin J. Ashton. Leaders filled the pews shoulder to shoulder on Saturday, and so many faithful Saints gathered on Sunday that parking lots were filled to overflowing and cars were parked on streets for blocks and blocks surrounding the historic tabernacle. The Sunday meeting was broadcast by closed circuit television to five additional meetinghouses.

“It felt almost like I was talking with [them] one on one,” said Bishop Steven Todd Jensen of the Tremonton Eighth Ward following the priesthood leadership conference. He noted that President Packer and Elder Scott conducted the training using a council approach. “They would invite questions and then ask [everyone] to help answer the questions. Then they gave guidance and help.”

“The spirit that was here and the instruction that we received was of immense value to me,” said President Chris W. Thurgood of the Tremonton Utah West Stake, whose stake hosted the event. He said the doctrines and principles taught were not new, but the Apostles “have a powerful way of teaching and lifting us and making us see there’s more there than what we’ve seen before. These Brethren are kind and caring, and they want us to succeed.”

Read and watch more at Church News and Events.