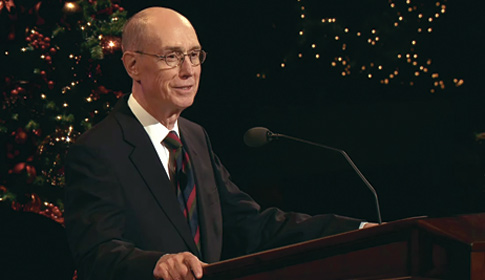 The little child born in a stable and cradled in a manger was a gift to the world from a Loving Heavenly Father, President Henry B. Eyring, First Counselor in the First Presidency, said at a Christmas devotional on December 5.

“He was the promised Redeemer of the World, the Savior of mankind, the Son of the living God. He was with His Father before He came to earth in mortality, the Creator of the earth upon which we stand.”

The First Presidency Christmas Devotional is an opportunity each year for the Church President and his Counselors to bear witness of the Savior and to offer Christmas messages to Church members and others seeking to follow the Lord Jesus Christ. The event is also watched by hundreds of thousands worldwide, thanks to broadcasts on the Church’s satellite system and on stations affiliated with Brigham Young University.

“Many of you will in the Christmas season find ways to give food to people who are hungry,” President Eyring said. “As you do, you bring joy to the Lord. Yet He taught us that there is a way to give an even more priceless and lasting gift. He said, ‘I am the bread of life: he that cometh to me shall never hunger; and he that believeth on me shall never thirst’ (John 6:35).”

President Eyring said the Savior has suggested two things Church members can do that will cause Him to have joy. First, offer Him a broken heart and a contrite spirit, demonstrating faith in Him and belief in His Atonement. “We can repent and make sacred covenants with Him,” President Eyring said. Second, serve others by doing for them what He would do for them. “Many of you have already done that and felt His appreciation,” he added.

Noting that the Savior came to earth in humble circumstances and worked in His earthly father’s carpentry shop, President Eyring said, “In His mortal ministry He walked the dusty roads of Palestine, healed the sick, raised the dead, taught His gospel to people who rejected Him, gave His life on Calvary’s hill, and rose on the third day in what began the Resurrection to break the bands of death for us all.”

Christ paid the price for our sins, President Eyring said, noting that those who have felt the Savior’s peace and healing have hearts filled with gratitude. Those who love them are also affected, he said.

“As Latter-day Saints, we feel our hearts drawn out in gratitude to a loving Father and His Beloved Son. We are thankful to feel that blessing because of the faith of a 14-year-old boy, Joseph Smith,” President Eyring said, noting that Joseph’s prayer on a spring morning in 1820 made possible a sure witness that Heavenly Father and His Son live and love us.

President Eyring told about visiting his aunt in a rest home a number of years ago. She was advanced in age, a widow, unable to care for herself. She did not recognize President Eyring or others in the room. But her face showed love and joy, and every few minutes she repeated six words from a well-known hymn: “I know that my Redeemer lives.”

“While the passing years had stripped away from her life so much of what had brought her joy, she retained the supernal gifts we can feel at Christmastime,” President Eyring said. “She remembered her Redeemer. She knew that He lived. She felt His love. And she felt His love for all of Heavenly Father’s children, wherever they were and whatever their circumstances.”

His aunt, he realized, had shared with him the same gift she had received. “She knew the source of the peace she felt. And out of her gratitude and love for the Savior, she wanted us to share in the blessing with her,” he said.

This feeling should be a part of Christmas, President Eyring said. “We feel a spirit of giving and gratitude for what we have been given,” he said. “The celebration of Christmas helps us keep our promise to always remember Him and His gifts to us. And that remembrance creates a desire in us to give gifts to Him.”