Church members and missionaries were instructed, uplifted, and edified—and friends of the Church were greeted—as Elder Neil L. Andersen of the Quorum of the Twelve Apostles fulfilled assignments in Australia, Papua New Guinea, New Zealand, and French Polynesia.

In Papua New Guinea, Elder Andersen visited Koki Mountain, where in 1983 Elder L. Tom Perry of the Quorum of the Twelve Apostles dedicated the country for the preaching of the gospel. At the site he met with several long-time members who, as young children, were present at that dedication.  Elder Andersen thanked them for their faith and dedication over the years, which have helped the Church to grow in their homeland. “You have laid a foundation and have helped pave the way for the gospel to take root here in this great land,” Elder Andersen said. 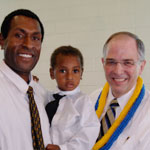 He also met with Papua New Guinea’s minister of health, Sasa Zibe, whose son is a Church member and a returned missionary who attends BYU–Hawaii. Zibe praised the Church for providing help during the recent cholera epidemic and for its efforts to inspire young people to achieve and progress.

Nearly 150 Church members from New Caledonia, who had traveled more than 1,000 miles to attend the Hamilton New Zealand Temple, were able to meet Elder Andersen during the New Zealand leg of his trip. Elder Andersen expressed his love for them and his appreciation for their faith and dedication—and did so in French, their country’s official language. Elder Andersen, who served as a missionary in the France Paris Mission and later as president of the France Bordeaux Mission, speaks fluent French, and so does his wife. 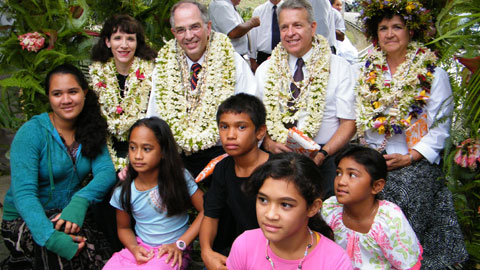 Elder Neil L. Andersen of the Quorum of the Twelve Apostles meets with members and missionaries of the Pacific Area.

“It is always remarkable to see the faith of those who give so much to attend the temple,” Elder Andersen said in an interview with the Church News. “The Spirit of the Lord was upon these saints in great abundance.”

At a fireside in New Zealand where he met with several hundred young adults, Elder Andersen emphasized the importance of never doubting, but exercising faith and courage.

“Trust in the Lord and keep His commandments,” he said. “Dig deep and pray sincerely and your faith will increase.”

Elder Andersen also visited with the President of French Polynesia, Gaston Tong Sang. They met in the president’s office in Papeete, Tahiti, and spoke in French. “We had a very warm visit where we talked about the role of the family and the importance of the Church in French Polynesia,” Elder Andersen said. “We also talked about his personal reflections of Church members, his visit in the temple [during the open house prior to its re-dedication], and his respect for the Church.”

In fulfillment of the scriptural call for Apostles to carry the gospel unto all the world (see Matthew 24:14, D&C 84:62, 114:1), members of the First Presidency and the Quorum of the Twelve Apostles often fulfill assignments to bring strength and encouragement to Church members and to conduct the business of the Church in various locations worldwide.

Accompanying Elder Andersen was his wife, Sister Kathy Andersen; and for all or part of his assignment, Elder Claudio R.M. Costa of the Presidency of the Seventy; Elder Tad R. Callister, Pacific Area President; Bishop Richard C. Edgley, First Counselor in the Presiding Bishopric; and Elder Brent Nielson of the Seventy, Second Counselor in the Pacific Area Presidency; and his wife, Sister Marcia Nielson.

Local Public Affairs offices contributed to this report, and some of the material in this report is taken from an article published by the Church News. Read the article