No One Else Can Do It

Part one of three. Read parts two and three.

“The priesthood of God is a power like nothing else on earth,” Elder L. Tom Perry of the Quorum of the Twelve Apostles told a priesthood leadership conference for several stakes in and around Centerville, Utah. “We ought to be certain that people understand what a great blessing it is to receive this priesthood and what it means in our Father in Heaven’s kingdom.”

He continued: “We are the children of Abraham [and we] have the responsibility of carrying the priesthood ordinances to the world. No one else can do it other than [those who have received] the powers of the priesthood, and we need every one of them.” 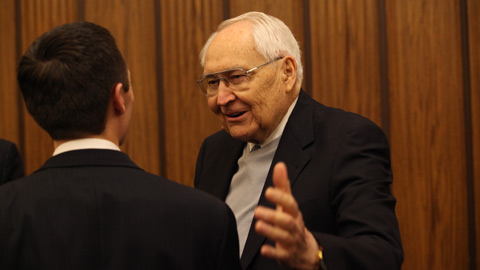 A priesthood leader receives a warm greeting from Elder Perry. “You have within your grasp the power and possibility of opening the doors of heaven,” Elder Perry told leaders at the priesthood leadership conference for stakes in and around Centerville, Utah.

Thanks to the Restoration of the gospel, Elder Perry said, the priesthood, with all of the authority of God, is given once again to Heavenly Father’s servants so that they can bless the whole earth. When we have that understanding, we also see the importance of bringing every priesthood holder into full activity in the Church. 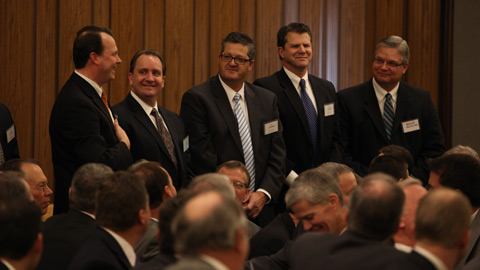 Bishops and stake presidents ask questions and share experiences with Elder Perry and other presiding officers. Elder Perry described the priesthood as a “powerful force,” an “effective, efficient” organization our Father in Heaven has given us.

At the meeting, held January 14 in the Farmington Stake Center, Elder Perry described the priesthood as a “powerful force,” an “effective, efficient” organization our Father in Heaven has given us, “and yet we find out that many … do not understand what a great blessing it is to be bearers of the holy Melchizedek Priesthood.” Referring to Doctrine and Covenants, section 84, he said, “We cannot let them enter the priesthood without understanding who they are and the responsibilities they are taking upon themselves to bear this holy priesthood.”

He explained that those who receive the priesthood “become agents of the Lord, to represent Him, to carry on the great ordinances. You have within your grasp the power and possibility of opening the doors of heaven.” He said, “The Lord thought so much about this He did it with an oath and a covenant.”

Elder Perry quoted the sixth President of the Church, Joseph F. Smith (1838-1918), who said, “There is no exaltation in the kingdom of God without the fulness of the priesthood.” He then explained that “every man who receives the priesthood does it with an oath and a covenant, and [if he is faithful] he shall be exalted. Think of the blessings of the Lord to us. The covenant on the man’s part is that he is willing to magnify his calling in the priesthood, and he will live by every word that proceedeth forth from the mouth of God and keep His commandments. The covenant on the Lord’s part is that if a man does as he promises, then the Lord shall give him [“all that the Father hath.] What a blessing it is to receive this great [priesthood].”

Looking Forward to the Blessing 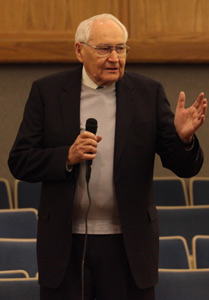 Elder Perry responds to a comment from a local leader. Part of the discussion centered on how to rescue those who are less active. “Just think what would happen if every ward had 10 more active Melchizedek Priesthood,” Elder Perry said. “It would literally change the Church.”

Rescuing Those Who Are Less Active

He also said it is important to make sure that those receiving the Aaronic Priesthood as well as those who have become less-active Melchizedek Priesthood holders or prospective elders should understand that neglecting the priesthood has consequences.

“I hope that sometimes we think about [the] responsibility that is ours to be certain they are properly trained in [the] priesthood before they are given the Melchizedek Priesthood and [that we as leaders] are careful that they understand the duties and responsibilities. … I hope this year we’ll turn the card a little by trying to make some effort on their rescue, to bring them back into the fold. And they will come back—it’s been so easy to reclaim them if we’ll go out and seek them.” 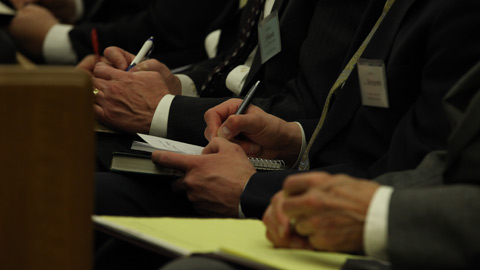 Priesthood leaders take note of what they feel inspired by the Holy Ghost to do in response to the teachings given by an Apostle.

He asked the leaders if they know how many less-active priesthood holders are in their stake or ward. “You should have that right on your mind. Now, if you don’t have it now, I want you to go home and find out and put it on your refrigerator door. I want you to look at that number every day … and think about it. These are active Melchizedek Priesthood brethren that need to be brought into the fold.”

In an interview following the meeting, he said, “That is the job of an elders quorum president and of a high priests group leader, really taking their lists, analyzing which ones are less active, and then praying about selecting maybe five at a time [to whom] we will carry the message of the gospel. … It is the process of really understanding and knowing the people well enough that the inspiration of the Lord will come and say this one will be receptive, and this is the one we should start working with.” 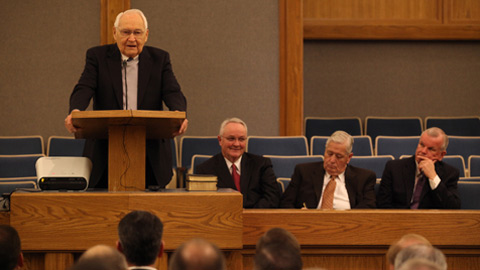 Church leaders, including Elder Craig G. Fisher, Area Seventy; Presiding Bishop H. David Burton; and Elder Steven E. Snow of the Seventy, listen as Elder Perry counsels with bishops and stake presidents. “We are the children of Abraham [and we] have the responsibility of carrying the priesthood ordinances to the world. No one else can do it,” Elder Perry said.

He said, “If you have good coordination with the full-time missionaries, they can fill in and do those 10 so that the missionaries are always teaching, every night, the gospel. Then, when you’re short, then you start calling ward missionaries to fill the responsibility of teaching these 10 families the duties of these basic principles of the gospel. Then we’re bringing them along. We have found this works very effectively if we’ll only do it. We can build our Father’s kingdom, we can fulfill our responsibilities, and we can be prepared for what the Lord has ahead of us in this great period that we’re engaged in today. … Just think what would happen if every ward had 10 more active Melchizedek Priesthood. It would literally change the Church. We would have 290,000 more active Melchizedek Priesthood. Now, that would be a great body to meet the challenge we have ahead of us.”

Blessings from the Rescue

Elder Perry said that seeing someone return to full activity brings great joy. “There is nothing like a prospective elder returning into the fold, because suddenly their whole outlook on life changes. … Think of what that does to a man. It prepares him spiritually to understand his relationship with God the Eternal Father and His Son, Jesus the Christ, first and foremost. It unites [him with] the Holy Ghost again in his life, to where that is an active force in leading, guiding, and directing him. It makes him a better husband, appreciative of his wife because he learns the true doctrine that comes. They are eternally linked together for time and for all eternity. And of course it makes him a better father because he can teach [his family] the gospel and understand it and be an example to them on how they should live.”

The culmination of the rescue effort, he said, is when those who are rescued go to the temple. “To me, that is the graduation day—when we have been able to get them through the course of study so that they understand the doctrines of the kingdom, been able to clean up their lives, been able to invite the Holy Spirit into their lives. They have made a commitment to our Savior, and the culminating event of this whole process will be being there with their sweet companions and their families and having those great blessing pronounced on their head for time and all eternity.” 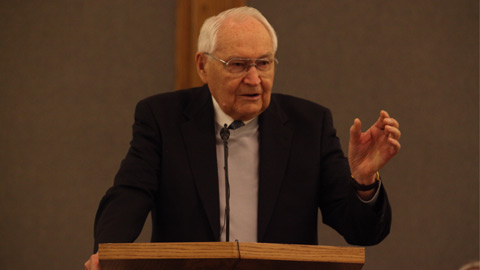 Elder Perry emphasizes that the priesthood can change lives for eternity. “What a blessing it is to receive this great [priesthood],” he said.

Elder Perry also told leaders that knowledge of how vital the priesthood is in blessing all of Heavenly Father’s children means helping each priesthood leader to magnify his calling.

“We have just got to build the priesthood,” he said. “We have got to relieve the bishop from … looking after the Melchizedek Priesthood and get that back to where a high councilor in the ward is training that high priests group leader and the elders quorum president to take that burden off the bishop. The bishop is the judge in Israel—they can’t do that. But they can teach them the gospel, build a brotherhood, and teach them [about] service in our Father in Heaven’s kingdom. That is a duty and responsibility we have got to assume and we have got to move forward.”

“I’ve never been with a bishop yet that didn’t feel burdened, that didn’t need more leadership in the ward,” he said. “When we activate somebody … they not only add service to that ward but they also take one more burden off of [the bishop’s] shoulders, because the father is the head of his family and what we want to do is have all fathers be the prime teachers of their children. When that happens, then that is a burden off the bishop because the father is assuming his burden and responsibility. Then the bishop can direct his efforts to the Aaronic Priesthood, building them and preparing them for the opportunity of receiving the Melchizedek Priesthood and becoming fathers themselves.”

“The priesthood of God,” Elder Perry concluded, “is the perfect organization. No other denomination, no other organization, has anything as effective as this in reaching the members of our faith and reaching outside to those that need to hear the gospel. Let’s build this priesthood organization, strong, vital, and alive, so that the elect of God can go forth and fulfill [their] assignment—proclaiming the gospel, perfecting the Saints, and redeeming the dead.”