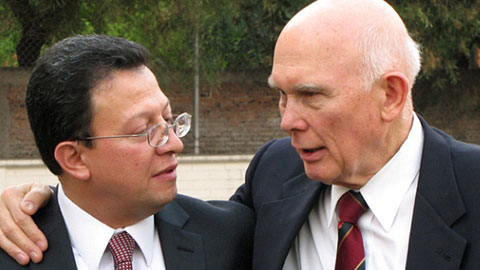 Form holy habits, obey the commandments, and develop righteous routines that will help you overcome temptation—these messages to Mexican youth are good counsel to all Latter-day Saints everywhere, and they were just some of the messages Elder Dallin H. Oaks and Elder Quentin L. Cook of the Quorum of the Twelve Apostles shared as they fulfilled assignments in Mexico.

In addition to their messages to youth, the apostles spoke at meetings for young single adults, missions, stakes, and auxiliaries, reassuring all who listened that the Lord loves the Latter-day Saints in Mexico, and He is counting on them to remain faithful even when there are difficult times ahead. Elder Oaks and Elder Cook —accompanied by Elder Ronald A. Rasband, senior president of the Presidency of the Seventy, and members of the Mexico City Area Presidency — delivered these messages as they ministered in Mexico from May 14-22, 2011.

Elder Oaks told the youth a story of two men who bought a truck, built a vegetable stand, and drove to the field on the other side of town to get a load of melons. They paid the farmer one dollar per melon. After driving back, they put the melons in their stand and sold them for one dollar each. The actions were repeated and on the third time, one partner said, “We are not making much money. Should we buy a bigger truck?”

The partners did not know that the melons were worth more in the stand than in the field, Elder Oaks pointed out. In the same way, youth need to decide the true value they place on the gospel, and measure their actions accordingly.

He said all of God’s children are asked to develop holy habits such as prayer, scripture study, taking the sacrament, and serving in callings. And though all should establish such holy habits, what are called righteous routines may be different from person to person. The youth were asked to determine for themselves righteous routines that would protect them from temptations they know they have. He blessed them to have a clear vision and the strength to do what is right.

Elder Oaks also spoke to the young single adults of the Mexico City Camarones and Veracruz Mocambo Stakes about the importance of setting practical goals and being able to adapt their dreams. He encouraged them to set general long-term goals — with the Lord’s guidance — rather than highly specific goals. He said that dreams without too much detail make it possible to create and achieve something wonderful rather than experiencing disappointment from pursuing unattainable specifics.

He noted that there is a difference between rewriting dreams (long-term goals) and abandoning standards. The most important dreams are of marrying a worthy spouse in the temple, then working together toward an eternal relationship. And in order to progress, it may be necessary to rewrite some dreams according to life’s circumstances. Don’t sit around waiting for the right one to come along, he said. Rather, conduct a life free from shame and move forward.

Elder Cook reassured missionaries in the Mexico City North Mission that they are where the Lord wants them to be and that through their work, they are blessing their loved ones at home as well as the areas in which they serve. Their goal, he said, should be to leave each area where they labor stronger, bigger, and more spiritual through their efforts.

He encouraged missionaries to teach with humility about Joseph Smith’s First Vision and the Plan of Salvation, and to get to know those they are teaching so that they will be able to personalize discussions to meet their needs.

Elder Cook counseled priesthood leaders to help missionaries to be better prepared as they enter the mission field. At a priesthood leadership meeting at the Mérida Brisas Stake Center, he encouraged leaders to continue to serve with sacrifice. He told bishops to study Alma 39 and delegate when possible in order to create more time to spend with the youth and single adults. In addition, he blessed the brethren to be able to stand faithful in trying times; to be able to guide their families, both spiritually and temporally; and to feel the Savior’s love through His blessings and His atoning sacrifice.

Elder Oaks and Elder Cook expressed love from the Lord and from the First Presidency to members of the Jalapa, Querétaro Los Arcos, Tierra Blanca, Toluca, Cancún Kabah, and Mexico City Tenayo Stakes. They told members to love their nation, obey its laws, love their neighbors, and strengthen their families.

The strength of the Church is in its members, Elder Oaks said. That strength comes from being united and from the fervent testimonies of the saints, as they do what Christ taught people to do, to love God and to love and serve their neighbors. These commandments help God’s children become like Him, he said.

In addition to encouraging members to increase their faith in Jesus Christ, Elder Cook called on them to strengthen their families. Children who are taught about the commandments during Family Home Evening, he said, will feel the Spirit of the Lord, even if it seems like they are not always listening. By following gospel principles, he said, members enable themselves to feel the love of Christ. Then they can bear witness to the fact that Christ marked the path that His children must follow to reach their eternal destiny.