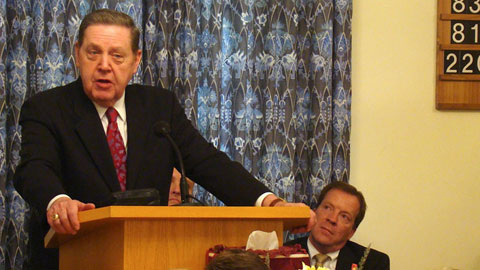 “Wherever we are in the world, Latter-day Saints will always be law-abiding citizens and good neighbors to everyone around us,” Elder Jeffrey R. Holland of the Quorum of the Twelve Apostles reminded Church members throughout the Middle East during a recent assignment that took him to several countries in the area.

“I love the Middle East,” Elder Holland declared. “We’re grateful to be there. In our meetings I encouraged the members to obey and sustain the laws of the countries they’re in. That’s been a blessing, as we’ve been allowed to meet together and to grow as a Church. We don’t proselyte, but we are growing as more of our members move to the Middle East.” He explained that most of that Church growth comes from expatriates who come to the area for business purposes or as domestic workers, many of them Filipinos.

Elder Holland expressed appreciation for how well the Church has been treated in the Middle East and for all that Church members have been allowed to do with regard to holding meetings “where we are allowed to meet” and acquiring property “where it is permitted” and needed. “Everyone has treated us so well,” Elder Holland said. “We could put a lot of water over the wheel of gratitude.”

Elder Holland said there were three principal reasons for his journey:

First, the Manama Bahrain Stake was divided to create the Manama Bahrain District and the Abu Dhabi Stake. Apostles often participate in the reorganization of districts and stakes and the calling of stake and district presidencies, Elder Holland explained. Because the number of Latter-day Saints in the area has tripled, from 900 when the first stake was formed 28 years ago to 2,700 today, a division was needed. The original Arabian Peninsula Stake was organized by Elder Boyd K. Packer, now President of the Quorum of the Twelve Apostles.

The Tel Aviv Branch has been in existence for 35 years, he said, and also noted that the Church has had a presence in Israel since the 1800s. Elder Holland also visited the Church’s Jerusalem Center and the Orson Hyde Memorial Garden, a gift to the city from the Church that is maintained by the local government.

Third, and perhaps most important, Elder Holland was in the area to minister to the needs of Latter-day Saints. “I loved meeting with the members,” he said. “I was so impressed by them and by the number of families with children. When you think of people going to the Middle East for business, you think of just the husband going, or perhaps the husband and wife. I was thrilled at the number of children in families that I met throughout the peninsula.”

In an interview following the trip, he said he was pleased to find during his visit that the young people of the Church attend seminary and do well in their schools, even when they’re the only members their age in the area. He said teenage participants in a question-and-answer session at a youth conference in Abu Dhabi “were asking great questions—not silly questions, or fun-and-games questions—but questions about the Resurrection and about helping friends get a testimony of living prophets. It was one of the best, most sophisticated question-and-answer sessions I’ve ever had.”

In some of the conferences at which he spoke, Elder Holland emphasized the history in the Book of Mormon account that tells of Christ visiting the Nephites to show that blessings are available, miracles do happen, and “times and places and people can be healed.”

Elder Holland said that none of the members had been directly endangered by the recent political turmoil, though they stayed informed on what was going on in neighboring locales. “No one was overly anxious about the unrest in the area,” he said, “but clearly it meant a great deal to them to have a reassuring visit from headquarters.”

In each country, Elder Holland prayed for blessings to come to both the members and their host countries. “We wanted everybody blessed,” he said. “And peace! We prayed for peace constantly. We prayed that governments would be wise, that people would be safe, that the land would be prosperous, and that children would grow up without fear.”

“Because the Church still has only a small presence in the Middle East, there is no Area Presidency or mission president,” Elder Holland said. “However, the members are fortunate to have an Area Seventy, Elder Larry S. Kacher, living and serving in the region. Beyond Elder Kacher, any ecclesiastical and temporal leadership comes from Church headquarters. We have the responsibility for the Church in that slice of the world, and so we feel a particular need to administer there.”