Reaching Many “Ones” in England

When Elder David A. Bednar of the Quorum of the Twelve Apostles arrived in Reading, England, for meetings with members, leaders, and missionaries, he knew he could not visit every person individually. The sheer number of members in Reading makes that impossible. Nevertheless, as a member of the Quorum of the Twelve Apostles, he understood fully his commission to bless the lives of members, both collectively and individually.

“The ministry of a member of the Twelve is always to find individuals,” he said, “following the principle from the Book of Mormon, ‘one by one.’ An Apostle is always searching for the ones the Lord sent him to find . . . to lift, to bless, to do something to help an individual or a family.  When meeting with a group of members, of youth, or of young single adults, it is not that there is an audience of fifteen hundred; there are fifteen hundred ‘ones.’” 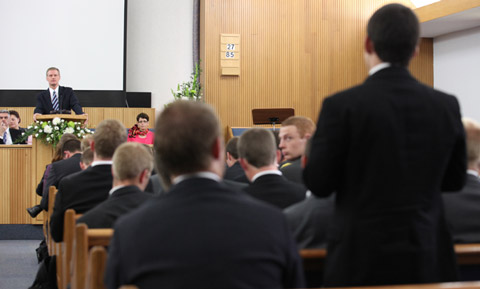 Elder Bednar listens to a missionary, then directs him to gospel doctrines and principles that may help him find an answer.

That is why Elder Bednar chose a question-and-answer format for meetings he held with missionaries, stake leaders, and young single adults. But the question-and-answer sessions did not involve Elder Bednar asking the questions; instead, he invited the members to ask him questions. Then, with love, he taught them doctrine and principles that would guide and assist them. Teaching in this way, he could call on individuals who most needed his counsel, even though everyone benefitted from the instruction. Elder Bednar was able, through the guidance of the Holy Ghost, to reach out to the ones the Lord had prepared and placed in his path. 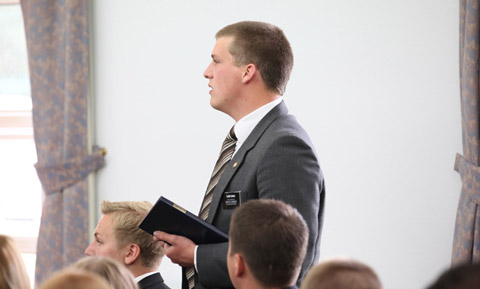 In an interview the day after one of the meetings, Elder Bednar said: “Anyone who was in the meeting with the young single adults last night would have been impressed by the authenticity, the openness, and the genuineness of the questions asked. My heart just reached out to several of those young people because of what they were asking and the sincerity with which they were asking.”

During the interview, Elder Bednar explained that “much of the world anticipates big results quickly. But the Lord builds a sure foundation and incrementally builds upon that foundation line upon line. If we go back to the early days of the Restoration, there were many converts in England. That pace is not the same now; it is slower. But in many of the areas where the missionaries are serving the converts continue to come one by one and learn line upon line; they are being retained. So there is steady growth.”

Goal Is to Help 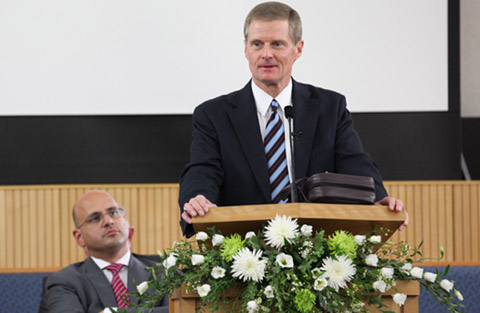 Elder Bednar explains that one reason for meeting with local leaders is to become better acquainted with their needs.

When Elder Bednar comes as a member of the Twelve to visit an area of the Church, he explained that “obviously, we bring points of emphasis from the First Presidency and the Twelve.  But my question to the Area Presidency is, ‘How can we best help you?’” He said that approach helps formulate what takes place during the meetings held in the area.  My heart yearns to be of assistance in some way so that the members will have the fortitude, the faith, the courage to keep pressing forward.” 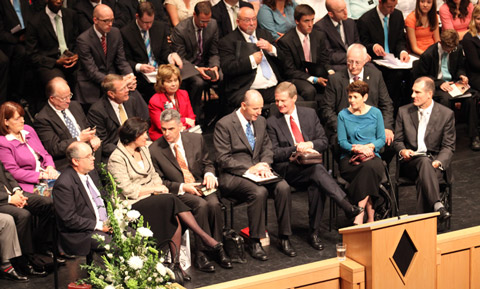 Elder Bednar visits with local leaders prior to one of the meetings recently held in Reading, England.

He also explained why it has become necessary to gather leaders and members from several stakes together at the same time. There are now nearly 3,000 stakes in the Church. With 12 Apostles, if Apostles were to visit one stake at a time in addition to their other duties, each stake would receive a visit approximately once every 27 years.

“With the continued growth of the Church, then that time interval is expanded,” he said. “The pattern we use now in priesthood leadership conferences allows us to . . . be face to face and shake the hand of all stake presidency members and bishops every four to five years.”

He said it is impossible to meet with every single member of the Church, “[but] we have multi-stake broadcasts . . . and [then] when we are in an area for a priesthood leadership conference, we can have an associated special stake meeting and meet face to face with the members.”

Acting Rather Than Being Acted Upon 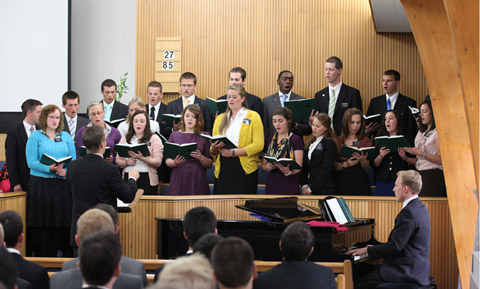 A missionary choir uses music to invite the Spirit into the meeting with Elder Bednar.

After these meetings in the United Kingdom, Elder Bednar also met with members in Denmark and Germany. He taught the members from the Book of Mormon: “We are agents who act for ourselves and not objects to be acted upon.” He also instructed from the Doctrine in Covenants that “we should be anxiously engaged in a good cause and the power is in us to do many things of our own free will.”

Elder Bednar expressed: “Worldly influences would hinder use of our agency afforded through the Atonement of Jesus Christ.  But we are agents who can act, and that affects everything in terms of how we live the gospel in our daily lives. It affects how we pray, how we study the scriptures, how we worship at church. There is a difference when one goes to a sacrament meeting essentially as an object waiting to be acted upon—‘Feed me, give me something’—as opposed to worshiping in sacrament meeting as an agent where you are acting—asking, seeking, and knocking. 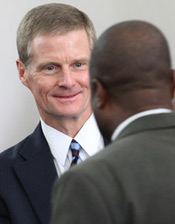 Elder Bednar ministers to one member at a time.

During the priesthood leadership conference, Elder Bednar said that “teaching is not just talking.” He said an effective teacher not only teaches how to do something but invites others to do it and learn for themselves.

He repeated counsel he has given before, that “testimony is knowing what is true by the power of the Holy Ghost. Conversion is consistently doing what you know to be true.”

Stressing the importance of teaching the gospel in the home, Elder Bednar noted that the Book of Mormon describes a mighty change of heart that will influence those who are converted to look outward at the needs of others, naturally leading to missionary work. He said that only through the Atonement of Christ can we put off the natural man and become like Christ.

Elder Bednar emphasized that the goal of all that we do in the Church is to invite people to come unto Christ, and the most effective way to do that is to help them to understand doctrine. “Don’t just talk or tell,” he said. “Help them to learn in a way that will invite change.”

He said that many times we forget we are agents with capacity to act. For example, Elder Bednar taught we may pray, “Save my children,” rather than “Increase my understanding and strengthen my vision so I can be an instrument in Thy hand to help them.” He also said that rather than praying that those who are not in sacrament meeting this week may be here next week, we ought to be praying for the courage to go find them and help them, and then go and do. 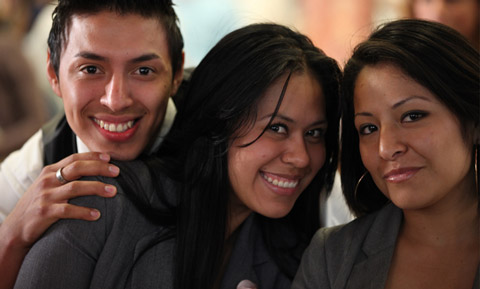 Young single adults eagerly anticipate the opportunity to receive counsel from an Apostle.

Elder Bednar advised young single adults that they can build faith in Heavenly Father by “exercising the moral agency to do the things they already know are right.”  He also offered counsel about following the Spirit. “When we are baptized and confirmed, the promised blessing is that we may always have the Holy Ghost to be with us. If you are consistently good, you will have the companionship of the Holy Ghost much of the time,” he said, and the issue will be recognizing when it leaves, not when it comes. Then, you will not want to do anything that causes the Spirit to withdraw.

Repentance, Elder Bednar said, is difficult but worth the price. “Sometimes the pain you experience is a necessary, purifying cleansing. . . . I promise you that in the long run, your anguish will lead to spiritual soothing.”

The Atonement is not just for sinners, Elder Bednar testified, but for good Latter-day Saints who are trying to do better. “As an Apostle of Jesus Christ, I testify that the Atonement applies in your case.”

As the question-and-answer session came to an end, he said, “We’ve talked, listened, and discussed. Hopefully you will hunger and thirst, ask, seek, and knock. You will not get the answer otherwise; you must learn for yourself from our loving Heavenly Father.” 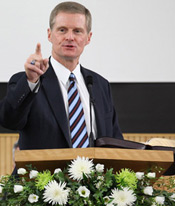 “Be the light. Share the gospel. Witness to others,” Elder Bednar admonishes the Saints in England.

During the stake conference, Elder Bednar noted that while Apostles are ordained witnesses of the name of Jesus Christ throughout the world, they are not the only witnesses. We are all witnesses, he said. “Be the light. Share the gospel. Witness to others.”

To help an individual undergo the mighty change of heart described in Mosiah, chapter 5, Elder Bednar suggested we should ask the question, “What is the doctrine we/they need to learn?” Quoting Doctrine and Covenants, section 101, which says that “every man may act in doctrine” (v. 78), he affirmed that it is an unusual phrase, but a true principle. “It is necessary that we act as agents,” he said, rather than objects waiting to be acted upon. “Become an agent who acts, seeks, and knocks.”

Elder Bednar explained that the Apostasy was foreseen in the Bible, but so was the Restoration. There are people who ask why God would call a prophet today, he pointed out. “I ask, why wouldn’t He? Where does it say in the Bible that He would no longer call and reveal His will to prophets? He continues to speak today as in ancient days, through apostles and prophets.”