Special Issue on the Book of Mormon Features Prophets and Apostles 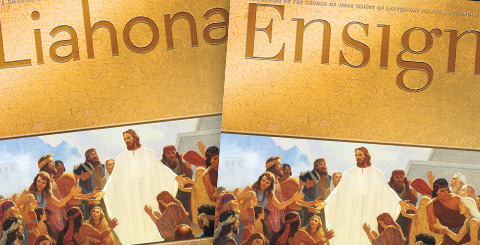 The Book of Mormon comes with “precious promises.” That’s what President Thomas S. Monson says about this book of scripture in a message published in the October 2011 editions of the Liahona and Ensign. This issue of the magazines focuses specifically on the Book of Mormon.

In his message, President Monson lists several promises made to those who study the Book of Mormon and tells of a personal experience when the Book of Mormon helped him provide the answer to a difficult question from a man who was dying.

“[Along] with other latter-day prophets, I testify of the truthfulness of this ‘most correct of any book on earth,’” President Monson writes in the First Presidency Message contained in the magazines. “Its message spans the earth and brings its readers to a knowledge of the truth. It is my testimony that the Book of Mormon changes lives.”

In addition to the message from President Monson, the issue features messages from several members of the Quorum of the Twelve Apostles who share their own thoughts about the Book of Mormon.

Elder Russell M. Nelson of the Quorum of the Twelve Apostles explains how the book shows us God’s love and how to gain that love in our lives.

“In these latter days we who are privileged to have the Book of Mormon, to be members of the Lord’s Church, to have His gospel, and to keep His commandments know something of God’s infinite love,” Elder Nelson writes. “We know how to make His love our own. As we become His true disciples, we gain the power to love as He does. As we keep His commandments, we become more like Him. We broaden our personal circle of love in reaching out to people of every nation, kindred, and tongue.”

It Leads Us to Christ

Applying Lehi’s dream to our day is the subject of a message from Elder David A. Bednar of the Quorum of the Twelve Apostles. He uses the dream to explain the difference between casual and sincere scripture study.

“Holding fast to the iron rod entails, in large measure, the prayerful, consistent, and earnest use of the holy scriptures as a sure source of revealed truth and as a reliable guide for the journey along the strait and narrow path to the tree of life—even to the Lord Jesus Christ,” he writes.

It Invites the Spirit

It Applies to Our Day

The Book of Mormon was written for our day and will help us face the many difficulties of our world, according to Elder Neil L. Andersen of the Quorum of the Twelve Apostles. He points out that the reason Mormon gave for writing the book is to convince all people that “Jesus is the Christ, the Eternal God.” He said we have this book now because the world we live in is full of distractions.

In the issue’s final article, Elder Jeffrey R. Holland of the Quorum of the Twelve Apostles shares his experience gaining a testimony of the Book of Mormon. He says that his testimony grows each time he reads and re-reads it.

“Not one of us can come to full faith in this latter-day work and thereby find the fullest measure of peace and comfort in our times until he or she embraces the divinity of the Book of Mormon and the Lord Jesus Christ, of whom it testifies,” he concludes.

Why you should read the Book of Mormon