The revelation in Doctrine and Covenants 46:2 is clear: “But notwithstanding those things which are written, it always has been given to the elders of my church from the beginning, and ever shall be, to conduct all meetings as they are directed and guided by the Holy Spirit.”

“I follow that,” President Boyd K. Packer of the Quorum of the Twelve Apostles said, quoting that scripture following a meeting he and Elder D. Todd Christofferson of the Quorum of the Twelve Apostles held with priesthood leaders in Sandy, Utah. In that meeting, President Packer and Elder Christofferson taught by word and by example what it means to conduct a meeting as directed and guided by the Spirit. 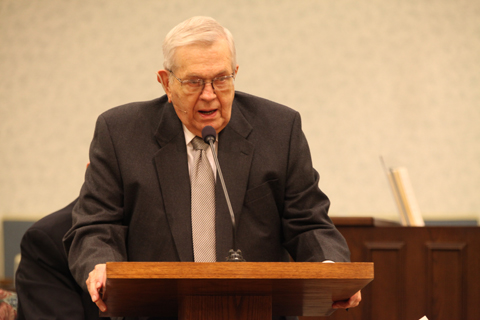 President Packer shares his testimony of Jesus Christ with Church leaders. “I think that is perhaps his greatest strength, that he makes it simple,” Elder Christofferson said of President Packer.

“Every member of the Church, male and female, [is] given the gift of the Holy Ghost after the very sacred ordinance of baptism,” President Packer said following the meeting, “and that gift promises that we will be prompted by the Holy Ghost, that He will be there to guide us and help us. I depend on that. I count on that.”

President Packer said courage is required to conduct meetings by the Spirit, but that “when we go by the Spirit, it just comes. Then you don’t have to invent or have anything unusual; you just teach.” 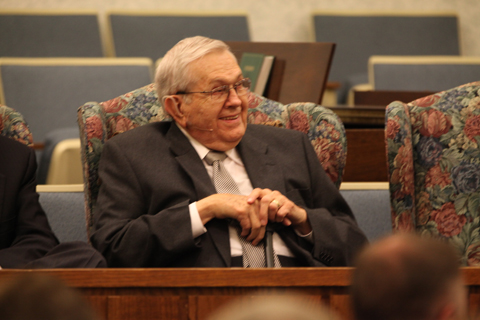 President Packer listens as leaders share concerns and questions. Later, Elder Christofferson commented that those in attendance at such meetings feel they are not only physically close to President Packer but that “they also feel close in spirit and in the sense of brotherhood.”

He said the Quorum of the Twelve Apostles follows this principle. “They have to be taught and we have to agree on what we are going to do,” he said. “Then everyone does it in his own way. But it takes constant prayer, preparation, and study as to what the Church needs where, so that we can speak to the present, pressing needs of the members of the Church.”

With regard to the role of the Apostles in conducting training conferences, he said, “I make the assignments. We circulate so that everyone is going. They are all very able, and I’d be teamed up with any one of them.”

He also said that scripture study is important for those seeking to be guided by the Spirit. “I know the thoughts [in the scriptures],” he said, noting that he remembers the counsel given in the scriptures when it is needed. 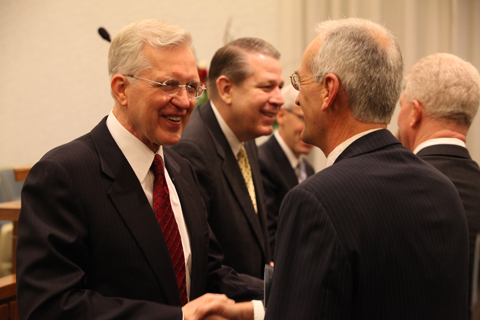 Elder Christofferson of the Quorum of the Twelve Apostles and Elder Donald L. Hallstrom of the Presidency of the Seventy greet local leaders as part of the meeting.

Nothing That Cannot Be Conquered

“There is nothing that cannot be overcome, cannot be conquered, cannot be dealt with, if you have the Holy Ghost,” Elder Christofferson told the leaders during the meeting.

Speaking of what he has learned from President Packer, Elder Christofferson said, “We all draw from our experience, as well as from the Spirit, but he seems to draw more from the Spirit than any other that I’ve been with or as much as any that I’ve ever seen.” 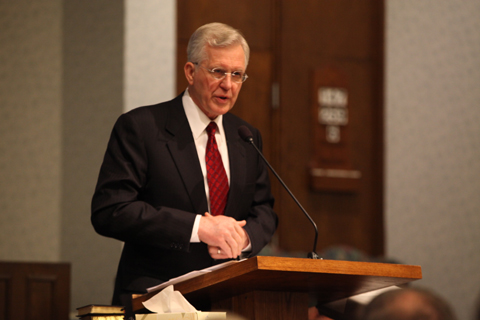 Elder Christofferson also bears an apostolic witness to those attending the meeting. “We are sharing a testimony that most anyone who hears it also possesses,” Elder Christofferson said. “But that being the first and foremost responsibility of an Apostle, to bear witness of Christ, is the thing that has the greatest impact.”

Elder Christofferson also noted that President Packer has many pertinent personal experiences to share that help people apply the gospel in simple ways. “Perhaps that is his greatest strength, that he makes it simple.”

Elder Christofferson said that in a setting where leaders can interact with each other, as they did in this meeting, President Packer’s personal warmth is felt, and those in attendance feel that they are not only physically close to him but are also close to him in spirit and in the sense of brotherhood. 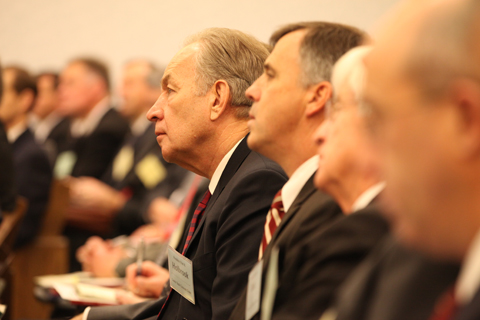 Leaders pay close attention as President Packer and others address them. “I think people appreciate all the instruction and counsel and answers to questions and so forth,” Elder Christofferson later said. But, he said, “there is a longing to hear the testimony of an Apostle.”

“I sense in these opportunities that there is a hunger, in a way, to just share an experience together where we all feel the Spirit, where we all are being taught according to our circumstances in an individual way,” Elder Christofferson said. “It’s a group meeting but an individual tutoring by the Spirit.”

Members of the Church look forward to meeting together, Elder Christofferson said, adding that they need to meet together as brothers and sisters in the gospel. “It’s powerful. That is part of the reason the Lord commanded that we have a Church—that we meet together often. It’s a renewing experience. It’s a reinforcing experience.” 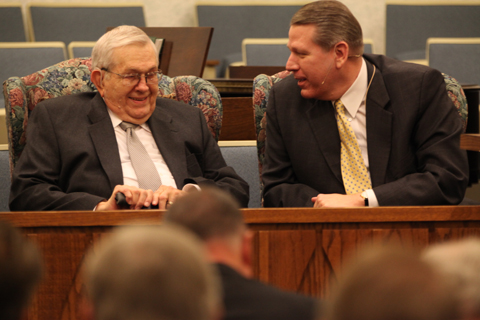 President Packer and Elder Hallstrom teach local leaders not only by what they say but also by example as they interact with each other.

Elder Christofferson also noted that a large part of the ministry of the Twelve is to help provide settings and opportunities for people to rejoice together in spirit and be refreshed, renewed, and strengthened.

He also said that the greatest service that an Apostle can provide to the people in and out of the Church is to bear witness of Christ. 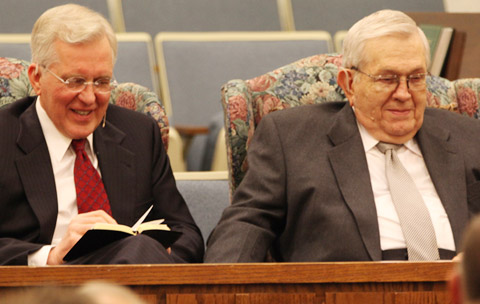 Elder Christofferson (left) and President Packer (right) prepare to counsel with leaders in Sandy, Utah, about learning from and following the Spirit.

“I sense that there is a longing to hear the testimony of an Apostle. [That is] the one thing that most satisfies those who come and participate,” Elder Christofferson said.  “I think people appreciate all the instruction and counsel and answers to questions and so forth, but the thing they most cherish is to hear that testimony. It isn’t that they don’t have it themselves—we are sharing a testimony that most anyone who hears it also possesses—but that being the first and foremost responsibility of an Apostle, to bear witness of Christ … has the greatest impact.”

The Spirit bears witness to those who hear such testimonies that they are true, and the Spirit bore that witness at the meeting.

The Spirit also guided President Packer and Elder Christofferson as they responded to questions from local leaders or delegated that response to Elder Donald L. Hallstrom of the Presidency of the Seventy or Elder Gary L. Crittenden, Area Seventy, who were also participating in the meeting.

These leaders, teaching local leaders, explained in words but also demonstrated by their interaction with each other and their use of the scriptures what it means to conduct a meeting “as directed and guided by the Holy Spirit.”