Learn of the Savior, Saints in Madagascar and Malawi Are Told

“Of all the people on the earth, members of this Church should know more about Jesus Christ than anyone else,” Elder Russell M. Nelson of the Quorum of the Twelve Apostles told Latter-day Saints in Africa as he fulfilled an assignment to meet with members, missionaries, and leaders in Madagascar and Malawi.

In a meeting with young single adults, Elder Nelson said that as they learn about the Savior they also learn about themselves. He reviewed many of the titles given to Jesus Christ and examined some of His responsibilities, beginning with the fact that He is the Son of God. Elder Nelson said knowledge of the Savior is crucial knowledge for all Latter-day Saints. He taught those in attendance that Heavenly Father created everything through His Son and that Jesus was the Jehovah of the Old Testament, the one who revealed Himself to prophets from Adam onward. 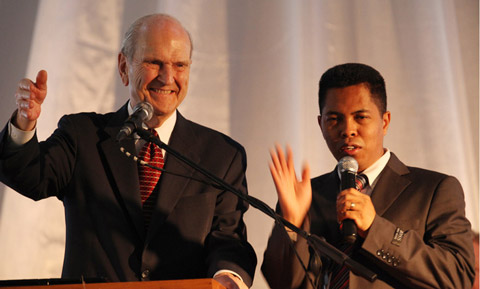 With the assistance of an interpreter, Elder Nelson gives encouragement to members in Madagascar.

Elder Nelson said that if we fill our thoughts with virtue we will fill our lives with confidence. He said the scriptures use the word virtue in two ways: (1) to refer to power, as when the Savior healed a woman in Luke, chapter 8, and (2) as purity, as when Peter encouraged disciples to add virtue to their faith in 2 Peter, chapter 1.

“As you perfect your own purity, you can draw power and righteousness into your lives,” he said. 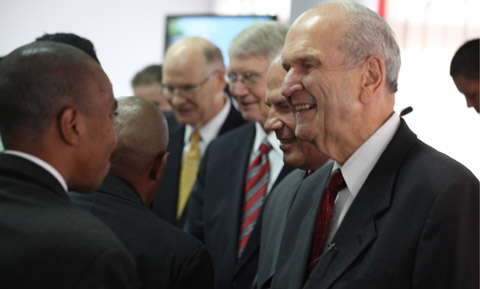 Following the Friday, October 21, meeting with young single adults, Elder Nelson met on Saturday morning with stake presidents, bishops, branch presidents, and other leaders from Madagascar and surrounding islands. He encouraged them to find answers to their concerns and questions by using the scriptures, the handbooks, and priesthood leadership broadcasts. “The most important teaching you get will be from the Holy Spirit,” he said.

He told priesthood leaders to encourage members to find their own answers to life’s challenges through prayer and scripture study, coupled with obedience.

“When people come to you with a question about behavior, try to give an answer that is on a higher level,” he said. “In other words, answer a behavioral question with doctrine or with a principle. That will enable them to answer their own behavioral questions better. What you’d like to do is develop spiritual self-reliance as well as temporal self-reliance. Help your people to pray for their own answers.” 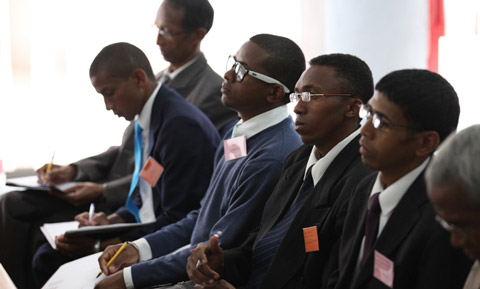 Leaders listen attentively as Elder Nelson encourages them to help members search for inspiration through scripture study and prayer.

As he spoke with leaders in this country where 50 percent of the people live below the poverty line, Elder Nelson encouraged everyone to look to the gospel for hope. “Keep the commandments of God without reservation, and you will be prepared to meet Him. Pay your tithing. Say your prayers. Be kind to your wife. Love your children. You prepare for eternal life, and all the Father has will be given to you.” 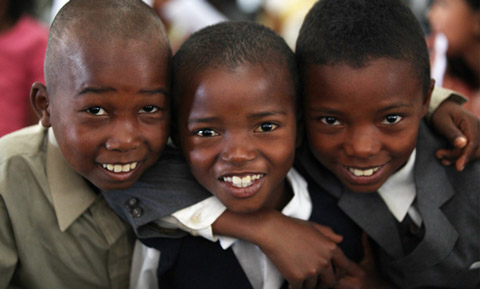 Children are excited to know they will hear from an Apostle during their stake conference.

Elder Nelson spoke on Sunday to more than 2,000 men, women, and children attending a combined stake conference for the Madagascar Manakambahiny Stake and the Antananarivo Madagascar Ivandry Stake. He had the children stand up so he could see them, then asked the parents to teach their children well. He encouraged them to: 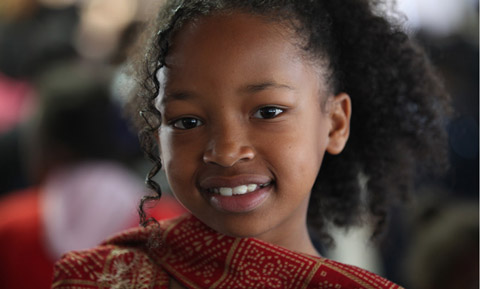 A girl from Madagascar knows that education is important, in part because Elder Nelson said so.

Elder Nelson also told those in attendance to help their children to know who the Son of God is. “The Atonement of Jesus Christ will make it possible for us to be resurrected from the grave, and it also enables us to qualify for the blessings of the temple.”

Be Worthy and Prepare 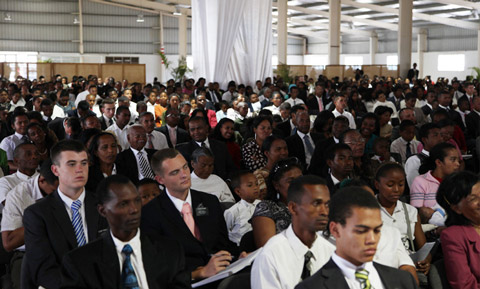 A congregation of more than 2,000 listens as Elder Nelson counsels them to pay their tithing and to obtain a temple recommend as an indication of their worthiness and preparation.

In response to questions about when a temple might be built in Madagascar, Elder Nelson said he didn’t know the answer. He said those decisions are made by the President of the Church. He encouraged members to pay their tithing and to get a temple recommend as an indication of their worthiness and preparation. Even though the temple may be at a distance, “you are not far from the temple if you have a temple recommend,” Elder Nelson said.

“In a way, you will decide when there are sufficient numbers of people worthy of a temple, and a temple may come to this country,” he said. “Meanwhile, you can have a picture of the temple in your home. Let these precious children see that in their mind every day.” 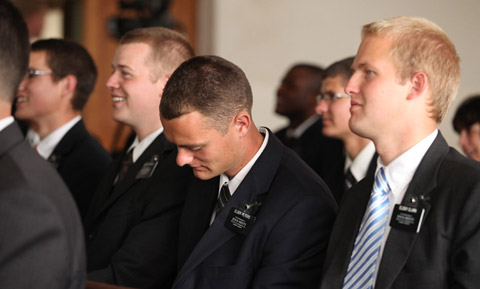 Missionaries hear Elder Nelson’s message that they are just beginning a lifetime of sharing gospel joy.

Elder Nelson also met with the missionaries serving in Madagascar. He encouraged them to be witnesses, to set wise goals, and to keep the spirit of general conference alive by reading and rereading the conference addresses.

He also told them that even if they’re nearing the completion of their full-time missionary service, they are just beginning a lifetime of missionary service. “You’re really in training for the greatest part of your mission, which is when you get back home, among your own people, among your own loved ones,” he said, encouraging them to live the gospel with joy throughout their entire life. 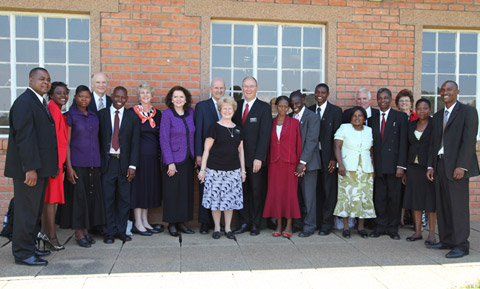 While fulfilling assignments in Africa, Elder Russell M. Nelson of the Quorum of the Twelve Apostles dedicated the country of Malawi.

“As an Apostle of the Lord it was my honor and privilege today to offer a special prayer for this country, for its people, and for its leaders,” he told government officials and members of the press. “You will find a great change will come over the country, all for the good, as the blessings of the Lord Jesus Christ are extended as the prayer was given today.”

He later explained the significance of the dedication to missionaries he met with in Blantyre, the second largest city in Malawi, by quoting Doctrine and Covenants 132:47, which says, “Whomsoever you bless I will bless.”

The dedication, which took place on October 25, 2011, included a prayer and a blessing on the land and the people. Elder Nelson said the dedication will have long-lasting effects on the country.

“It means a completely different future. It’s like a train going down a railroad track, and the tracks are turned, so with the passage of time it turns and goes a different direction,” he said.

While in the country, Elder Nelson also met with government officials and members of the media. Elder Nelson said the First Presidency and the Quorum of the Twelve Apostles made the decision to dedicate Malawi and that he was given the responsibility for the dedication a few weeks prior to the beginning of his travel.

Malawi is a nation of about 14 million, located in southeast Africa. It is part of the Zambia Lusaka Mission. The Church was officially recognized in Malawi in 1995. The first meetinghouse was dedicated in 2005, and the Blantyre District was organized on April 10, 2011. Today the Church has 925 members in four branches.