“You are some of the most precious children on earth, and God loves you,” Elder Richard G. Scott of the Quorum of the Twelve Apostles told Latter-day Saints of Mozambique recently while he was in the Africa Southeast Area. Eleven years after dedicating this country for the preaching of the gospel, Elder Scott returned in January 2011 to find that the Church has made great progress. 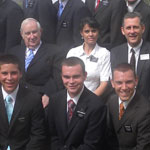 On Elder Scott’s first visit, there were only 40 Church members in Mozambique, and the country was part of the South Africa Johannesburg Mission. At the time of his second visit, the Church had grown to more than 5,000 members spread throughout two districts, 19 branches, and three groups meeting across the country. Mozambique is also the headquarters to the Mozambique Maputo Mission, which covers all of Mozambique and the country of Angola (on the southwest coast of Africa).

Elder Scott delighted members by speaking Portuguese, the official language of Mozambique, when he addressed them. He expressed his love for them and bore his testimony, saying, “Always remember and never forget that one of the Apostles of Jesus Christ declared in your presence that Jesus Christ lives.”

Some of the meetings Elder Scott addressed during his visit were attended by more than 900 people, including members who had traveled two days to be present. He taught members that Heavenly Father would help them attend the temple if they did the best they could to get there, and that happiness can come from something as simple as a smile. He encouraged the members to study the scriptures, follow Christ’s teachings, and express love for their families.

Before leaving, Elder Scott took time to meet and thank a group of doctors who were in Mozambique with the Church’s humanitarian aid program, teaching neonatal resuscitation training to local doctors, nurses, and midwives.