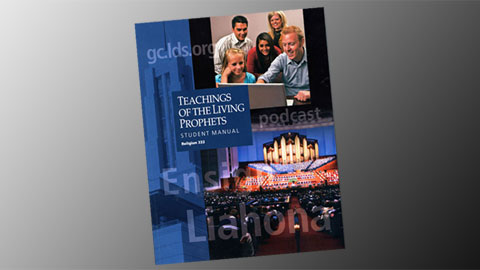 What have living prophets said since the gospel was restored to the earth? Who are today’s prophets and apostles, and how well are you listening to—and responding to—what they say?

To hearken means to listen and obey, and a new Church Education System manual encourages institute students and others to hearken to the voice of prophets and apostles from the Restoration to the present day.

“From the prophet of the Restoration to the prophet of our own year, the communication line is unbroken, the authority is continuous, a light, brilliant and penetrating, continues to shine,” said President Spencer W. Kimball (1895-1985), the twelfth president of the Church. He is quoted in the manual, as are all of the others quoted in this article.

Our Need for the Living Prophet

One of the main duties of a prophet is to bear witness of Jesus Christ. The Lord reveals His will to the prophets and by following the their counsel, we can be sure that we are on a path that will enable us to return to live with our Father in Heaven.

“By the authority vested in [the living prophet], all ordinances of the gospel are performed, all teaching of the truths of salvation is authorized, and through the keys which he holds, salvation itself is made available to men of his day,” said Elder Bruce R. McConkie (1915-1985) of the Quorum of the Twelve Apostles.

The Church is, in fact, built on the foundation of prophets and apostles, with Christ as the chief cornerstone. (See Ephesians 2:20.) Eternal doctrines do not change, but the words of the living prophet are inspired eternal truths for modern day. (See Amos 3:7.)

“It is no small thing, my brothers and sisters, to have a prophet of God in our midst,” said Elder M. Russell Ballard who has served in the Quorum of the Twelve Apostles since 1985. “When we hear the counsel of the Lord expressed through the words of the President of the Church, our response should be positive and prompt. History shows that there is safety, peace, prosperity, and happiness in responding to prophetic counsel as did Nephi of old: ‘I will go and do the things which the Lord hath commanded (1 Nephi 3:7).’”

A House of Order

The Lord has established a succession in the presidency of the Church that allows His work to continue without interruption. Latter-day Saints are asked to sustain the inspired leadership and live in accordance with their inspired teachings and their counsel.

“The work of the Lord is endless,” President Kimball said in his April 1970 general conference address. “Even when a powerful leader dies, not for a single instant is the Church without leadership, thanks to the kind Providence who gave his kingdom continuity and perpetuity.”

While serving as a member of the Quorum of the Twelve Apostles, the eighth president of the Church, George Albert Smith (1870-1951) explained what it means to sustain the prophet:

“The obligation that we make when we raise our hands under such circumstances is a most sacred one,” he said. “It does not mean that we will go quietly on our way and be willing that the prophet of the Lord shall direct this work, but it means, – if I understand the obligation I assumed when I raised my hand – that we will stand behind him; we will pray for him; we will defend his good name, and we will strive to carry out his instructions as the Lord shall direct him to offer them to us while he remains in that position.”

Prophets and apostles hold the priesthood keys of the Kingdom of God. Prophets are to declare the pure doctrines of the Lord, and apostles are to build the Kingdom of God throughout the world. Together, they are to perfect the saints, minister in the work of God, and edify the body of Christ until all God’s children unify in faith and knowledge of their Redeemer. (See Ephesians 4:11-13.)

“Their one chief concern must be the advancement of the work of God in the earth,” said the fifteenth president of the Church, Gordon B. Hinckley (1910-2008). “They must do all that they can … not out of belief but out of a certain knowledge of the Son of God, their Friend and Master, whose servants they are.”

Our Role in General Conference

Twice each year, prophets and apostles and other Church leaders provide messages for members of the Church and for all people everywhere during a sacred series of meetings called general conference.

Elder Jeffrey R. Holland, who has served in the Quorum of the Twelve Apostles since 1994, describes each conference as a call to action. General conference is an opportunity to hear the words of the Lord.

President Thomas S. Monson said, “As we read and study [general conference messages], we will be additionally taught and inspired. May we incorporate into our daily lives the truths found therein.”