How to Survive in Enemy Territory 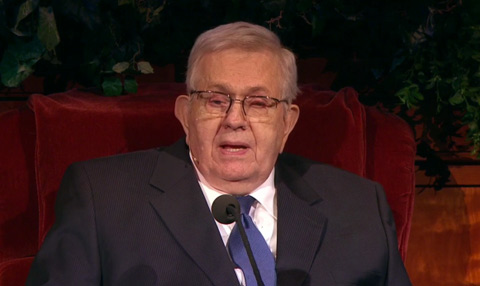 “You are growing up in enemy territory,” President Boyd K. Packer of the Quorum of the Twelve Apostles told youth during a broadcast commemorating 100 years of seminary. “When you become mature spiritually, you will understand how the adversary has infiltrated the world around you. He is in homes, entertainment, the media, language—everything around you.”

But, President Packer added, “You are not ordinary. You are very special. You are exceptional.” And he offered counsel about how to survive in enemy territory.

Get Wisdom and Get Going

“I speak as one who has seen the past and would prepare you for the future,” President Packer said to seminary students and their parents gathered in the Conference Center in Salt Lake City, Utah, on January 22, 2012. Over the last 50-plus years, and during more than 2.5 million miles of worldwide travel, President Packer has watched the seminary program begin with a dozen children sitting in a one-room home, then grow to 375,008 students in 143 countries, with more than 38,000 volunteer and full-time teachers worldwide.

A timeline from the video shows the growth of seminary, beginning with 70 students in 1912.

President Packer reminded youth of the counsel in the scriptures, “Wisdom is the principal thing; therefore get wisdom,” to which he added, “with all thy getting, get [going!] (see Proverbs 4:7). I do not have time to waste and neither do you. So listen up!”

Be Guided by the Holy Ghost

“You have been taught all of your lives about the gift of the Holy Ghost, but teaching can only go so far,” he said. “You can and, in fact, you must go the rest of the way alone to discover within yourself how the Holy Ghost can be a guiding and protective influence.”

Learning how the Holy Ghost operates in each individual life is, President Packer said, the quest of a lifetime. “Once you have made that discovery for yourself, you can live in enemy territory and [you] will not be deceived or destroyed. No member of this Church—and that means each of you—will ever make a serious mistake without first being warned by the promptings of the Holy Ghost.”

“You cannot lie or cheat or steal or act immorally and have those channels remain free from disruption. Do not go where the environment resists spiritual communication,” President Packer said.

“First on your ‘to do’ list, put the word prayer,” he said. “Most of the time, your prayers will be silent. You can think a prayer. … Do not allow the adversary to convince you that no one is listening on the other end. Your prayers are always heard. You are never alone!”

Next, President Packer said, take care of your body. Be clean. Follow the Word of Wisdom. “Stay away from tattoos and similar things which deface your body. Do not do that which would dishonor yourself, your parents, or your Father in Heaven. Your body was created in His image.”

He continued, “Add, ‘repent often’ to your list of things to do. This will bring you lasting peace that cannot be purchased at any earthly price. Understanding the Atonement may be the one most important truth that you can learn in your youth.

“You have been taught at home and in seminary about the Atonement of Jesus Christ. The Atonement is like an eraser. It can wipe away guilt and the effect of whatever it is that is causing you to feel guilty. Guilt is spiritual pain. Do not suffer from chronic pain.

“There are other things we could add to the list, but you know what you should and should not be doing in your life. You know right and wrong and do not need to be commanded in all things,” President Packer said.

Be a Disciple of the Savior

He noted, “One thing that I have learned about young people through all of these years: You not only can take the truth, but you want to know the truth.” He then gave an example.

“We know that gender was set in the premortal world. ‘The spirit and the body are the soul of man.’ This matter of gender is of great concern to the Brethren, as are all matters of morality,” he said.

“A few of you may have felt or been told that you were born with troubling feelings and that you are not guilty if you act on those temptations,” President Packer said. “Doctrinally we know that if that were true your agency would have been erased, and that cannot happen. You always have a choice to follow the promptings of the Holy Ghost and live a morally pure and chaste life, one filled with virtue.”

President Packer counseled youth to use their agency wisely and to deny acting on impure impulses or unholy temptations. “Just do not go there, and if you are already there, come back out of it. Deny yourselves of all ungodliness. … Do not tamper with the life-giving powers in your body alone or with members of either gender.”

President Packer noted that it is natural to resist restraints of any kind and that youth generally do not like to be told what to do, “but if immoral conduct is a temptation for you, I plead with you to do all in your power to overcome it, however difficult it may be.”

Discipline Is the Key

“The key word is discipline—self-discipline. The word discipline comes from the word disciple or follower. Be a disciple/follower of the Savior, and you will be safe. … You can resist temptation.”

President Packer closed by saying, “Do not squander these years of seminary instruction. … If you want to be happy, you must pay the price through obedience. The restraints that you face against wrongdoing are an enormous protection for you. We have deep, profound faith in you.” 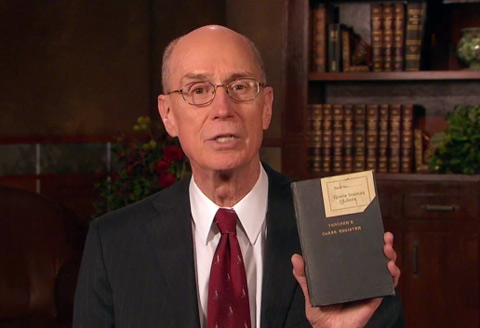 President Eyring shows the roll book from the first seminary class. His mother signed it when she was a 16-year-old student.

The seminary centennial broadcast also featured a video narrated by President Henry B. Eyring, First Counselor in the First Presidency. In the video, President Eyring traced the history of seminary, including a member of the first seminary class, who would later become his own mother!

“In this roll book appeared a name I recognized—a young lady who was 16 years old back in 1912. She was one among many students who was learning the gospel,” President Eyring said, showing the book. He said there were 70 students in that first seminary class taught by Thomas Yates. “Twenty years later, that beautiful young lady, Mildred Bennion, would become my mother.

“She was the daughter of a man we would today call less active. Her mother, my grandmother, was a widow in the autumn of 1913. Some thoughtful individual in that day must have invited Mildred to seminary. Someone caught a glimpse of how this program would bless the lives of each and every young man and woman in the Church.

“And that one seminary teacher cared enough about Mildred Bennion and prayed fervently enough that the Spirit put the gospel down into her heart. That teacher blessed the lives of tens of thousands of unseen individuals because of the message he taught one girl.” 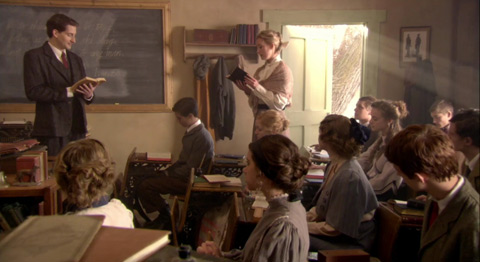 A video shown at the broadcast depicts scenes from the first seminary class.

He said that “Mildred Bennion, Thomas Yates, and many others like them laid the foundation of this rich and glorious history of seminary and Church education” and added that “what happened in that first classroom is what happens today and will continue to happen time and again, however large our numbers grow—the one will be touched, a testimony will be found or strengthened, and generations to come will be blessed for it.”

The video also includes quotes from youth who have studied or who are currently studying in seminary in various countries around the world. “In the 100 years of seminary that have come and gone, countless lives have been touched,” President Eyring said. “Our task has been and will always be to teach and to learn so that the gospel of Jesus Christ will go down into the heart of the one—the individual son or daughter of Heavenly Father.

“Our goal is to teach and learn eternal truth in such a way that a child of God can choose to know and to love our Heavenly Father and His Beloved Son. To you remarkable young men and women who are students, I encourage you—no matter the challenges you face—to attend seminary. Hunger and thirst to know and to do that which the Savior taught. In so doing the Spirit of the Lord will be your constant companion, and He will strengthen you for the battles you will face and the great work you will perform in families and in the Church.”

Read a news story and watch a video commemorating 100 years of seminary.