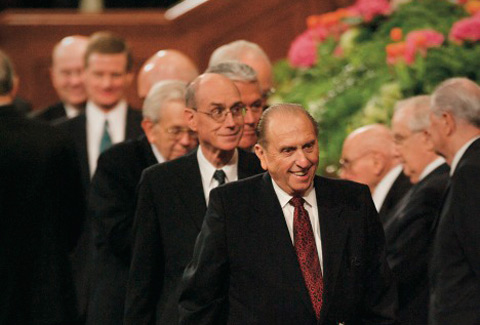 Honesty truly is the best choice, President Thomas S. Monson says, and he looks to the Prophet Joseph Smith as an example.

“A few days after his prayer in the Sacred Grove,” President Monson says, “Joseph Smith gave an account of his vision to a preacher with whom he was acquainted. To his surprise, his communication was treated with ‘contempt’ and ‘was the cause of great persecution, which continued to increase.’

“Joseph, however, did not waver. He later wrote, ‘I had actually seen a light, and in the midst of that light I saw two Personages, and they did in reality speak to me; and though I was hated and persecuted for saying that I had seen a vision, yet it was true. … For I had seen a vision; I knew it, and I knew that God knew it, and I could not deny it.’ [See Joseph Smith—History 1:21–25.]

“Despite the physical and mental punishment at the hands of his opponents which the Prophet Joseph Smith endured throughout the remainder of his life, he did not falter,” President Monson says. “He taught honesty—by example.”

A Test of Integrity

“Perhaps the surest test of an individual's integrity,” President Monson says, “is his refusal to do or say anything that would damage his self-respect.”

President Monson has also counseled that the principle of honesty is not outdated. Rather, it is particularly important in our world today.

“In our time,” he says, “when otherwise honorable men bend the law, twist the law, and wink at violations of the law, when crime goes unpunished, legally imposed sentences go unserved, and irresponsible and illegal conduct soars beyond previously recorded heights, there is a very real need to return to the basic justice that the laws provide when honest men sustain them.”

And President Monson says: “It has been said that conscience warns us as a friend before it punishes us as a judge. The expression of one young man is a sermon in itself. When asked when he was happiest, he replied, ‘I’m happiest when I don’t have a guilty conscience.’”

“That We May Touch Heaven”

“In Quest of the Abundant Life”