“When our hearts are filled with the love of God, something good and pure happens to us,” said President Dieter F. Uchtdorf, Second Counselor in the First Presidency.

In his message, delivered during the April 2012 general conference, President Uchtdorf also discussed what can happen when our hearts are not filled with love. “Strained and broken relationships are as old as humankind itself. Ancient Cain was the first who allowed the cancer of bitterness and malice to canker his heart,” President Uchtdorf said. “Since those first days the spirit of envy and hatred has led to some of the most tragic stories in history. It turned Saul against David, the sons of Jacob against their brother Joseph, Laman and Lemuel against Nephi, and Amalickiah against Moroni.”

“I imagine that every person on earth has been affected in some way by the destructive spirit of contention, resentment, and revenge,” President Uchtdorf said. “Perhaps there are even times when we recognize this spirit in ourselves. When we feel hurt, angry, or envious, it is quite easy to judge other people, often assigning dark motives to their actions in order to justify our own feelings of resentment.” 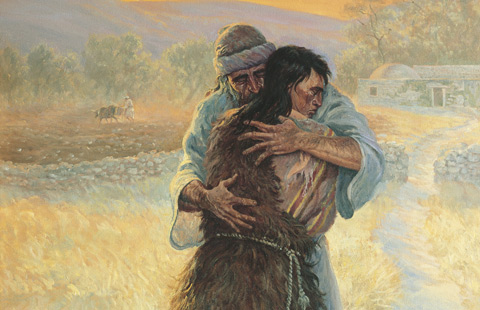 What the Savior Taught

President Uchtdorf said that the doctrine Christ taught about forgiveness is clear: “Forgive one another; for he that forgiveth not … [stands] condemned before the Lord; for there remaineth in him the greater sin.” He also taught that “blessed are the merciful: for they shall obtain mercy.”

President Uchtdorf noted that the commandment to forgive others seems reasonable when applied to someone else. “We can so clearly and easily see the harmful results that come when others judge and hold grudges,” he said, “and we certainly don’t like it when people judge us.

“But when it comes to our own prejudices and grievances, we too often justify our anger as righteous and our judgment as reliable and only appropriate,” he said. “Though we cannot look into another’s heart, we assume that we know a bad motive or even a bad person when we see one. We make exceptions when it comes to our own bitterness because we feel that, in our case, we have all the information we need to hold someone else in contempt.”

Everyone, he said, depends on the Savior—none of us can be saved without Him. However, forgiveness of our sins comes on the conditions that we repent and are willing to forgive others.

It is important to note, President Uchtdorf said, that forgiving all men also includes forgiving ourselves.

Mercy through the Atonement

During April general conference, counsel about forgiving and being forgiven was provided several times. For example, Elder Jeffrey R. Holland of the Quorum of the Twelve Apostles spoke of forgiveness as related in the parable of the workers in the vineyard (see Matthew 20:1–15).

“This parable—like all parables—is not really about laborers or wages any more than the others are about sheep and goats,” Elder Holland said. “This is a story about God’s goodness, His patience and forgiveness, and the Atonement of the Lord Jesus Christ. It is a story about generosity and compassion. It is a story about grace. It underscores the thought I heard many years ago that surely the thing God enjoys most about being God is the thrill of being merciful, especially to those who don’t expect it and often feel they don’t deserve it.”

“I do not know who in this vast audience today may need to hear the message of forgiveness inherent in this parable, but however late you think you are, however many chances you think you have missed, however many mistakes you feel you have made or talents you think you don’t have, or however far from home and family and God you feel you have traveled, I testify that you have not traveled beyond the reach of divine love. It is not possible for you to sink lower than the infinite light of Christ’s Atonement shines.”

President Henry B. Eyring, First Counselor in the First Presidency, also spoke at conference about the importance of forgiveness. He told the story of a woman who had found the faith to forgive a person who had wronged her for years. “I was surprised and asked her why she had chosen to forgive and forget so many years of spiteful abuse,” he said.

“She said quietly, ‘It was the hardest thing I have ever done, but I just knew I had to do it. So I did.’ Her faith that the Savior would forgive her if she forgave others prepared her with a feeling of peace and hope as she faced death just months after she had forgiven her unrepentant adversary,” he said.

Watch a Mormon Message on Forgiveness.