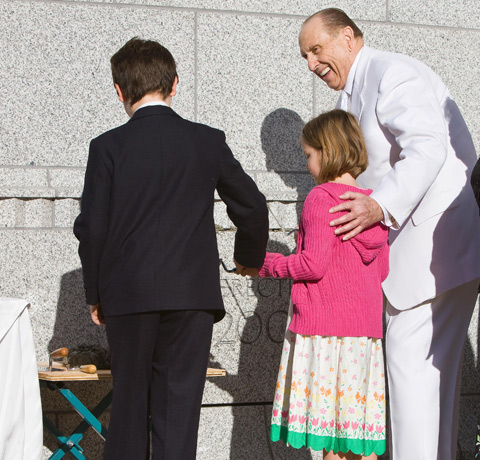 “[The] magnificent Kansas City Temple … will shine as a beacon of righteousness to all who will follow its light, the light of the gospel, the light of the Savior,” President Thomas S. Monson told congregations gathered to celebrate the dedication of the Kansas City Missouri Temple. He described Kansas City as “a lovely part of the country, really the heartland of America,” an especially meaningful area for Latter-day Saints because of the sacred events that happened in the area during the early days of the Church.

During his visit, President Monson presided at the temple’s three dedication ceremonies, sealed the temple cornerstone by adding the final mortar, and attended a musical celebration put on by 3,000 local LDS youth.

Elder Jeffrey R. Holland of the Quorum of the Twelve Apostles accompanied President Monson and described the Kansas City Missouri Temple as a symbol of the faith of early Church members and the hope of current Latter-day Saints in Missouri.  “Remembering all those generations who were here before and moved on, [who] didn't get to stay, didn't get to have this chance, … add[s] to the feeling I think we have all had today,” Elder Holland remarked.  "I think it is a great lesson about promises kept and dreams that we need to hold on to, [and] to keep faith with the journey we're on, and that journey will take us back to a lot of the places we thought maybe we missed along the way."

Read more about the Kansas City Missouri Temple dedication at—