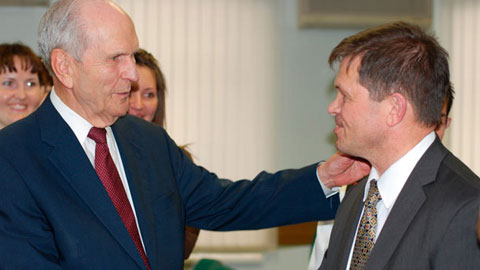 The first stake in Russia is “one stake [now], but there will be other stakes in the future,” Elder Russell M. Nelson of the Quorum of the Twelve Apostles said during a historic visit to Russia in June 2011, during which he created the Moscow Russia Stake. During the first stake conference ever held in Russia, he said, “We will need many, many Russian missionaries. The Russians will be our best missionaries here in Russia.”

Elder Nelson has come to Russia several times in the past 45 years. “I love the Russian Saints,” he told the members, adding that he has loved Russia since his first visit in 1966. At that time, before he was called as an Apostle, he came as a surgeon with the American Heart Association to train Russian surgeons. In 1991, Elder Nelson was able to rededicate Russia for the preaching of the gospel in the same location in which Elder Frances M. Lyman had originally dedicated the country almost 100 years earlier.

Acknowledging the Russian members’ hopes for a temple in their own country, he said that he is frequently asked when there will be a temple in Russia and in what city it will be. His answer, always the same, is “you’ll decide.” He told them that building a temple is much easier than building the people to fill the temple. In the meantime, he said, “What a great blessing it will be to have an ordained patriarch in [this] newly formed stake,” rather than having members wait for years to receive their patriarchal blessings.

“The most important priesthood duty you have is to care for [your wife],” Elder Nelson told priesthood leaders in a priesthood leadership conference prior to the stake conference. “All we do otherwise is for naught if we do not care for our wives and children. Families come first in the Church.” Reminding his audience that we are part of Heavenly Father’s family and that He wants us to be with Him forever, he said that the priesthood was given to men in order to bless His children.

He also encouraged members to do family history work, including genealogy, and to submit names to the temple. He said, “Your ancestors need your help, and you need their help.” At the same time that we look to the past in order for our families to progress, though, we should “look to the future and see what lies in store.”

Be United as a Stake

“Be united as one, in faith, as a stake. Pray for your new leaders. They will need your prayers,” Elder Nelson told all of the members. “Believe in the words of Jesus Christ” that implore the Saints to take His yoke upon them that He may give them rest. “He will help you as you pay your tithing with a quiet heart [and] as you keep the Word of Wisdom.”

In a meeting with the young single adults, he told them that they did not need an Apostle to teach them, because they were now part of a stake and had all that was necessary in order to take them where they needed to go in the gospel. “Trust in your leaders,” he said.

In parting, Elder Nelson left an apostolic blessing of faith, health, and strength for the members to stand up for what is right and true.