Make wise decisions. Seek the companionship of the Holy Ghost. Avoid unrighteous pride. These were among the words of counsel the First Presidency delivered at general conference. 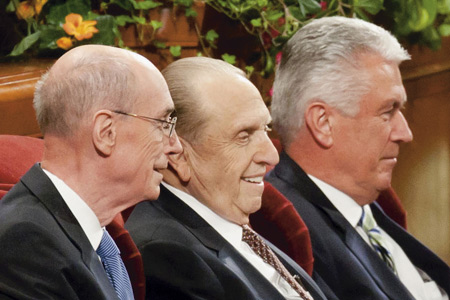 The President of The Church of Jesus Christ of Latter-day Saints and his two counselors, sustained by millions worldwide as prophets and apostles, addressed a variety of gospel-oriented subjects during the 180th semiannual general conference of the Church at the Conference Center in Salt Lake City on October 2–3.

To watch, listen to, or read messages from the prophets and apostles, visit the General Conference page.

President Henry B. Eyring, First Counselor in the First Presidency, spoke of the blessings that come from seeking the constant companionship of the Holy Ghost and of the need to trust God and then go and do what He requires.

And President Dieter F. Uchtdorf, Second Counselor in the First Presidency, reminded conference listeners that strength comes from paying attention to the basics of the restored gospel. He called upon priesthood holders to avoid unrighteous pride and to do their part in preparing the world for the coming of Jesus Christ.

“Each [temple] is a blessing in the lives of members and is an influence for good upon those not of our faith,” President Monson said in his opening remarks. He noted that “the ordinances performed in our temples are vital to our salvation and to the salvation of our deceased loved ones.”

He announced plans to build five new temples in Hartford, Connecticut, USA; Indianapolis, Indiana, USA; Lisbon, Portugal; Tijuana, Mexico; and Urdaneta, Philippines. This will bring the number of temples announced or under construction to 23 and, once completed, will bring the Church’s worldwide total to 157.

President Monson also called for missionary service, particularly from young men who have a priesthood responsibility to serve, but also from young women and mature couples. “I repeat what prophets have long taught,” he said, “that every worthy, able young man should prepare to serve a mission. Missionary service is a priesthood duty—an obligation the Lord expects of us who have been given so very much.”

During his remarks to priesthood holders President Monson spoke about making righteous choices. “My beloved brethren,” he said. “may we be filled with gratitude for the right of choice, accept the responsibility of choice, and ever be conscious of the results of choice. As bearers of the priesthood, all of us united as one can qualify for the guiding influence of our Heavenly Father as we choose carefully and correctly.”

In an address on Sunday morning, he spoke of the need to be grateful. “We can lift ourselves and others as well when we refuse to remain in the realm of negative thought and cultivate within our hearts an attitude of gratitude.”

In his closing comments, he said, “Endure to the end we must, for our goal is eternal life in the presence of our Father in Heaven. He loves us and wants nothing more than for us to succeed in this goal. He will help us and bless us as we call upon Him in our prayers, as we study His words, and as we obey His commandments.”

A week earlier, in addressing a general meeting of the Relief Society, the Church’s organization for women, President Monson spoke in favor of charity. “Rather than being judgmental and critical of each other, may we have the pure love of Christ for our fellow travelers in this journey through life,” he said.

President Eyring stressed the need of serving with the Spirit. “Let us do whatever is required to qualify for the Holy Ghost as our companion, and then let us go forward fearlessly so that we will be given the powers to do whatever the Lord calls us to do.”

President Uchtdorf issued a reminder that “strength comes not from frantic activity but from being settled on a firm foundation of truth and light. It comes from placing our attention and efforts on the basics of the restored gospel of Jesus Christ. It comes from paying attention to the divine things that matter most.”

The First Presidency, along with the Quorum of the Twelve Apostles who serve under their direction, are sustained by millions of Latter-day Saints worldwide as prophets, seers, and revelators who receive inspiration from God to direct the affairs of His Church today. Their messages are intended not only for members of the Church but for all of Heavenly Father’s children throughout the world.