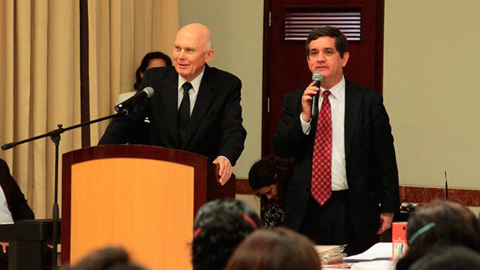 The scriptures can be like a personal Urim and Thumim when seeking for divine guidance, Elder Dallin H. Oaks of the Quorum of the Twelve Apostles told youth in Lima, Peru, while he was in the area for a series of meetings with members, leaders, and missionaries. He also encouraged youth to be alert when they read their scriptures, rather than reading at times when they are tired. That way they will be attentive and more capable of understanding and feeling the Spirit.

Elder Oaks said that the Book of Mormon has not changed, because eternal truths do not change. But youth can change, because they can become better if they have a willing heart. 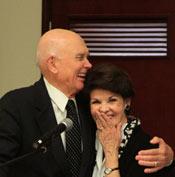 Sharing examples from his own marriage, Elder Oaks demonstrated the importance of properly preparing for marriage, and of husbands and wives continuing to dedicate time to each other after marriage. Noting that the average age of those entering into marriage is rising, and the number of children being born is decreasing, he encouraged youth to trust in the Lord and move forward with faith. In a meeting with young single adults, Elder Oaks shared the same message, adding that lack of money or having few material possessions should not prevent young adults from getting married. Elder Oaks also warned the young adults of Satan’s plan to stop the progress of members of the Church. He referred to the adversary as an enemy who tries to undermine human freedom by getting us to misuse agency.

Comparing the gospel of Jesus Christ to a pearl inside a box, Elder Oaks instructed more than 100 priesthood leaders in Arequipa, Peru, to concentrate their teaching on the pearl, instead of the “box,” which he likened to things like programs and temporal needs such as maintenance of buildings. 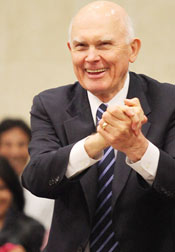 Elder Oaks buoys up the saints with his enthusiasm during an assignment to Peru in August.

A Testimony Is Important

Elder Oaks emphasized the importance of having a testimony of the Redeemer and reminded priesthood leaders that because they have been called and ordained by those in authority, they have a solemn and loving responsibility to testify of the doctrine and teachings of Jesus Christ and the prophets.

At the Manuel Prado Stake conference, more than 2,100 members and their friends gathered to hear the words of an apostle. Elder Oaks reminded them of the many ways Heavenly Father blesses his children. He encouraged them to follow the Savior’s example of how to live. Speaking of an experience in his own childhood, Elder Oaks told how he learned the value of tithing in the years following the death of his father. “We pay our tithing because we are poor and cannot get along without the blessings promised to tithe-payers,” Elder Oaks quoted his mother. He said that assurance was burned into his heart and has been an inspiration throughout his life.