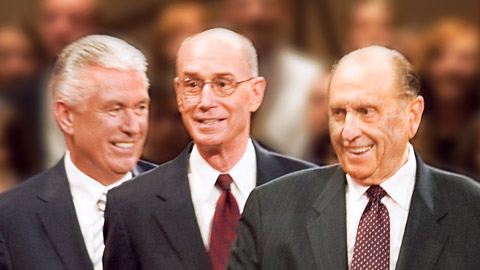 President Dieter F. Uchtdorf, President Henry B. Eyring, and President Thomas S. Monson encourage everyone to join together during general conference to feel the Spirit and receive instruction.

Why is it important to participate in general conference? The First Presidency, sustained as prophets and apostles, have repeatedly given reasons why it is important to attend, listen to, or watch the broadcasts of all general conference sessions and then, following conference, to review the messages during the ensuing months and live according to the inspiration received.

Why Does Conference Matter?

President Thomas S. Monson says the purpose of conference is to be instructed and inspired. We should join in the conference because “we are anxious to listen to the messages which will be presented to us,” he says, noting that “many messages, covering a variety of gospel topics, will be given,” that “those men and women who will speak to you have sought heaven’s help concerning the messages they will give,” and that “they have been impressed concerning that which they will share with us.”

President Henry B. Eyring, First Counselor in the First Presidency, offers similar counsel: “I know the servants of God who will speak to you during . . . conference. They are called of God to give messages to His children. The Lord has said of them: “What I the Lord have spoken, I have spoken, and I excuse not myself; and though the heavens and the earth pass away, my word shall not pass away, but shall all be fulfilled, whether by mine own voice or by the voice of my servants, it is the same.”

President Dieter F. Uchtdorf, Second Counselor in the First Presidency, explains why we should pay close attention to the messages of conference. “The more we treasure the words of the prophets and apply them, the better we will recognize when we are drifting off course—even if only by a matter of a few degrees.”

A Message for Me?

As we participate in general conference, President Eyring says we “might pray and ponder, asking the question: Did God send a message that was just for me?”

We also need to exercise faith in God in order for us to learn from the messages and receive inspiration, President Eyring teaches. “You show your trust in Him when you listen with the intent to learn and repent and then you go and do whatever He asks. If you trust God enough to listen for His message in every sermon, song, and prayer in this conference, you will find it.”

We can continue to find those messages even after conference ends, says President Monson. “I urge you to study the messages and to ponder their teachings and then to apply them in your life. . . . They are deserving of our careful study.”

“May we long remember that which we have heard during conference,” President Monson says.

Conferences have been a part of the Church since the early days of the Restoration, and many references are made to them in the Doctrine and Covenants. One particular example is in section 124, where various instructions concerning priesthood assignments are given by revelation, and then this admonition is also given: “Await patiently and diligently for further instructions at my general conference, saith the Lord” (verse 88).

Similar counsel is given in Doctrine and Covenants 26:1, to study the scriptures and perform labors based on inspiration “until . . . the next conference; and then it shall be made known what you shall do.”

This is great counsel for us all—based on scripture study, counsel from the previous general conference, direction from local leaders, and inspiration, we should do all the good we can, anticipating further instructions at general conference.

Gather Together To Be Instructed

Ancient Israel often received counsel and guidance as a group. “Gather the whole assembly of the children of Israel together,” the Lord says in Numbers 8:9, and in Joshua 24:1 we learn that the prophet “gathered all the tribes of Israel to Shechem, and called for the elders of Israel, and for their [leaders], and for their judges, and for their officers; and they presented themselves before God.”

Moses set a pattern still followed by prophets today, when he “gathered all the congregation of the children of Israel together, and said unto them, These are the words with the Lord hath commanded, that ye should do them” (Exodus 35:1).

In New Testament times, Christ’s followers gathered to receive counsel and instruction. The Savior often spoke to multitudes, including when he fed the 5,000 (see Mark 6:44, John 6:10) and the 4,000 (see Matthew 15:38 , Mark 8:9). Luke records that about 5,000 believed the words spoken by Peter and John (see Acts 4:4), and Paul records in 1 Corinthians 15:6 that following His resurrection, Christ was “seen of above five hundred brethren at once.”

The Book of Mormon describes Christ’s appearance to the people in the Americas following His ministry in the Holy Land, indicating that “the multitude did see and hear and bear record, and they were in number about two thousand and five hundred souls; and they did consist of men, women, and children” (3 Nephi 17:25).