At home in a hidden-away corner, I have a small black walking stick with an imitation silver handle. It once belonged to a distant relative. Why do I keep it for a period now spanning more than 70 years? There is a special reason.

You see, as a very small boy I participated in a Christmas pageant in our ward. I was privileged to be one of the three wise men. With a bandanna about my head, Mother’s Chickering piano bench cover draped over my shoulder, and the black cane in my hand, I spoke my assigned lines: 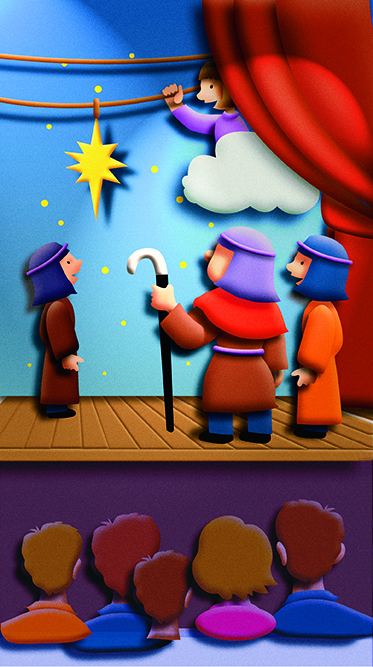 “Where is he that is born King of the Jews? for we have seen his star in the east, and are come to worship him” (Matt. 2:2).

I don’t recall all of the words in that pageant, but I vividly remember the feelings of my heart as the three of us “wise men” looked upward and saw the star, journeyed across the stage, found Mary with the young child Jesus, then fell down and worshipped Him and opened our treasures and presented gifts: gold, frankincense, and myrrh.

I especially liked the fact that we did not return to the evil Herod to betray the baby Jesus, but obeyed God and departed another way.

The years have flown by, the events of a busy life take their proper places in the hallowed halls of memory, but the Christmas cane continues to occupy its special place in my home; and in my heart is a commitment to Christ (from “Feelings of Heart Recalled,” Church News, Dec. 12, 2009, 7, reprinted as “The Christmas Cane,” Dec. 2010 Friend.)

One ever remembers that Christmas day when giving replaced getting. In my life, this took place in my tenth year. As Christmas approached, I yearned as only a boy can yearn for an electric train. My desire was not to receive the economical and everywhere-to-be-found windup model train; rather, I wanted one that operated through the miracle of electricity. The times were those of economic depression; yet Mother and Dad, through some sacrifice I am sure, presented to me on Christmas morning a beautiful electric train. 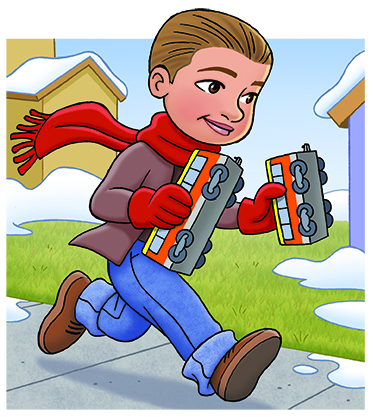 For hours I operated the transformer, watching the engine first pull its cars forward, then push them backward around the track. Mother entered the living room and said to me that she had purchased a windup train for Mrs. Hansen’s son, Mark, who lived down the lane. I asked if I could see the train. The engine was short and blocky, not long and sleek like the expensive model I had received. However, I did take notice of an oil tanker car that was part of his inexpensive set. My train had no such car, and pangs of envy began to be felt. I put up such a fuss that Mother succumbed to my pleadings and handed me the oil tanker car. She said, “If you need it more than Mark, you take it.” I put it with my train set and felt pleased with the result.

Mother and I took the remaining cars and the engine down to Mark Hansen. The young boy was a year or two older than I. He had never anticipated such a gift and was thrilled beyond words. He wound the key in his engine, it not being electric like mine, and was overjoyed as the engine and two cars, plus a caboose, went around the track.

Then Mother wisely asked, “What do you think of Mark’s train, Tommy?”

I felt a keen sense of guilt and became very much aware of my selfishness. I said to Mother, “Wait just a moment. I’ll be right back.”

As swiftly as my legs could carry me, I ran home, picked up the oil tanker car plus an additional car from my train set, and ran back down the lane to the Hansen home, joyfully saying to Mark, “We forgot to bring two cars that belong to your train.” Mark coupled the two extra cars to his set. I watched the engine make its labored way around the track and felt supreme joy, difficult to describe and impossible to forget. The spirit of Christmas had filled my very soul.

That experience made it somewhat easier for me to make a difficult decision just one year later. Again Christmastime had come. We were preparing for the oven a gigantic turkey and anticipating the savory feast that awaited. A neighborhood pal of mine asked a startling question: “What does turkey taste like?”

It was then that I realized my friend had never eaten chicken or turkey. I asked what his family was going to have for Christmas dinner. There was no prompt response, just a downcast glance and the comment, “I dunno. There’s nothing in the house.”

I pondered a solution. There was none. I had no turkeys, no chickens, no money. Then I remembered I did have two pet rabbits. Immediately I took them to my friend and handed the box to him with the comment, “Here, take these two rabbits. They’re good to eat—just like chicken.”

He took the box, climbed the fence, and headed for home—a Christmas dinner safely assured. Tears came easily to me as I closed the door to the empty rabbit hutch. But I was not sad. A warmth, a feeling of indescribable joy, filled my heart. It was a memorable Christmas (“Christmas Gifts, Christmas Blessings,” Dec. 1995 Liahona).

More Christmas Memories from the Brethren