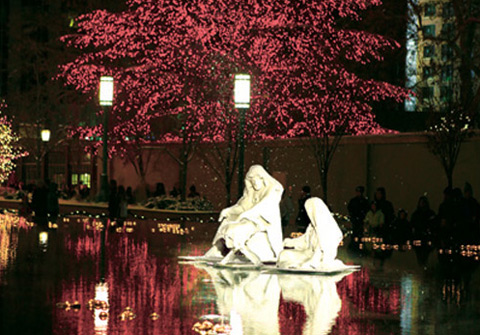 The Pageant and the Cane

At home in a hidden-away corner, I have a small black walking stick with an imitation silver handle. It once belonged to a distant relative. Why do I keep it for a period now spanning more than 70 years? There is a special reason.

You see, as a very small boy I participated in a Christmas pageant in our ward. I was privileged to be one of the three Wise Men. With a bandana around my head, Mother’s piano bench cover draped over my shoulder, and the black cane in my hand, I spoke my assigned lines:

“Where is he that is born King of the Jews? for we have seen his star in the east, and are come to worship him” (Matthew 2:2).

I don’t recall all of the words in that pageant, but I vividly remember the feelings of my heart as the three of us “Wise Men” looked upward and saw the star, journeyed across the stage, found Mary with the young child Jesus, then fell down and worshipped Him and opened our treasures and presented gifts: gold, frankincense, and myrrh.

I especially liked the fact that we did not return to the evil Herod to betray the baby Jesus, but obeyed God and departed another way.

The years have flown by, the events of a busy life take their proper places in the hallowed halls of memory, but the Christmas cane continues to occupy its special place in my home; and in my heart is a commitment to Christ.

(Taken from an article in the December 2010 Friend.)

There was a song I heard first when I was a little boy—a song about Christmas and home. Those were days of war when many people were away from their homes and family—a dark time for those who feared that they might not be reunited with loved ones in this life. I remember my feelings for home and family when I walked by one house on the way to school at Christmastime and saw a little flag with a gold star on it hung in the window. It was the home of a girl I knew in school. Her brother, not much older than I, had been killed in the war. I knew his parents and felt some of what they did. On the way home after school, I would feel grateful anticipation for the glad welcome I knew awaited me.

When I turned on the radio in our living room during the Christmas season, I would hear words and music that still echo in my mind. A few lines of that song touched my heart with a yearning to be with family. I was living with my parents and my brothers in a happy home, so I knew somehow that the yearning I felt was for more than to be in a house or in the family life I then enjoyed. It was about some future place and life, even better than I knew or had yet imagined.

The line of the song that I remember best is “I’ll be home for Christmas / If only in my dreams.” The house in which I decorated Christmas trees with my mother and father in those happy days of my childhood still stands, largely unchanged. A few years ago I went back and knocked on the door. Strangers answered. They allowed me to step into the rooms where the radio had been and where our family had gathered around the Christmas tree.

I realized then that the desire of my heart was not about being in a house. It was about being with my family, and it was a desire to feel enveloped in the love and the Light of Christ, even more than our little family had felt in the home of my childhood.

We can with confidence set a goal to make this Christmas brighter than the last and each year that follows brighter still. The trials of mortality may increase in intensity, yet for us, darkness need not increase if we focus our eyes more singly on the light that streams down on us as we follow the Master. He will lead us and help us along the path that leads upward to the home for which we yearn.

I testify that because of Him, you may have an assurance that you can go home not only at Christmastime but also to live forever with a family whom you love and who love each other.

(Taken from an article in the December 2009 Liahona.)

Sunshine in an Orphanage

Many years ago I found myself as part of occupation troops in a foreign land just at the end of a terrible war. It was not long after we arrived in this country before we developed a great love and concern for the people we were there to watch over. This was especially true of the young people, the children. Many times we would find them scavenging in our garbage cans looking for food to keep themselves alive. This deeply touched us, and we wanted to make a more substantial contribution to them. We raised what money we could and found a local religious group that was willing to open an orphanage for them. We donated as much time as possible to improve the facilities and provided them with the operating funds they needed.

As Christmas approached, we sent letters home to our families asking that, instead of sending gifts to us, they send toys for the children in the orphanage. The response of our families was overwhelming! Toys arrived daily from our homes.

We found a tree suitable to use as a Christmas tree, but we had no traditional decorations for it. A lady taught us how to make little birds by folding square pieces of paper, and these became the major part of the decorations for the tree. The presents were wrapped mostly in discarded Stars and Stripes newspapers. I’ll never forget Christmas Eve with those children. I am sure many of them had never seen a Christmas tree in their lives.

We sang Christmas carols to them, but we weren’t very good at this. They had been rehearsing for weeks so they could sing a song to us in English. It was not a Christmas carol, but it was beautiful. They sang “You Are My Sunshine.” We were deeply touched with the spirit of the children that Christmas Eve, especially as they opened the presents sent from our families. I suppose some of them had not had a toy in many, many years.

This is a Christmas I’ll never forget because we were learning the true meaning of this great holiday season. The greatest joy we can receive in life is giving—to bring into the life of someone else a little joy and happiness.

I recall an experience that shows the effect of my mother’s teachings. Just before Christmas one year, our bishop asked me, as a deacon, to help him deliver Christmas baskets to the widows of the ward. I carried a basket to each door with his greetings. When he drove me home, there was one basket remaining. He handed it to me and said it was for my mother. As he drove away, I stood in the falling snow wondering why there was a basket for my mother. She never referred to herself as a widow, and it had never occurred to me that she was. To a 12-year-old boy, she wasn’t a widow. She had a husband, and we had a father. He was just away for a while.

I anticipate that glorious future day when the separated will be reunited and all of us will be made complete as the Lord has promised. I testify of Jesus Christ, the Only Begotten Son of the Eternal Father, whose priesthood authority and whose Atonement and Resurrection make it all possible, in the name of Jesus Christ, amen.

One of my fondest memories as a small boy was the annual visit to our home on Butler Avenue in Salt Lake City of my Grandfather and Grandmother Ballard on Christmas morning. Melvin J. Ballard died when I was ten years old. I knew that my Grandfather Ballard was a very important man in the Church, but I did not understand what it meant to be an Apostle of the Lord Jesus Christ. To me he was Grandpa Ballard, and that was enough to make me always very eager for his visit to our home, and especially on Christmas morning.

I particularly remember one Christmas morning, just a year or two before Grandfather Ballard died. My father and mother gave to Grandfather and Grandmother a new set of luggage. This seemed so appropriate to me then, because it seemed like Grandfather was always traveling.

Reflecting back on those special Christmas mornings with Grandfather and Grandmother Ballard brings special fond memories since today I find myself as a member of the Council of the Twelve and I have a new and deeper appreciation for those special Christmas mornings with my grandparents. I hope now as my grandchildren come to visit me and I go to visit them, I can create memories for them that will live on long after I am gone.

Better Than a Bicycle

It has been more than 50 years, but I vividly remember Christmas morning 1959. With childish anticipation, I hoped desperately for a new bicycle. My older brother and sister and I shared the same bicycle, a 24-inch (61 cm) antique we had each used to learn to ride. It had long been less than stylish, and I had appealed to my parents for a new bicycle. Looking back, I am a little embarrassed that I did not have more sensitivity to the cost of such a present to a family with limited income.

Christmas morning came, and I leaped up the stairs from our basement bedroom. Running into the living room, I looked in vain for a bicycle. My heart dropped as I noticed a small present under my stocking, and I tried to control my disappointment.

As we sat as a family in the living room, my father asked me to get a knife from the adjoining kitchen so we could open a box holding a present for my brother. I walked into the small kitchen and fumbled for the light switch to find my way. As the light illuminated the room, my excitement soared. Right before me stood a beautiful black 26-inch (66 cm) bicycle! For many years I rode that bicycle, took care of it, watched over it, and befriended it—a gift long appreciated and treasured.

(Taken from an article in the December 2010 Liahona.)