Broadcast Focuses on Priesthood and Families

Prophets and apostles taught Church leaders about priesthood, family, and related gospel doctrines and principles during the annual worldwide leadership training broadcast on February 11, 2012. Elder Dallin H. Oaks of the Quorum of the Twelve Apostles conducted the meeting.

Elder Christofferson (left) and Elder Perry (right) provide answers to questions about how members can be more effective in using gospel principles to bless their lives and the lives of others.

Elder L. Tom Perry and Elder D. Todd Christofferson of the Quorum of the Twelve Apostles began the broadcast by discussing how the restored gospel of Jesus Christ provides the answers to all of life’s problems and challenges and how we can be more effective in making its principles and covenants bless our lives and the lives of others. They discussed such questions as:

Watch, listen and read the messages from the Worldwide Training broadcast.

Homes Must Be Holy

The next portion of the broadcast included messages from Elder Russell M. Nelson and President Boyd K. Packer of the Quorum of the Twelve Apostles, who spoke about the doctrine that provides the reason for what we do in the Church and in our individual lives, particularly marriage, children, family, and the importance of priesthood power in the home. 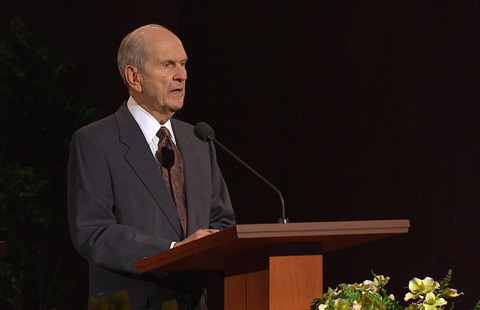 Elder Nelson reminds married priesthood bearers of their highest duty to care for their wives.

Elder Nelson told leaders: “We are raising our children in enemy-occupied territory. The homes of our members must become the primary sanctuaries of our faith, where each can be safe from the sins of the world. Our Master depends upon us to live according to His truth. Please teach our members that marriage is ordained of God. It is doctrinally based and eternally significant.

“Remind each married bearer of the priesthood that his highest duty is to care for his wife. She enables him to qualify for his greatest blessings. And when the children leave the nest, a husband and his wife will have each other in what can be a wonderful and exciting phase of life together.”

The Most Important Service 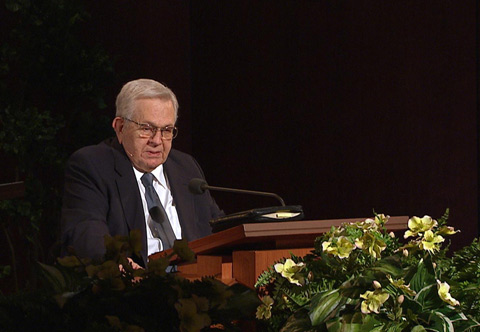 President Packer reminds priesthood holders that the most important service they can provide is within their own homes.

President Packer spoke of the roles and responsibilities of priesthood holders in the Church by saying, “As a holder of the priesthood, we respond to every call that comes to perform every service that will come, the most important of which is within the walls of our home. The last few Presidents of the Church, conscious of what the adversary was doing, have centered their teaching, their preaching, on the home and the family. … 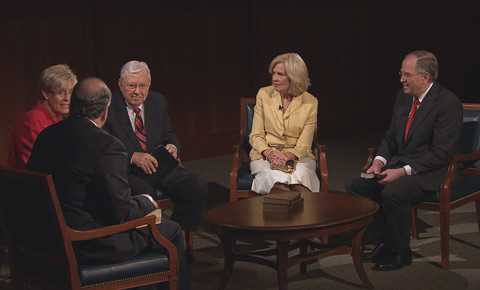 (Left to right) Elder Rasband, Sister Wixom, Elder Ballard, Sister Dalton, and Elder Andersen discuss how members of the Church can be strengthened within their homes and callings.

Elder M. Russell Ballard of the Quorum of the Twelve Apostles then lead a panel discussion on how the Church can assist in the ongoing conversion and well-being of its members, including strengthening priesthood quorums and other directions from chapters 3 and 4 of Handbook 2. Panel participants included Elder Ballard; Elder Neil L. Andersen of the Quorum of the Twelve Apostles; Elder Ronald A. Rasband, Senior President of the Seventy; Sister Elaine S. Dalton, general president of the Young Women; and Sister Rosemary M. Wixom, general president of the Primary.

“We know that Church members are facing real challenges in these difficult days. And Church growth occurs when personal, lifelong conversion to the gospel results in increased faithfulness of each individual and family. This is a constant effort and it is a blessing that comes when we are able to save and help one another, particularly one by one,” Elder Ballard said.

In response to a video segment on activation, Elder Andersen said, “I’ve heard (President Monson) teach us many, many times that one of the greatest feelings in life is knowing that the Lord has sent you to answer another person’s prayer. And you know how many people in the world we live in today are praying for solutions, praying for hope, and they might not even know that they’re seeking the Church or to return.”

Following a video segment titled, “Dayton’s Legs” Sister Rosemary M. Wixom commented, “…future leaders are in Primary. And when Spencer (from the video) said, “I found out I could do a hard thing,” I thought, that’s exactly what our youth today need to know and feel inside, in their bones, that they can do a hard thing and stand alone, if necessary, like President Monson said at conference.”

Commenting on the same video segment, Sister Dalton said, “This is the Lord’s work …It’s done one by one, and we have such a great example in our prophet. He leads the way and he does minister one on one. And so I don’t think that leaders should be overwhelmed. There are so many who need help, but what I felt and saw today was that we zeroed in. These leaders zeroed in on one person that they could help. And if everyone could just do that, everything would change. Families would be different; individuals would be different. I want to be like our prophet because he is like the Savior.”

Elder Ballard concluded the panel by saying, “Just think what would happen if every elders quorum was able to bring just one or two a year. I’m talking about each presidency working together to get that done. It’s not that hard when we bring it down, looking at the effort of reaching out to our Heavenly Father’s children that He loves and whom we have the responsibility for because we have the fulness of the everlasting gospel of Jesus Christ.”

Focus on the “Why” 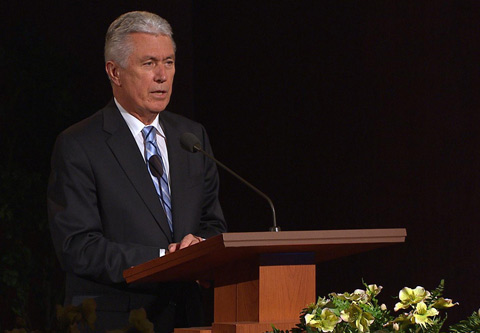 President Uchtdorf reminds Church leaders to keep the gospel simple by focusing on the “why” of the gospel.

President Dieter F. Uchtdorf, Second Counselor in the First Presidency, concluded the training by warning Church leaders that “too often, we complicate the beauty and simplicity of the gospel of Jesus Christ with endless lists of meticulous expectations. However, when we focus on the ‘why’ of the gospel, much of the confusion fades away. … The proper ‘why’ questions will lead us to the proper ‘who,’ ‘what,’ ‘when,’ ‘where,’ and ‘how’ decisions.”

He discussed how councils can effectively work together to consider instructions they have been given, determine a few specific actions to implement, and follow up on those commitments. “We know that you desire to heed the whisperings of the Spirit, to follow the Savior, and to be His hands in this great work,” President Uchtdorf said.