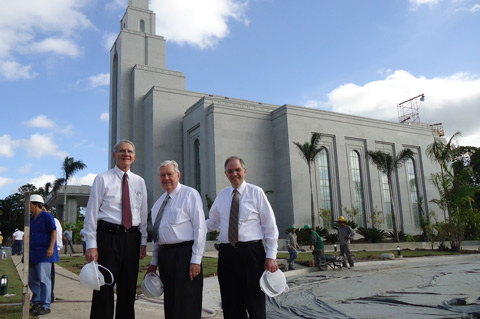 Elder Jay E. Jensen of the Presidency of the Seventy (left), Elder M. Russell Ballard (center), and Elder Neil L. Andersen (right) of the Quorum of the Twelve Apostles, visit the temple that is under construction in Manaus, Brazil.

Brazil is a nation on the rise, growing in economic and political pre-eminence in South America and in the world as it prepares to host international events such as the 2014 World Cup of futebol (soccer) and the 2016 Summer Olympics.

It is also a nation where the Church is on the rise. With more than a million Latter-day Saints, five temples, 242 stakes, and 27 missions, it is the country with the third-largest Church population in the world, after the United States and Mexico. And with more than 35,000 converts joining each year, the Church in Brazil is growing stronger and stronger.

When Elder M. Russell Ballard and Elder Neil L. Andersen of the Quorum of the Twelve Apostles visited Brazil recently, Elder Ballard said he was deeply impressed by the strength of the nation, the strength of the Church, and the faithfulness of the members. In a meeting with young adults, he recalled a statement made by his grandfather, Elder Melvin J. Ballard (1873-1939), who served as a member of the Quorum of the Twelve Apostles for 20 years.

In 1925, his grandfather was assigned to begin the work in South America. Just prior to returning home in 1926, he was speaking to a small group of Church members in Buenos Aires, Argentina. He gave a prophetic view of the future Church in South America, saying that “thousands will join here. … [South America] will become a power in the Church.”

“Since then, the entire continent has become a dynamic power in the Church,” Elder M. Russell Ballard said, “and Brazil is prominent among the nations of South America.”

Throughout the visit, from January 20-29, he and Elder Andersen, along with Elder Jay E. Jensen of the Presidency of the Seventy, met with and instructed families, priesthood leaders, temple workers, missionaries, and youth in Ribeirão Preto, São Paulo, Sorocaba, Campinas, Curitiba, Recife, Natal, and Jundiaí.

They held more than two dozen meetings, including six stake conferences, ten missionary meetings, nine devotionals with young single adults, and visits to five temples, including the temple under construction in Manaus. They also visited with 86-year-old Elder Helio Da Rocha Camargo, who was called as the first General Authority from Brazil. He served as a Seventy from 1985 to 1990.

The Brazil Area Presidency—Elder Claudio R. M. Costa, Elder Carlos A. Godoy, and Elder Jairo Mazzagardi of the Seventy, who are all from Brazil—participated in the meetings, as did a number of Area Seventies from Brazil.

In the various meetings, Elder Ballard counseled members to make time in their lives for Christ and to become a “believing people.” It is vital, he said, that members follow the Savior’s admonition to Thomas to “be not faithless, but believing” (John 20:27). He said they will be blessed if they follow the examples of the Prophet Joseph Smith and his parents, Joseph Smith Sr. and Lucy Mack Smith, who enlisted faith and prayer to become “believing people.” He also challenged all members to help an inactive friend to return to full activity.

Elder Ballard also cautioned that technology must be used wisely. “Quit texting and start talking,” he said. “Put aside your video games. Be still once in a while, and connect with heaven.” He urged youth and adults to stay away from pornography in all its forms, explaining that spiritual strength and power come from complete righteousness and virtue.

He taught those who hold the priesthood to care for those around them one by one. “It’s a universal principle,” he said. “The work is done one by one.”

Elder Andersen reminded members that “our choices are not between richness and poverty or between fame and obscurity. Our choice is between good and evil.”

Inspired by Devotion and Faith

Following the visit, Elder Andersen said that he, Elder Ballard, and Elder Jensen were inspired by the devotion and faith they found among the Latter-day Saints of Brazil. He said the members were pleased to see Elder Ballard in their country once again. “It’s been more than 10 years since he’s been in Brazil,” Elder Andersen said, “and the people here love him dearly.” He also noted that when Elder Ballard’s wife, Barbara, spoke to the people, she “shared a sweet testimony of the Ballards’ life together.”

Elder Ballard noted that Elder Andersen has given many years of service in Brazil, where, as a Seventy prior to his calling as an Apostle, he presided over the Brazil South Area. “He has witnessed many sacred moments in his service to this country and has many Brazilian friends,” Elder Ballard said. “His ministry was evident everywhere we went, and the outpouring of love for him and his wife, Kathy, was significant.” He also thanked Elder Jensen for his many dedicated years of service in Latin America.

A Bright Future for Brazil

“Brazilians are strong members of the Church,” Elder Andersen said. “They love the Lord and they love to serve, and they will serve not only in Brazil but, as opportunities arise, in other places as well. Church members will continue to have an impact at all levels, both in the Church and in the community,” he said.

“As a nation, Brazil is experiencing a period of dramatic growth, influence, and opportunity,” Elder Ballard said. “Members of the Church in Brazil will keep pace with that, and many of them will become leaders in industry, education, and politics.

“The Church is maturing here, and I was impressed with what the Brazilian members are accomplishing both temporally and spiritually,” he said. “I was particularly pleased to see how many young people continue to accept missionary calls and how many marry in the temple. They are the bright future of the Church. They will continue to build the Church in this marvelous country.”