Best Way to Rescue Is to Strengthen Faith in Christ

Urging priesthood leaders to rescue those who have drifted away from activity in the Church, Elder Dallin H. Oaks of the Quorum of the Twelve Apostles said that “if we can only strengthen our members’ faith in Jesus Christ, we will redeem them and strengthen them more than in any other way.”

He said, “There is nothing that any one individual could do that would greater encourage attendance and activity and service and the keeping of covenants, and so on, than an increase of faith.”

Elder Oaks offered this counsel during a multistake priesthood leadership conference held in Bellevue, Washington, a suburb of Seattle, on November 19, 2011. 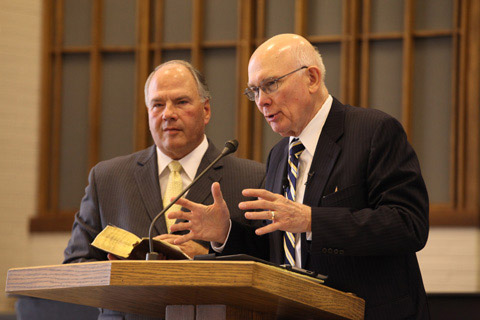 Elder Ronald A. Rasband, Senior President of the Seventy (left), and Elder Oaks respond to questions from local leaders

“Too many of our members have lost sight of the essentials of the gospel of Jesus Christ and have spiritual apathy,” Elder Oaks told the leaders.  “You know this better than I.” He quoted President Gordon B. Hinckley (1910–2008, 15th President of the Church), who said, “If I were a bishop or a stake president today, what would I do? I think that I would put my major efforts on building the spirituality of the people.” Elder Oaks said, “That is another way of saying what I am trying to say.” 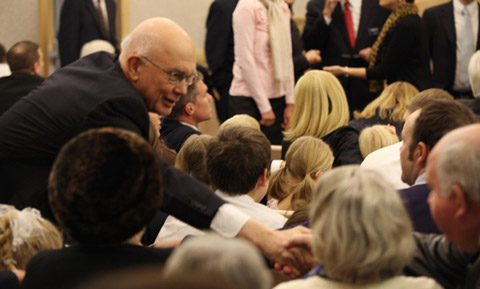 Before speaking at stake conference, Elder Oaks says hello to a member

“I think involving someone in service is a way to help get them back into fellowship in the Church,” Elder Oaks said. “Some people will come out and serve when they won’t come out to hear a sermon. But finally, the retaining strength is to reconnect them to our Savior and to increase their faith.”

He told leaders that it is important to help those who partake of the sacrament and renew their covenants to understand the importance of what they are doing. That is particularly important, he said, for the rising generation. For example, he said, if the deacons who pass the sacrament can say of themselves, “ ‘I am officiating in an ordinance of the gospel so important the Lord has commanded that it be done again and again and again and again throughout the life of members,’ … that, I think, is going to change a deacon’s perception of what he is doing.” He said the same thing needs to happen for teachers and priests in their respective roles.

He encouraged bishops to ensure sacrament meetings and other meetings, as well as all Church activities, will spiritually strengthen the members. “I just encourage you to think about anything you do in a programmatic way, or in decisions that you make, in your welfare capacity and so on—think about how all of this is going to relate to building faith in the Lord Jesus Christ,” he said. He told leaders to stress to teachers that “giving a lesson is not enough—teaching a person is what we’re aiming at. We focus on the effect on the individual.  And whatever the lesson, its ultimate objective is to build faith in the Lord Jesus Christ.

Only One Can Save

“The most important thing that I can [share with] you today,” Elder Oaks said, “is a testimony of Jesus Christ.” He quoted King Benjamin in the Book of Mormon, who said, “And moreover, I say unto you, that there shall be no other name given nor any other way nor means whereby salvation can come unto the children of men, only in and through the name of Christ, the Lord Omnipotent” (Mosiah 3:17). 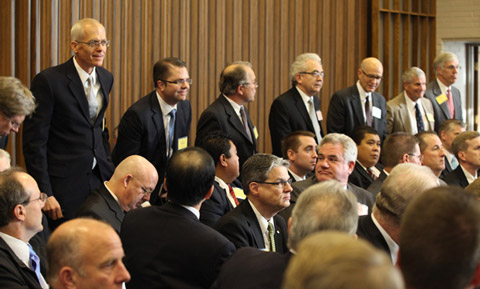 Local leaders from the Seattle, Washington, area introduce themselves during the priesthood leadership conference

In addition to his counsel about building faith in Christ, Elder Oaks discussed a number of other subjects and he and Elder Ronald A. Rasband, Senior President of the Seventy, responded to leaders’ questions. Elder Oaks said that priesthood leadership conferences are held to enable leaders to have more opportunities to meet directly with members of the Quorum of the Twelve Apostles, that such meetings always involve a number of stakes, and that following the meeting visiting authorities attend stake conference in the local unit that has gone the longest without a visit from an Apostle.

He spoke of the new handbook of instructions, saying one of the important changes was sharing the book with priesthood and auxiliary leaders, “so that everybody is on board.” He gave examples of how the handbook allows leaders the flexibility to deal with local circumstances throughout the world and how it encourages fathers to participate in priesthood ordinances. He reminded bishoprics that the ward council is a discussing body, not a decision body. He said that often the right answer during ward council is for the bishop to say, “I’m going to discuss this with my counselors and we’ll get back to you on that.” He said bishoprics should not deal with confidential matters during ward council.

Work on the Wiring

Elder Oaks quoted President Boyd K. Packer, President of the Quorum of the Twelve Apostles, as stating that with improved understanding of the role of the Seventy, the priesthood has now been “effectively wired” down to the level of the stake president, but we still need to work on the “wiring” to get fathers to use the priesthood in their homes. 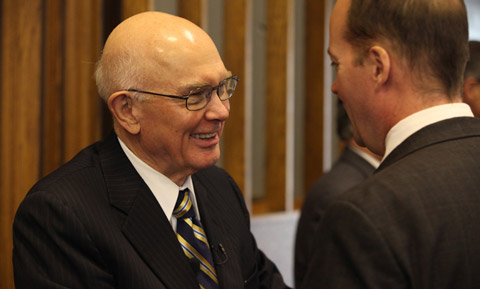 He said that as the Church receives greater public attention than ever before, members should not feel obligated to try to explain obscure matters from remote history. “Their answer should be, ‘We have a living prophet. Look at what our leaders are teaching us today.’ ” He also counseled Church members to turn unkind or misinformed comments into opportunities to focus on the real doctrine of the Church and on clearing up misperceptions.

Both Spiritual and Temporal

Elder Oaks counseled leaders and members to call upon the Lord, keeping in mind that there is nothing the Lord has not felt, and that His Atonement is not only to cleanse us from sin, but also to strengthen us to resist evil. He referred to Alma 7:11: “And he shall go forth, suffering pains and afflictions and temptations of every kind; and this that the word might be fulfilled which saith he will take upon him the pains and the sicknesses of his people.”

Real growth in the Church is measured best by how many members are endowed and how many men are ordained to the Melchizedek Priesthood. We must also look realistically at how many people local units can absorb, and help those who join the Church not to revert to old addictive habits. “If people don’t have problems in their life, they’re usually not teachable,” Elder Oaks said, “so we shouldn’t expect people coming into the Church to be free of problems.” He said we need to help them grow in the gospel, and we should have supportive networks to help them. He encouraged missionaries to stay in touch with those they teach, encouraging and supporting them in appropriate ways.

The Lord Supports His Servants

Elder Oaks also discussed how to obtain inspiration when deciding who should be called to a position in the Church. He said, “You’re the servant of the Lord, and your action is the Lord’s action. You study it out, and you [extend the call to] them, and then because you’re the Lord’s servant, they are [called] by the Lord, and they will get the witness [of the calling] because the Lord honors His servant.” 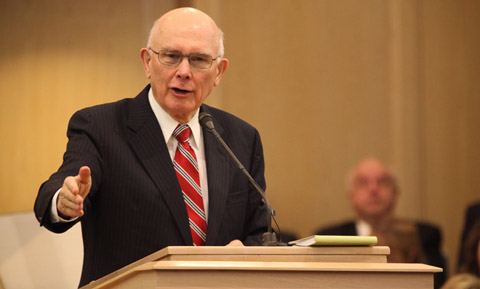 After all of the teaching, discussion, and responses to questions during the priesthood leadership conference, what many remembered most was Elder Oaks’s sincere testimony.

“As one of the witnesses of His name in all the world,” he said, “I testify to you of Jesus Christ. It is His priesthood you hold, and it is His work that you do. It is of Him that you testify, and it is to Him that you seek to bring the members of your ward or your branch and your stake. He is the Only Begotten Son of God the Eternal Father. We know Him to be our Savior. We know Him to be the Creator of the world, under the plan of the Father. We know Him to be Jehovah of the Old Testament, the Lord God of Israel. We know Him to be our Savior from death and from sin if we will repent and come unto Him with a broken heart and a contrite spirit, the sacrifice we are asked to make, which we memorialize in partaking of the sacrament. I testify of Jesus Christ as His servant, and I testify that you are His servants and that we are involved in His work in this, His Church.”