Be Swift Messengers, Examples of Unity 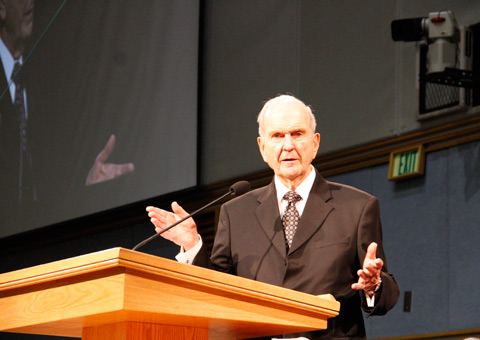 Elder Nelson speaks about the need to demonstrate and teach the principle of unity.

We should become “swift messengers” in order to share the gospel with the world, Elder Russell M. Nelson of the Quorum of the Twelve Apostles told missionaries at a devotional at the Missionary Training Center in Provo, Utah. New missionary training center presidents and their wives and new visitors’ center directors and their wives also attended the devotional.

Elder Jeffrey R. Holland of the Quorum of the Twelve Apostles, speaking during a seminar for the training center presidents and visitors’ center directors at the Joseph Smith Memorial Building in Salt Lake City, Utah, stressed that in missionary work we should demonstrate and teach the principle of unity, as exemplified by the Godhead.

Be an Ensign to the Nations

In unifying ourselves, Elder Nelson said, we can bring others to the knowledge of the truth. “Missionaries are the connecting link between God and millions of His children, most of whom populate the earth without the slightest knowledge of their identity and purpose. Missionaries invite these uninformed souls to come unto Christ.”

Elder Nelson urged missionaries to be an “ensign to the nations” and to never cease to assist in the gathering of Israel. Referring to the call to action in Isaiah 18, he said, “It's not a coincidence that we have [a statue of] a man with a trumpet on top of the temple. And you are the trumpeters. You're the swift messengers. Keep your running shoes on.”

“Think of that sometime when you are wondering where to go next,” Elder Nelson said. “You are the fishers the Lord raised up for this day and age. You are the hunters to find these people who are to be brought back to the Lord.”

In order to become swift messengers, he said, we must preach the doctrines of the Atonement, which allow for the purposes and prophecies of God to come to pass.

“Some 600 years before Jesus was born in Bethlehem, the prophets knew the Abrahamic covenant would be fulfilled ‘in the latter days,’” Elder Nelson says. “And we get to participate! Isn't that exciting? We get to participate in this fulfillment of prophecies made some 4,000 years ago.

“The hope in my heart is that you will each study the doctrine personally, especially as it relates to your own identity and focus as a missionary at this unique time in the history of the world.” 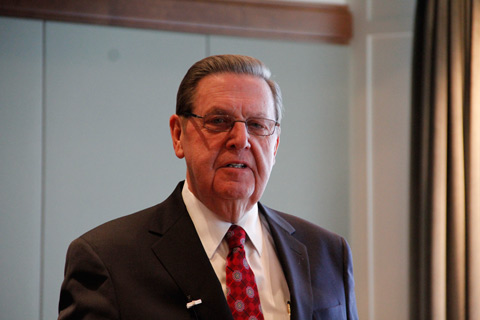 Elder Holland describes the Godhead as being one in spirit and in purpose.

Although the Father, the Son, and the Holy Ghost are three physically separate beings, “They are united—They are ‘one’—in every other conceivable way,” Elder Jeffrey R. Holland of the Quorum of the Twelve said. “The longer I study, and the more I learn, I find that there is much more that unites Them than separates Them.”

The doctrine of the Godhead is at the heart of the gospel, Elder Holland said, noting that we need to understand the nature of the Godhead in order to teach nonmembers this important doctrine.

Elder Holland referred to the intercessory prayer in John 17 to show how Christ pleaded with Heavenly Father to help us become one in spirit and purpose, even after the manner of the Godhead.

Be One as They Are One

“The great theme of that prayer is unity,” Elder Holland says. “We are to be one with our Father in Heaven and with Christ as They are one. Theirs is the ideal and is supposed to be the object of our efforts.”

Although we are to be united, we each have distinct roles to fulfill, Elder Holland says, which is why we must be in the world but not of it.  For example, “We have this great and powerful gift of the Holy Ghost that comes with baptism. No lesson can be more important for a missionary than to remember this personage of the Godhead with whom we can have a deeply personal relationship spiritually.”

We should exemplify the unity of the Godhead, says Elder Holland. “We worship the Father and Him only; we serve the Father in the name of the Son. … Christ came to do the will of the Father in all things.” Then, during mortality, the Holy Ghost guides us and fulfills His divine role.