Be an Active Participant, Not a Silent Observer 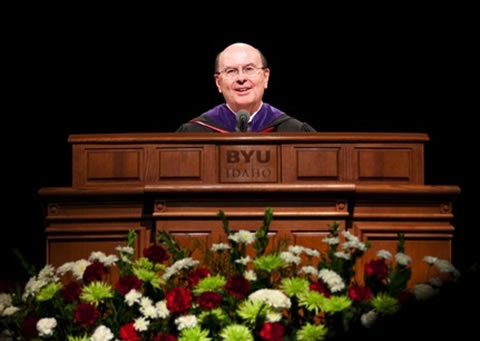 Elder Quentin L. Cook of the Quorum of the Twelve tells graduating students at Brigham Young University—Idaho that they should be active participants, not silent observers, as they share knowledge and strengthen their families and communities.

“My purpose today is to challenge you to work with people of other faiths to improve the moral fabric of this nation and the world and to protect religious freedom,” Elder Quentin L. Cook of the Quorum of the Twelve Apostles said to students graduating from Brigham Young University-Idaho.

“In order to do this, you need to understand and comprehend ‘things which have been’ with particular emphasis on certain knowledge and events which were precursors to the restoration of the gospel of Jesus Christ and still need to be protected,” Elder Cook continued.

He explained that understanding events leading up to the Restoration would help students protect, defend, and, with their own unique abilities, share those elements of knowledge, mostly within their families and communities, in a way that will bless mankind and prepare the world for the kingdom of God. Elder Cook issued his challenge during a commencement address at BYU-Idaho on December 16, 2011. 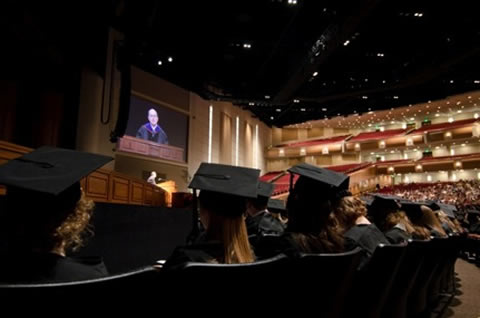 Graduating students at BYU—Idaho listen intently as an apostle reviews with them four events that opened the door for the restoration of the gospel.

Precursors to the Restoration

Elder Cook reviewed four major “things which have been” that paved the way for the restoration of the gospel and suggested an additional three courses of action, relevant today, that will  “build on the great heritage that has been bestowed on each of us.”

The four major precursory events he spoke of were:

Concerning the Bible, Elder Cook said, “This great book of scripture, the King James Bible, is as important to us today as it was 400 years ago. Significantly, we share with the vast majority of citizens a love and appreciation for the Judeo-Christian values set forth in the King James Bible.”

With regard to the Constitution, Elder Cook quoted Elder Dallin H. Oaks of the Quorum of the Twelve Apostles, who was a prominent attorney and judge prior to his calling as an Apostle, and President J. Reuben Clark (1871-1961), who served as First Counselor and Second Counselor in the First Presidency and who also had an extensive legal career prior to his calling. Elder Cook said Elder Oaks and President Clark identify five elements of the Constitution as being particularly inspired: 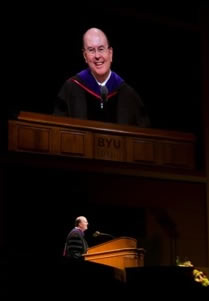 As he speaks in the BYU-Idaho Center, Elder Cook’s image is also shown overhead on a large television monitor. He used the commencement address as an opportunity to counsel graduates to help insure that religious freedom is passed on to future generations.

“It does not require detailed analysis of the Constitution to see that these five basic fundamentals have been a great blessing to the United States and were necessary to the restoration of the gospel of Jesus Christ,” Elder Cook said.

Elder Cook briefly described advancements in communication and medicine by quoting Elder Gerrit W. Gong of the Seventy, saying that heaven’s hand could be seen in the affairs of men.

Finally, Elder Cook spoke of the return to Judeo-Christian moral principles that was especially necessary for the restoration of the gospel.

Then Elder Cook asked the graduates, “How can you help bring about this restoration of morality in our day and help preserve religious freedom?” He answered his own question by offering several suggestions.

Presidents of the Church have made it clear that all religions should work together for the common good.

“Our challenge is to help people without religious faith understand that the protection of moral principles grounded in religion is a great benefit to society and that religious devotion is critical to public virtue,” Elder Cook said.

“One of the reasons the attack on the moral and religious principles has been so successful is the reluctance of people of faith to express their views.”

Elder Cook closed by challenging again that “you join with people of all faiths who feel accountable to God in defending religious freedom so it can be a beacon for morality. … We ask you to do this on the Internet and in your personal interactions in the neighborhoods and communities where you live. Be an active participant, not a silent observer.”