From defending the Lord’s definition of marriage to teaching how to receive personal revelation from God, living prophets and apostles addressed a variety of critical topics at the most recent general conference of the Church. 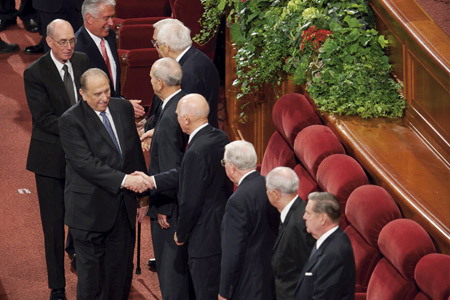 Members of the First Presidency greet members of the Quorum of the Twelve Apostles following a session of general conference, which was held Oct. 2 and 3 at the Conference Center in Salt Lake City, Utah, USA, and transmitted throughout the world.

Members of the Quorum of the Twelve Apostles, sustained by millions worldwide as prophets and apostles, addressed a variety of subjects during the 180th semiannual general conference of the Church at the Conference Center in Salt Lake City on October 2–3.

To watch, listen to, or read messages from the prophets and apostles, visit the General Conference page.

The President of the Quorum of the Twelve Apostles, President Boyd K. Packer, defended morality, marriage, and family life. “Regardless of the opposition, we are determined to stay on course,” he said. “We will hold to the principles and laws and ordinances of the gospel. If they are misunderstood either innocently or willfully, so be it. We cannot change; we will not change the moral standard. We quickly lose our way when we disobey the laws of God.”

Elder L. Tom Perry encouraged the young men of the Church. “Young men of the Aaronic Priesthood,” he said, “I testify to you that the Lord is bound by solemn covenant to give you blessings according to your faithfulness. If you will heed the voice of the Holy Ghost and will follow His direction, you will be blessed with the ministering of angels. This blessing will add wisdom, knowledge, power, and glory to your lives. It is a sure blessing promised to you by the Lord.”

Elder Russell M. Nelson, encouraging missionary work, said, “Each exemplary follower of Jesus Christ can become an effective member missionary. Members and full-time missionaries may walk arm in arm in bringing the blessings of the gospel to cherished friends and neighbors.”

Elder Dallin H. Oaks, speaking on the subject of revelation, noted that, “The Lord has given His children two lines of communication with Him—what we may call the personal line and the priesthood line. All should understand and be guided by both of these essential lines of communication.”

Elder M. Russell Ballard warned of the subtle deceit of the devil. “Like the fly fisherman who knows that trout are driven by hunger, Lucifer knows our ‘hunger,’ or weaknesses, and tempts us with counterfeit lures which, if taken, can cause us to be yanked from the stream of life into his unmerciful influence. And unlike a fly fisherman who catches and releases the fish unharmed back into the water, Lucifer will not voluntarily let go. His goal is to make his victims as miserable as he is.”

Elder Richard G. Scott spoke of the transforming power of faith and character. “With even your strongest faith, God will not always reward you immediately according to your desires. Rather, God will respond with what is in His eternal plan best for you, when it will yield the greatest advantage. Be thankful that sometimes God lets you struggle for a long time before that answer comes. That causes your faith to increase and your character to grow.”

Elder Jeffrey R. Holland offered appreciation for those who are humble. “In whatever country you live, however young or inadequate you feel, or however aged or limited you see yourself as being, I testify you are individually loved of God, you are central to the meaning of His work, and you are cherished and prayed for by the presiding officers of His Church.”

Elder David A. Bednar, addressing our need for the companionship of the Holy Ghost, said, “The Holy Ghost does not become operative in our lives merely because hands are placed on our heads and those four important words [receive the Holy Ghost] are spoken. As we receive this ordinance, each of us accepts a sacred and ongoing responsibility to desire, to seek, to work, and to so live that we indeed ‘receive the Holy Ghost’ and its attendant spiritual gifts.”

Elder Quentin L. Cook encouraged Latter-day Saints to be an example of Christian living. “The moral foundation of our doctrine can be a beacon light to the world and can be a unifying force for both morality and faith in Jesus Christ. We need to protect our families and be at the forefront together with all people of goodwill in doing everything we can to preserve light, hope, and morality in our communities.”

Elder D. Todd Christofferson, speaking about consecration, said, “True success in this life comes in consecrating our lives—that is, our time and choices—to God’s purposes (see John 17:1, 4 and D&C 19:19). In so doing, we permit Him to raise us to our highest destiny.”

The Quorum of the Twelve Apostles are sustained by millions of Latter-day Saints worldwide as prophets, seers, and revelators, who receive inspiration from God to direct the affairs of His Church today. They serve under the direction of the First Presidency, which consists of the President of the Church and his two counselors. Their messages are intended not only for members of the Church but for all of Heavenly Father’s children throughout the world.