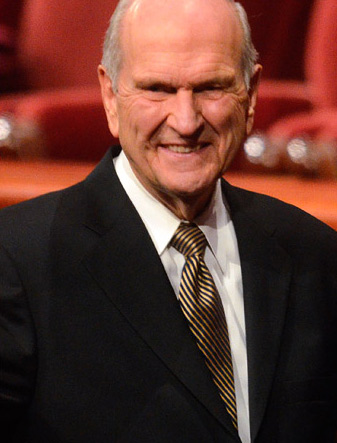 President Russell M. Nelson is widely known for teaching that the power to heal is a gift from God.

Dr. Russell M. Nelson was in Manzanillo, Mexico, in February 1978, attending medical meetings with the group of doctors he had graduated with 30 years earlier. Suddenly, one of the doctors became seriously ill, suffering from massive internal bleeding in his stomach. Under normal circumstances, any of the physicians in the room could have treated him. But in a remote fishing village with no hospitals nearby, no planes that could fly at night, and no medical equipment, they realized they were helpless as they watched their colleague suffer.

“All the combined knowledge and concern there could not be converted to action to help our friend as we saw his life ebbing before our eyes. We were powerless to stop his bleeding,” President Nelson said.

The man asked for a blessing. Several of the doctors who held the Melchizedek Priesthood immediately responded, and Dr. Nelson acted as voice. “The Spirit dictated that the bleeding would stop and that the man would continue to live and return to his home and profession.” The man recovered and returned home.

“Men can do very little of themselves to heal sick or broken bodies,” President Nelson said. “With an education they can do a little more; with advanced medical degrees and training, a little more yet can be done. The real power to heal, however, is a gift from God. He has deigned that some of that power may be harnessed via the authority of His priesthood to benefit and bless mankind when all man can do for himself may not be sufficient.” 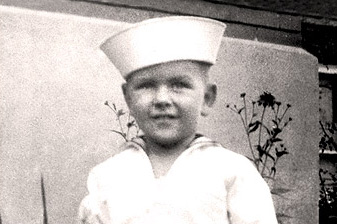 As a child, Russell Nelson wears a sailor suit and displays interest in a wide range of activities. 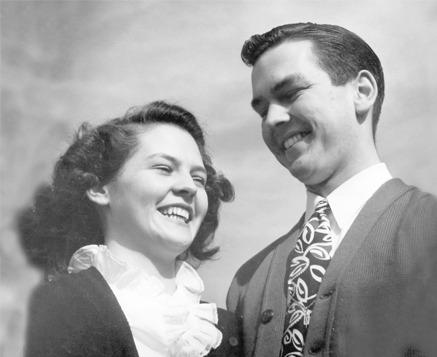 Russell M. Nelson and Dantzel White Nelson share a smile. They met in 1942, married three years later, and had 10 children. She passed away in 2005.

Preparing for the Future

As a boy, Russell Nelson had many interests, but in college he decided to study medicine. By the time he received his degree in June 1945, he was already well into his first year of medical school, and he completed the four-year course in three years. In August 1947, he was a full-fledged M.D. at age 22, having graduated with highest honors.

In the meantime he met and married Dantzel White. Russell had been persuaded to participate in a play at the university, and she was a lead soprano in the play. When he met her and heard her sing, he was smitten. He needed no further motivation to perform in the play, and they were married three years later in August 1945 in the Salt Lake Temple. They had 10 children. Sister Nelson passed away in February 2005. In April 2006, Elder Nelson married Wendy L. Watson. Today she often accompanies him on his Church assignments.

After his internship at the University of Minnesota, Dr. Nelson worked on a team that made medical history: After three challenging years, they developed the first machine that performed the functions of a patient’s heart and lungs during open-heart surgery.

Before returning to Salt Lake City, he enlisted to serve a two-year term of medical duty in the U.S. Army during the Korean War; he served in Korea and Japan and at Walter Reed Army Medical Center in Washington, D.C. Later he worked for a year at Massachusetts General Hospital in Boston, then returned to the University of Minnesota for a year and received his PhD in 1954.

Over the years, he literally touched the hearts of thousands of patients, including top Church and civic leaders. In 1972 he performed heart surgery on Elder Spencer W. Kimball. Following the surgery he received a personal witness that his patient would someday become President of the Church. 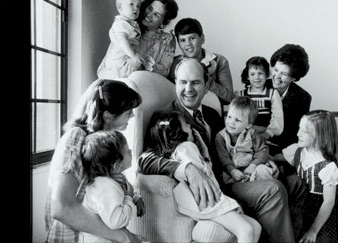 A father of 10 children, President Nelson maintains lasting relationships with them that began when they were young.

But no matter how involved President Nelson has been in important activities, his top concern has always been his family. His children say that he has always made it a priority to be at home when he is at home, and over the years, his devotion has repeatedly reassured them of their father’s love for them.

Even with a difficult schedule, he made time to establish a lasting relationship with each one. Since he had to travel extensively, he often took one family member with him, either Sister Nelson or one of the children. Rather than considering this an extravagance, he viewed it as a wise investment. 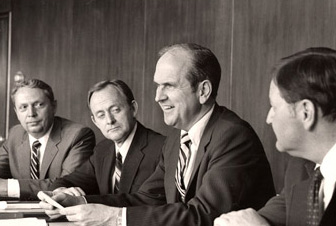 President Nelson serves enthusiastically in whatever he is called to do, both in Church and professional settings. 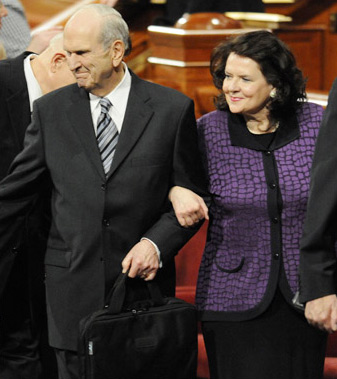 President Nelson and his wife, Wendy Watson Nelson, leave the stand after a session of the April 2011 general conference. They were married in 2006.

Through years of Church service, President Nelson has consistently given his best.

When two colleagues—a husband and wife—showed interest in the Church, he explained some of the principles and loaned them a copy of the Book of Mormon. A week later they returned it with a polite thank you.

“What do you mean, ‘Thanks a lot’?” he asked his two friends. “That is a totally inappropriate response for one who has read this book. You didn’t read it. Please take it back and read it, and then return it to me with a much more appropriate reply.”

Admitting they had only thumbed through it, they accepted his challenge. Three weeks later they returned with tears in their eyes. “We know this book is true,” they said. “How can we learn more?”

Smiling, the young doctor said, “Now I know you’ve read the book. Now we can proceed.” He eventually baptized them.

Russell M. Nelson has also served the Lord as a stake president after serving in bishoprics and high councils. In 1971 he became the general president of the Sunday School. Then in 1979 he was called as a regional representative. Each time a call came he moved forward, confident that the Lord would bless him in his assignments.

“When Elder Kimball called me and set me apart as stake president in 1964, we were just starting in medicine on the challenge of replacing the aortic valve,” President Nelson said. “Mortality rates were high, and the time commitment to each patient was extremely high—almost one-on-one for many, many hours, sometimes even days. When Elder Kimball called me to be the stake president, he jokingly said, ‘Everybody we’ve interviewed around here says you might be all right, but you don’t have the time. Do you have the time?’ 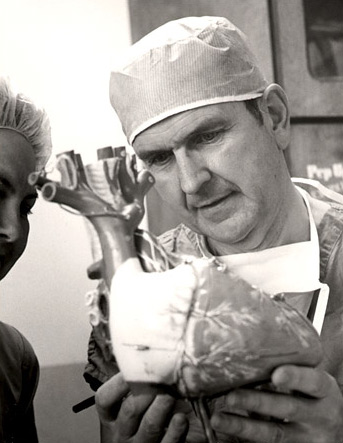 Dr. Nelson examines a model of the human heart. As a surgeon, he was instrumental in creating the first heart-lung machine and performed many open-heart operations.

“I replied, ‘I don’t know about that, but I have the faith!’ And then I explained to him the challenges—that getting into the field of aortic valve replacement was a heavy time commitment and that our mortality rates were high. Both problems were of great concern to me.

“In the blessing that he pronounced upon my head that day, he specifically blessed me that our mortality rates with aortic valve surgery in particular would be reduced, and that no longer would the procedure be the drain on my time and energy that it had been in the past. The following year, the time demands of the operation did decrease, and I’ve had the time necessary to serve in that and other callings. In fact, our mortality rates went down to where they are today—at a very low and acceptable, tolerable range. Interestingly enough, that’s the very operation I did for President Kimball eight years later.”

This dedicated and enthusiastic service prepared Russell M. Nelson to be called to the Quorum of the Twelve Apostles on April 7, 1984. He was sustained and set apart on January 14, 2018, as the 17th president and prophet of the Church.

“I have a deep and abiding faith in God and in His Son, Jesus Christ,” President Nelson said. “The work I’m now engaged in is the most important cause in the world. It’s all-encompassing, it’s fulfilling, and it’s challenging. And I must do my best, because I have an accountability for this stewardship.”

The First Presidency (below). 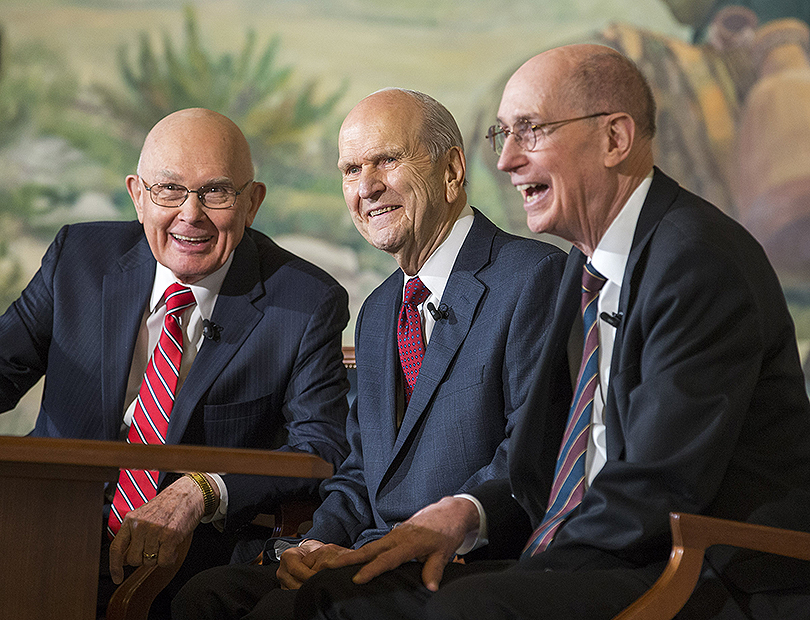