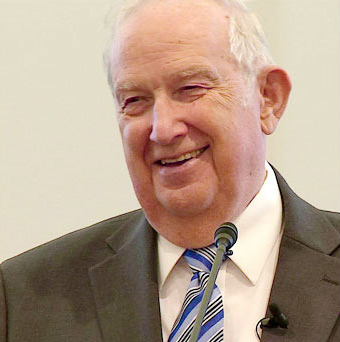 Elder Scott touches many souls when he speaks of eternal families, repentance, forgiveness, and other gospel doctrines and principles.

When they were growing up, Richard G. Scott and his brothers were encouraged by their parents to explore—to tinker with mechanical things, discover how they worked, build them, and repair them. His parents even trusted the boys to fix the family car. He smiles: “One time, as a joke, we put a caboose whistle on the exhaust manifold of that car!”

Born on November 7, 1928, in Pocatello, Idaho, and reared in Washington, D.C., Richard developed an early interest in science. His parents, Kenneth Leroy Scott and Mary Eliza Whittle Scott, encouraged this interest, and they also encouraged him to develop character. Although at that time his father was not a member of the Church and his mother was not active, they were people of principle, with high standards of integrity.

Richard was an outgoing young man; he was a class president in high school, played clarinet in the band, and was drum major for the marching band. As a teenager, he showed a remarkable spirit of adventure while earning his own money for college. One summer he worked on an oyster boat off the coast of Long Island. Another summer he cut down trees in Utah for the Forest Service. He also repaired railroad cars for the Union Pacific. 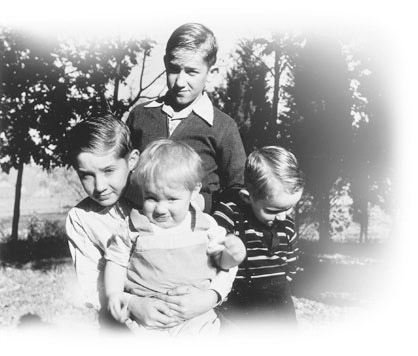 The Scott children were known for living the high standards of integrity they had been taught by their parents.

Sister Scott brought out the best in her husband during her mortal life, and continues to inspire him today.

One summer when he was a little older, his application to work for the Utah Parks Service was denied because all the jobs were taken. He tucked away the rejection letter without telling anyone about it and left for Utah. By the time he had made the trip across the United States, he had only three cents left in his pocket.

“Didn’t you receive our letter?” the man asked when he showed up.

“Yes,” Richard replied, “but I would like to work anyway. Is there a position as desk clerk?” The man laughed incredulously. Lowering his expectations, Richard asked, “How about bellboy?” He got hardly more than a laugh. Swallowing hard, Richard pulled out all the stops: “All right,” he said, “I’ll wash dishes!”

Richard washed dishes—but he also went into the kitchen to see if he could help. By summer’s end, he was the number-two cook.

While he was adding to his college savings account, he was also growing spiritually. During spare minutes he read and pondered the Book of Mormon and experienced a powerful spiritual awakening.

Elder and Sister Scott enjoy a quiet moment outdoors with two of their children and their granddaughter. Hiking and bird watching have always been among their favorite activities. 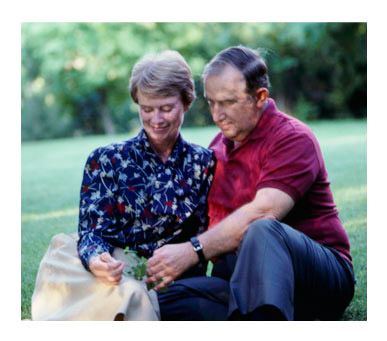 Elder Scott and his wife, Jeanene, were close as a married couple, and since her death in 1995, he continues to think of her and speaks about her often.

Back home in Washington, D.C., he attended George Washington University, studying mechanical engineering and playing clarinet and saxophone in a jazz band. As he neared graduation, all of his career plans seemed to be on schedule. But then “the Lord placed a bombshell in my little world: Jeanene Watkins.” A vivacious young woman, Jeanene was the daughter of Utah’s Senator Arthur V. Watkins.

Their budding romance presented a problem for Richard’s carefully laid career plans. One night Jeanene said to him, “When I marry, it will be in the temple to a returned missionary.” He had not thought much about a mission, but with that motivation, he prayed harder than ever before and ended up talking to the bishop about it. Soon after graduation, he left for a mission to Uruguay. Jeanene graduated the following June in sociology and left the next day for a mission to the northwestern states. Two weeks after he returned, they were married in the Manti Temple.

As he immersed himself in the Book of Mormon during his mission, his testimony became more and more sure. As he followed the examples of Christlike service in the scriptures, he discovered that the more he forgot himself and served others, the stronger his faith became.

Before his mission, a professor had tried to dissuade him from going; he would be throwing away a promising career, the man said. But a few weeks after returning from Uruguay, Richard was invited to be interviewed by Captain (later Admiral) Hyman G. Rickover for a job on a top-secret military project involving nuclear energy. 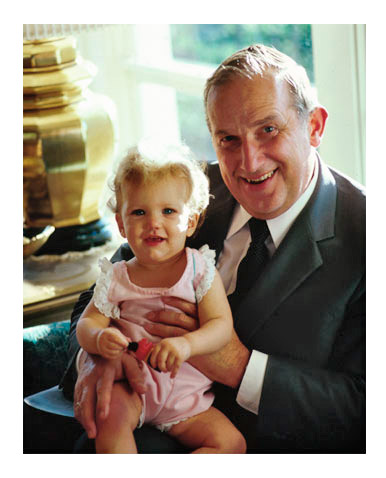 Elder Scott, holding his first granddaughter, cherishes his role as both a father and a grandfather, as is often expressed in his discourse on the eternal nature of families.

The interview seemed to go miserably. In response to one question, Richard mentioned his mission. “What mission?” Captain Rickover demanded. “And what do I care about your mission?”

Richard reacted to that, because his mission had been such a precious time in his life. “Everything I really treasure in life began to unfold because of that mission,” he says. “So I decided to respond vigorously to every question.”

Then the captain asked, “What was the last book you read?”

“The Book of Mormon,” he responded. And so it went through the rest of the interview.

With all hopes extinguished, Richard got up to leave.

“Just a minute,” said the captain. “I’ve been testing you to see if you could stand up for what you believe. This is not going to be an easy project. We need people who can work with confidence.” Richard got the job working on the design of the nuclear reactor for the Nautilus, the first nuclear-powered submarine.

Later, while checking personnel records, he discovered the name of the professor who had urged him not to go on a mission; the man was now working under Richard’s direction, about three levels down.

Brother Scott worked for Admiral Rickover for 12 years. In 1955 he completed the equivalent of a doctorate in nuclear engineering at the Oak Ridge School of Reactor Technology in Tennessee. (Because of the classified nature of the work, a university degree couldn’t be given.) He also helped in the development of the first commercial, land-based nuclear power plant. 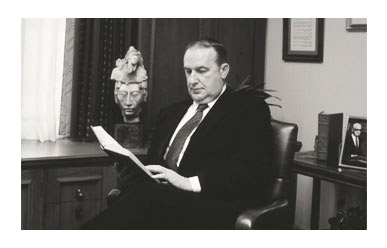 Study and deep thought are evident in the teachings and writings of Elder Scott, who repeatedly counsels about the need for repentance and forgiveness.

During those years, Brother Scott served as president of a seventies quorum and as stake clerk. And then in 1965, when he was 37 years old, he was called to be a mission president in Argentina. Again he had to make a decision between a mission and his career—and he was vigorously encouraged not to accept the mission call. But again there was no question in his mind, even though it appeared to some that he was sacrificing his career.

When the Scotts returned to Washington, D.C., Brother Scott joined other Rickover colleagues who had a private consulting firm specializing in nuclear engineering. He served as counselor in a stake presidency and later as a regional representative. During that time the Washington D.C. Temple was completed, and President and Sister Scott invited many friends and associates to their home in preparation for the temple open house. One office companion and his family were baptized, as was a neighbor family.

Then in 1977, eight years after being released as mission president, Richard G. Scott was called to be a member of the First Quorum of the Seventy. For a year he served as managing director in the Priesthood Department, then as executive administrator in Mexico and Central America. He and his family lived in Mexico City for three of his six years in that assignment.

On September 29, 1988, President Ezra Taft Benson—“with tenderness and love and great understanding that I will never forget”—extended to Elder Richard G. Scott a call to become an Apostle of the Lord and a member of the Quorum of the Twelve Apostles. Elder Scott was sustained two days later, on October 1. 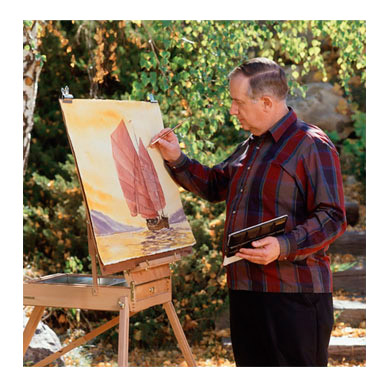 Elder Scott finds great joy in emulating the beauty of life and nature through painting and water coloring.

Elder Scott is well known to many members of the Church for the love he expresses for his wife, who passed away in 1995. The Scotts enjoyed spending time together. They shared an interest in jazz music, as well as collecting and listening to South American folk music. Both enjoyed painting, water coloring, and hiking. Birding—as a couple and as a family—also captured their interest. “There’s a bird feeder in the backyard, and when the family eats out on the patio, there’s always at least one pair of binoculars at the table.”

True to his mechanical inclinations, Elder Scott was the family fix-it man, taking care of the plumbing, the electricity, the cars, and anything else that needed work. He built a deck onto their current home and designed and built an additional living room, master bedroom, and bathroom onto a previous home. 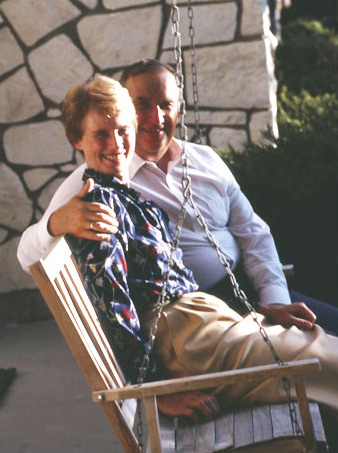 After the passing of his wife, Elder Scott continues to express the powerful motivation she provides for him to be worthy to receive the eternal blessings promised in the temple.

In a fireside address given on September 12, 2010, Elder Scott spoke about his family and the importance of temple blessings: “What to me has become a vitally important part of remembering the blessings that come from the temple is that I love my wife more each day.

“Fifty-seven years ago, on July 16, 1953, my beloved Jeanene and I knelt as a young couple at an altar in the Manti Utah Temple. President Lewis R. Anderson exercised the sealing authority and pronounced us husband and wife, wedded for time and for all eternity.

“My precious wife, Jeanene, even when afflicted with an aggressive terminal disease, consistently found joy in life.

“Our seven children are bound to us by the sacred ordinances of the temple. Now, Jeanene, and two of our children are beyond the veil. They provide a powerful motivation for each remaining member of our family to live so that together we can receive all of the eternal blessings promised in the temple.

“I know that as I continue to live worthily I will have the privilege of being with my beautiful wife, whom I love with all my heart, and with those children who are with her on the other side of the veil, because of the opportunities made possible through the eternal ordinances that were performed in the Manti Temple.”