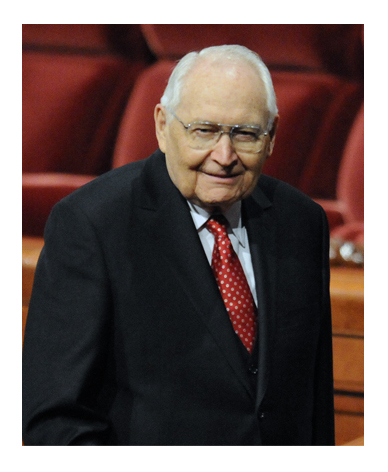 Elder Perry leaves a lasting impression because of his stature, his style, and his resonant voice.

As a young mother, Roberta Jensen sat on the airplane trying to feed her new baby and quiet her three other children—all under the age of four. She was exhausted, embarrassed, and alone. She was on her way home for a visit that was intended to be a rest from the pressures of supporting her husband in school, raising a young family with him, and struggling to make ends meet. But so far, the trip had been anything but restful.

The passenger across the aisle was a tall, cheerful man. When she spoke to him, he introduced himself as Elder L. Tom Perry of the Quorum of the Twelve Apostles. “An Apostle right next to me,” she thought. “I wonder if he can feel the turmoil I’m in and read the feelings of my heart.”

As the plane took off, the children cried—all of them. Roberta’s embarrassment turned to panic. Elder Perry put away his briefcase and asked gently, “May I hold the baby?” During the rest of the trip he cared for the infant, rocking him to sleep, while the grateful mother calmed the other children and gave them snacks. When dinner was served, she reached for the baby, but Elder Perry, still smiling, said the baby was sleeping peacefully and there was no need to disturb him.

“I survived the trip,” she said, “and retained a dear memory that will be a part of our family forever. … He saw someone in need of help and he set aside his own needs to give that help.” 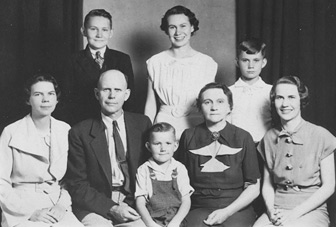 Young Tom (top row, left) with his parents, brothers, and sisters. Elder Perry still remembers the spiritual training his parents gave him as a boy.

L. Tom Perry remembers the spiritual training his parents, Leslie Thomas Perry and Nora Sonne Perry, gave him as a boy. He remembers his faithful mother waiting outside his bedroom door each night to make sure he said his prayers.

Young Tom was committed to perfect attendance at church. One Sunday he was sick with tonsillitis, and his parents decided the attendance record would have to be broken. All members of the family left for Church except Tom and his mother. But the family was surprised to see them enter the chapel a few minutes after the meeting had started. Despite being ill, Tom made every effort to be where he was supposed to be.

Among the neighborhood boys, Tom was the leader. No umpires were needed for their ball games because of his ability to arbitrate disputes. As a result, the games were remarkably free from contention. 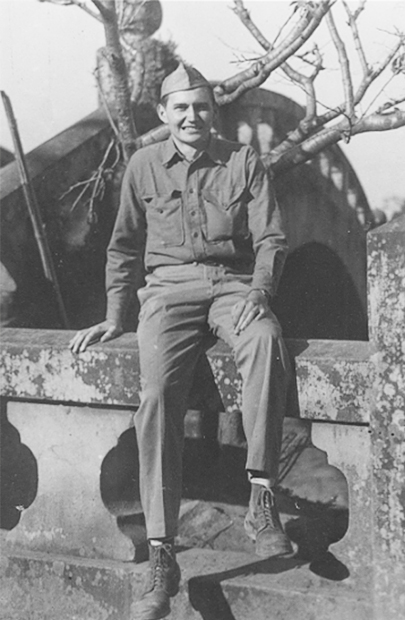 In the Marine Corps, Tom Perry was among the first occupation troops to enter Japan after World War II. 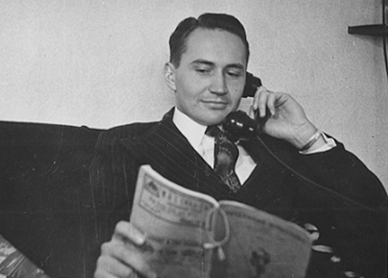 As a businessman, L. Tom Perry found he was blessed by what he had learned as a bishop’s counselor.

Elder Perry attended Utah State Agricultural College in Logan, Utah, (now Utah State University), Utah, from 1940 to 1941. He then served a mission to the Northern States, where he gained a great love for the Book of Mormon. Weeks after returning, he was drafted into military service and volunteered for the Marine Corps. He was among the first of the occupation troops to enter Japan after World War II.

Following his release from the Marine Corps in the fall of 1946, Elder Perry returned to Logan and Utah State Agricultural College, where he studied business and graduated in 1949. He did graduate work in finance the following year.

A successful businessman, Elder Perry gives credit to the principles he learned from leadership responsibilities in the Church. Telling of one of his early experiences, he said:

“When I was a young man in my late twenties I was offered the position of controller in a small store in central Idaho after only six months of experience in the retail business. I worked a month in this new position before my family could come and join me. During that month, I almost lived at the store. Working until the early hours of the morning was a common occurrence as I attempted to keep up with the workload that I had been assigned. I was having a desperate time trying to learn a new job and keep pace with the responsibilities I had been given.

“Just after my family arrived, a car pulled up in front of our home one evening and I was invited to visit with a member of our stake presidency and a member of our ward bishopric. I was shocked: the bishop’s counselor was being called as the new bishop, and he had selected me as his second counselor. My first reaction was to say, ‘No. I am too busy,’ but the training of my parents soon rang louder than my first reaction, and I agreed to serve.

“This first experience in the bishopric was the best education I have ever received in organization and management. I found the Lord’s way was transferable to business. As I practiced the techniques taught to me in Church service, I became more efficient in my business assignments. I soon found myself with more time for family, Church, and business responsibilities.” 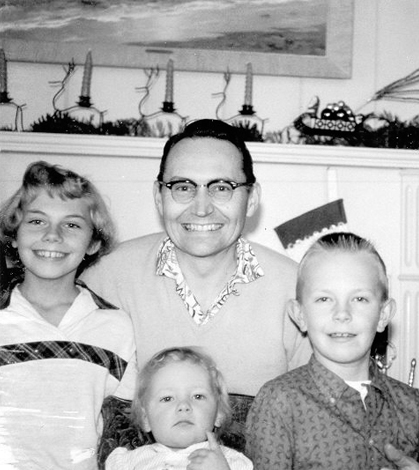 As a father with young children, L. Tom Perry made spending time with his three children a priority.

Tom Perry made spending time with his family, which included his wife Virginia and three children, a real priority. Elder Perry involved his family in his Church activities whenever possible. Over the years they typed and proofread talks, made copies for him, found quotes and stories, and served as timekeepers.

His son, Lee, spoke of the times he accompanied his father as a timekeeper on speaking assignments while his father was a high councilor in the Sacramento area. 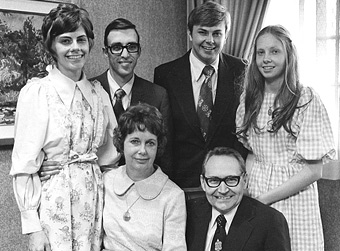 Elder Perry enjoys time with his family in the early 1970s, not many years before the passing of his wife, his daughter, and two of his grandchildren. 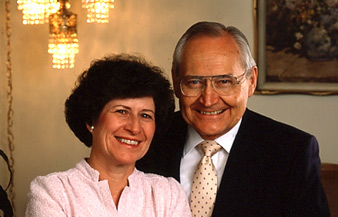 Sister Barbara Perry says she and her husband enjoy doing many things together, including gardening, working on the house, jogging, walking, and fulfilling Church assignments.

Climb the Next Mountain

While experiencing the passing of his wife in 1974, his daughter in 1983, and two of his grandchildren, Elder Perry relied on his faith in a loving Father in Heaven: “The Lord is very kind. Even though some experiences are hard, He floods your mind with memories and gives you other opportunities. Life doesn’t end just because you have a tragedy—there’s a new mountain to climb. Don’t spend a lot of time sulking over what you’ve lost. Get on with climbing the next mountain.”

In January 1976 he was introduced to Barbara Dayton, and they were married that April in the Salt Lake Temple. “[We] enjoy doing just about everything together,” Sister Perry says. “We’ve gardened together; we’ve scraped ceilings. We jog together a couple of times a week and take long walks.” Whenever possible, Elder Perry drives to conference assignments instead of flying so he can take Barbara with him.

L. Tom Perry was sustained to the Quorum of the Twelve Apostles on April 6, 1974, after serving as an Assistant to the Twelve since 1972. As an Apostle of Jesus Christ, he bears special witness of the Savior: “I marvel that the Father loved us enough to sacrifice His Son, and that we have the comforting assurance that life goes on forever—that death is not the end. If we adhere to the gospel plan, there are great blessings in store for us. The Lord’s system works to bless our lives here as well as in the eternities to come. It’s the only comforting assurance you can find on the earth. And when you have it, it’s the greatest blessing you could ever receive.”