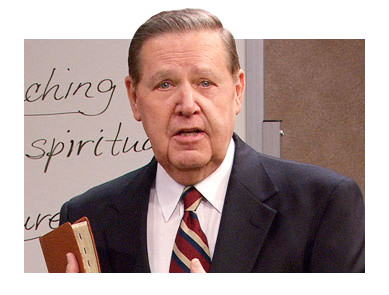 Elder Holland speaks from his heart to Church leaders during a worldwide leadership training meeting. 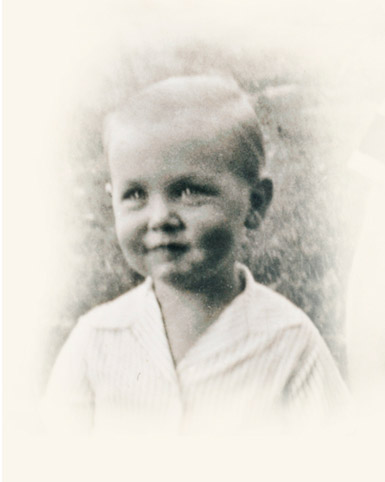 Jeff Holland has a sparkle in his eye even as a youngster. His mother remembers him as being always obedient.

When Jeffrey R. Holland served as a missionary in the British Mission, an early experience testified to him of the truth and power of the gospel.

A man in his eighties—a member of the Church who fixed bicycles for a living and always fixed the elders’ bikes for free—came riding to the missionaries’ door one night in a torrent of rain to see if the elders would come and administer to his wife.

Recognition in the Rain

“That really touched me,” Elder Holland said. “I was very moved that this 80-year-old man would venture through the heavy East Anglian rain to seek out the spiritual help of two young boys.” The young Elder Holland and his companion administered to the frail lady, who was slowly dying and in such pain that she had not slept for 48 hours.

“It was the first time I had ever done that, being a new missionary of just two weeks,” he said. “I remember leaving the old fellow and his wife up in the room as we went downstairs in their tiny house to put on our raincoats and get ready to go out. And then he came down—this sweet little old man with his soiled, bike-repairing hands—and he dabbed at his eyes and managed to say, through his emotions, ‘She’s sleeping now.’

“I remember vividly going out into that rain and weeping, conscious of a spiritual revelation—a kind of ‘coming-to-realize-what-I-had’ feeling. There were many other considerably more miraculous things that happened throughout my mission,” Elder Holland admits, “but none perhaps that touched me more deeply than this first manifestation which caused me, an average, raised-in-the-Church, seminary-attending boy from southern Utah who had never really been anywhere, to examine my own values, and my own priesthood, and my own faith—and really see that they worked.” 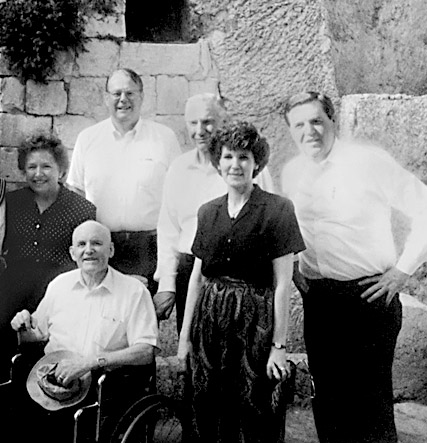 Always Toward, Never Away

Jeff Holland was born to Frank D. and Alice Bentley Holland on December 3, 1940. Growing up, he was a natural leader. “Jeff was in a position to lead his crowd away from church or toward it, and he chose always to go toward it,” said Karl Brooks, former mayor of St. George, Utah. Jeff Holland showed others that you could have fun while living the gospel.

“He never gave me any trouble,” his mother said. “He was always at church, and he always took care of his priesthood duties.” Once when he was a youth, she let him go to a party with the understanding that he would be home by ten o’clock. Later, when he looked at the clock and realized that he had only 15 minutes to make it home, he ran from one end of St. George to the other.

While he was growing up, Jeff Holland’s central joy in life was sports. “I played on every kind of team that could have been assembled,” he said. One benefit of his high school involvement in athletics was it kept him close to the young woman who would later become his wife. Patricia Terry was a cheerleader who had moved to St. George just as she entered high school. She and Jeff dated for two years before his mission. 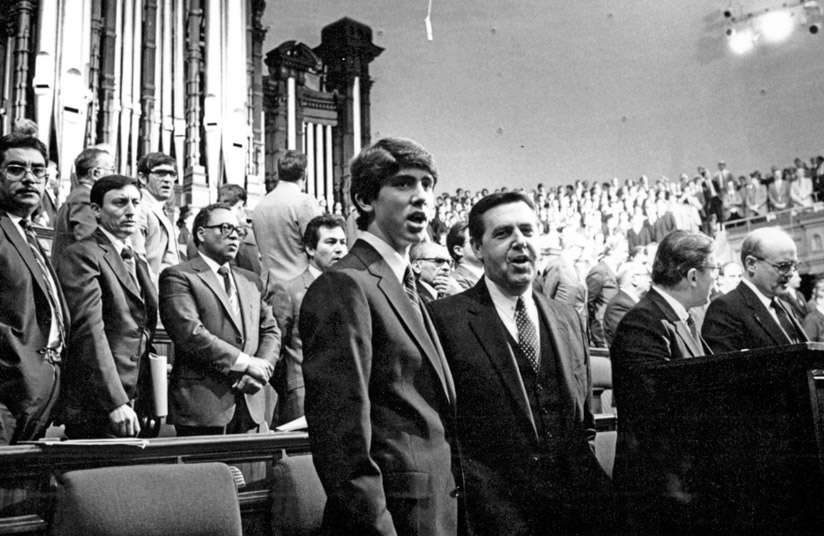 Elder Holland and his son Matt sing together during a meeting in the Salt Lake Tabernacle. 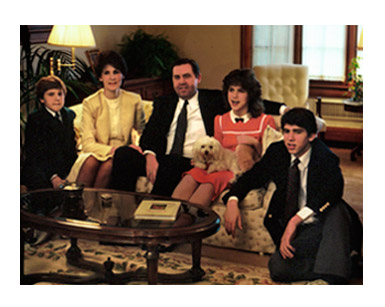 Though he was active in the Church, enjoyed seminary, and lived the gospel, Elder Holland credits Pat’s faith with solidifying his determination to serve a mission at a time when it was not so clearly delineated that every worthy young man should go. He looks back on his service as “the major spiritual turning point of my life—the beginning of my beginnings” in mature gospel growth.

With the arrival of a new mission president, Marion D. Hanks, came inspiration that changed his future. “President Hanks taught me to love the scriptures, especially the Book of Mormon,” Elder Holland said. “He had a profound influence on my life.”

Before his mission, he had every intention of becoming a doctor. But, he explains, “I came home from my mission believing that God intended me to be a teacher.” 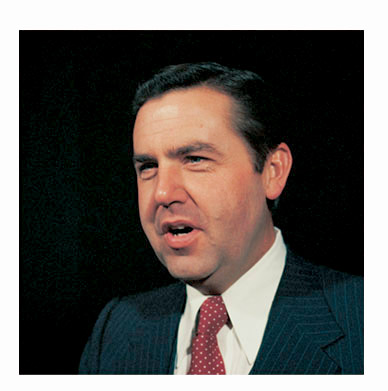 Elder Holland is known for his ability as a teacher. Prior to being called as an Apostle, he was an instructor and administrator in the Church Educational System, and he also served as president of Brigham Young University.

On completion of his graduate work, he was hired as an institute teacher in the Church Educational System. After a year of teaching institute in Hayward, California, he was appointed director of the Seattle [Washington] institute. Then, knowing that a lifelong career in the field of education would mean a need for more schooling, including a doctoral degree, in 1970 the Hollands moved to New Haven, Connecticut, where he would attend Yale University. While there he was called to serve in the stake presidency.

“What I really got was an education in Church government,” he said, speaking of his calling. The experience prepared him for service in two other stake presidencies and as a regional representative before his call to serve as a General Authority. 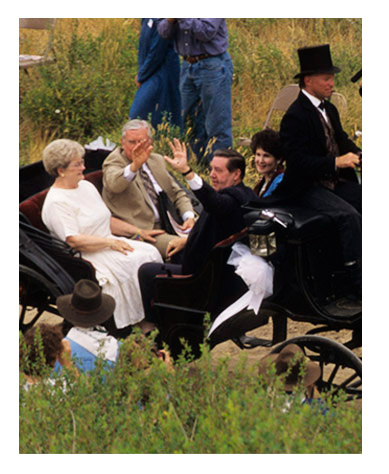 Elder and Sister Holland and Elder M. Russell Ballard and Sister Ballard wave to onlookers during a carriage ride in 1997.

Elder and Sister Holland have three children. Their son Matt recalls that spiritual training was a part of everyday family life. On an outing when Matt was 12, he had his first experience with personal revelation.

Returning from an exploring trip on backcountry roads, he and his father came to an unexpected fork and could not remember which road to take. It was late in the day, and darkness would soon be enveloping them. Seizing a teaching moment, Jeffrey Holland asked his son to pray for direction. Afterward, he asked his son what he felt, and Matt replied that he felt strongly they should go left. Replying that he had felt the same way, his father turned the truck to the left. Ten minutes later, they came to a dead end and returned to take the other route.

Matt thought for a time and then asked his father why they would get that kind of answer to a prayer. His father replied that with the sun going down, that was undoubtedly the quickest way for the Lord to give them information—in this case, which one was the wrong road. Now, though the other road might not be familiar and could be difficult in places, they could proceed confidently, knowing it was the right one.

Throughout the years the Holland children felt that their father was available when needed, and that association became even more cherished when Elder Holland was called to the First Quorum of the Seventy on April 1, 1989. 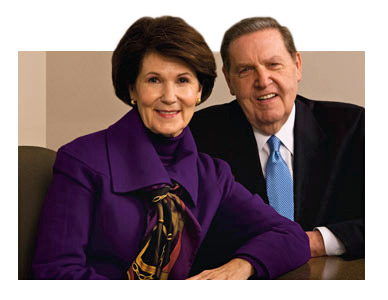 Elder Holland and his wife, Patricia Terry Holland, impress those they meet with their ready smiles and genuine sincerity. They met each other during high school and married after he returned from his mission.

A Witness for Life

Then, on June 23, 1994, Elder Jeffrey R. Holland’s future was altered once more as he was called to serve in the Quorum of the Twelve Apostles.

Elder Holland’s brother, Dennis, remembers that he was not surprised by the call. “All Jeff ever wanted to do was teach the gospel to students in a classroom,” he said. “I was always sure that the Lord had the same goal in mind for him, but that the size of the classroom and the number of students were on a much grander scale than he was envisioning.”

Elder Holland says that serving in the office to which he has been ordained has been for him, as it has been for others who have accepted the same call, a lifelong refining process. “I pledge everything I have and everything I know how to give to witnessing and reaffirming the divinity of the Savior’s life and the restoration of his gospel,” he said. “My greatest joy and my solemn obligation is to testify of Jesus Christ wherever I may go and with whomever I may be for as long as I shall live.”