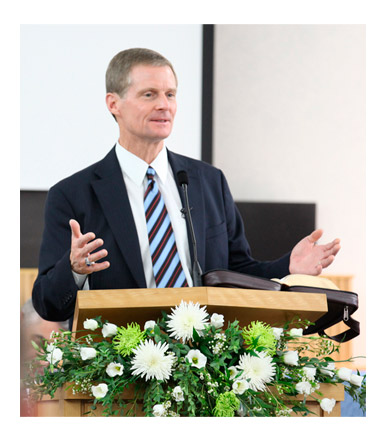 Elder Bednar often discusses questions asked by those he is teaching, using the scriptures and the Spirit to guide them toward finding answers for themselves.

In his first general conference message given as a member of the Quorum of the Twelve Apostles, Elder David Allan Bednar taught doctrine from the scriptures and bore personal testimony of the Savior. What he said made clear the source of his quiet boldness in the Lord’s work and his remarkable capacity to lead others. He said that through the grace of the Lord, through faith in the Atonement of Jesus Christ and repentance of our sins, we can receive strength and assistance to do good works beyond our own capacities. Elder Bednar promised, “In the strength of the Lord we can do and endure and overcome all things.”

Michael says: “It seems that faith has driven out fear in my dad. He is always optimistic. No matter what goes wrong, he always says, ‘Things will work out.’ When it was hard for me during my mission, he told me to work hard and success would come. And he told me when the success came to remember that God gave it and that I did not earn it.” 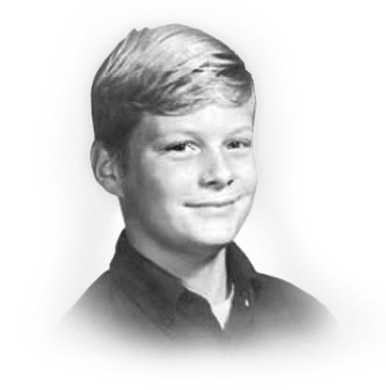 As a young teenager, Elder Bednar was deeply influenced for good by the example of his parents and by positive experiences during his early family life.

Eric describes his father’s example: “He has always gone to the real sources: the words of the prophets and the scriptures. He is bold but he listens. He will ask inspired questions and then listen to your answer, and then he will ask another inspired question. Once he was giving me something similar to a temple recommend interview when I was about 14. He asked me if I sustained President Ezra Taft Benson. I said that I did. And then, after a pause, he asked, ‘What have you read lately of what President Benson has said?’” The lessons from those inspired questions and others like them are still teaching Eric and his brothers.

Jeffrey, the youngest, says, “Since I was little, Dad taught me to set goals and exercise faith.” Jeff also says: “I want people to know that he is an ordinary man who can do extraordinary things because of the strength of the Lord. He is a living witness of the enabling power of the Atonement.”

Sister Bednar says of her husband: “People who know him well would say that he’s tough but tender. He’s competent and compassionate. He’s driven yet discerning. He’s faithful and fearless. He has a great capacity to lead and the wisdom to follow.” 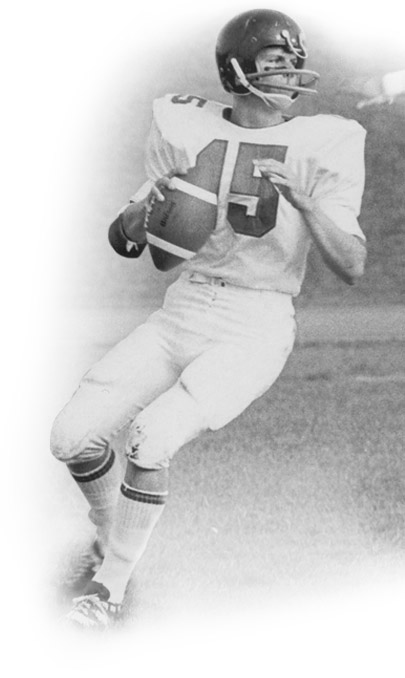 David A. Bednar plays quarterback for his high school football team in northern California. Like many others his age, he loved sports and enjoyed athletic competition.

Like his sons, Elder Bednar was deeply influenced by his early family life. He was born on June 15, 1952, in Oakland, California. His mother, Lavina Whitney Bednar, was a descendant of pioneers, faithful in the Church. Elder Bednar describes her and her faith with one word: “steady.” His father, Anthony George Bednar, was a skilled tool-and-die maker. He was not a member of the Church, although he was constant in attending church with his son, helping with Church functions, and supportive when David was called on a full-time mission to Germany. Years later, after his mission, Elder Bednar baptized, confirmed, and ordained his father.

After his mission David Bednar returned to Brigham Young University and met Susan Kae Robinson, who grew up in the small town of Afton, Wyoming. She came from a family whose members were devoted to the Church and were leaders in the community. Her father was president of a bank and served as a bishop. David and Susan were married in the Salt Lake Temple in 1975.

A Student of the Scriptures

Elder Bednar graduated in 1976 with a bachelor’s degree and in 1977 with a master’s degree, both from BYU. He received a PhD from Purdue University in 1980 and joined the business faculty at the University of Arkansas in Fayetteville. He was called as a counselor in the stake presidency in 1982 at the age of 30. He also served as a bishop, president of the Fort Smith Arkansas Stake, president of the Rogers Arkansas Stake, and then as a regional representative and later as an Area Authority Seventy. 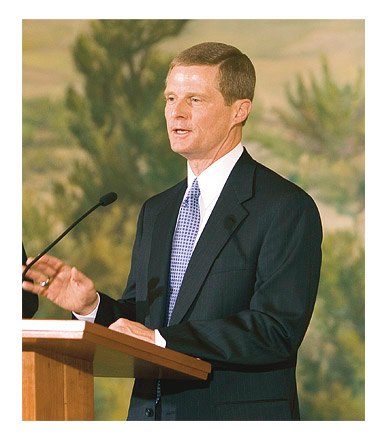 Elder Bednar speaks at a press conference following his call as an Apostle in October 2004.

His reliance on the scriptures and his teaching of their importance have been evident throughout his priesthood service. Elder Bednar remembers: “During my training before my mission, we went to the solemn assembly room in the Salt Lake Temple. President Harold B. Lee was there to answer questions from about 300 missionaries. He stood there in his white suit, holding his white scriptures. He answered every question from the scriptures, or he said, ‘I don’t know.’ I sat there and thought that I would never be able to know the scriptures the way he did, but my objective became to use the scriptures in my teaching the way that I saw President Harold B. Lee do it. That desire is the genesis of all my scripture study.”

As a leader he has tried to encourage that desire in others. He remembers a time in 1987 when he was the bishop in Fayetteville, Arkansas. “I went into Primary one Sunday,” he says. “They had invited me. I decided to wear red suspenders. I thought that I would somehow use them as an object lesson. So I got in the Primary room, took off my coat, and said, ‘Now, boys and girls, the bishop has these red suspenders. How are the scriptures like my red suspenders?’ And one little boy raised his hand and said, ‘The scriptures hold up our faith in Jesus the same way your suspenders hold up your pants.’ I said, ‘That is exactly right.’” 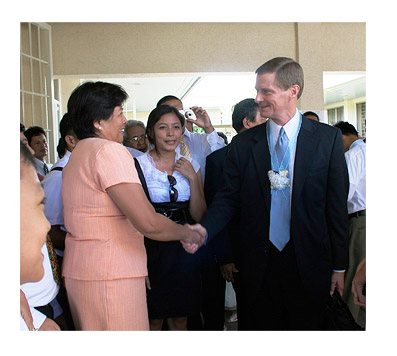 Elder Bednar greets members in Cebu, a southern island in the Philippines, after a meeting.

In 1997 David A. Bednar was appointed president of Ricks College in Rexburg, Idaho. At that time it was the largest private junior college in the United States, with 8,500 students. In his first meeting with the faculty and staff, he said: “I’ve never been a president of a college before. I don’t know how to do this. But I do know some things about teaching, and I hope that foundation will at least provide a beginning.”

As Ricks transitioned from a junior college to a four-year institution known as Brigham Young University—Idaho, President Bednar played an instrumental role in establishing the campus as a home for innovative education while building at its very heart faith in the gospel of Jesus Christ. He set an example for students by always bringing his scriptures to devotionals and asking them to do the same. 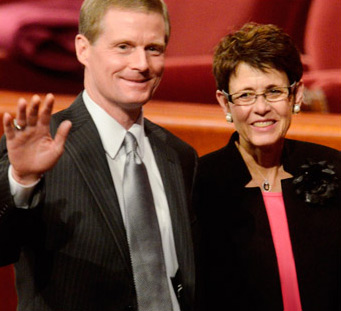 Elder and Sister Bednar wave at the congregation following a session of general conference.

Strength in the Lord

Elder Bednar’s faith in the power that comes from the Atonement has given him confidence that he will receive strength beyond his natural ability to do whatever the Lord calls him to do. Such faith has led him to extend that confidence to those he teaches and leads. Because of that faith in what is possible for him and for others, he generates a contagious optimism and an energy born of the knowledge that “with God all things are possible” (Matthew 19:26, Mark 10:27).

Elder Bednar’s great capacity to lift others and his courage to do whatever the Lord asks of him come from his testimony of Jesus Christ. Prayer, scripture study, and obedience have prepared him for his calling as an Apostle, a special witness of the Savior. His life gives evidence that what he said at the end of his first general conference address continues to be true: “I will go where the Lord and the leaders of His Church want me to go, I will do what they want me to do, I will teach what they want me to teach, and I will strive to become what I should and must become. In the strength of the Lord and through His grace, I know that you and I can be blessed to accomplish all things.”