Unless otherwise indicated, individuals may post material from the Gospel Media portion of this site to another website or on a computer network for their own personal, noncommercial use. This right can be revoked at any time and for any reason. Organizations and legal entities desiring to use material from Gospel Media may request permission from our Permissions page. For more information about using and sharing Church media, check out our FAQ page. 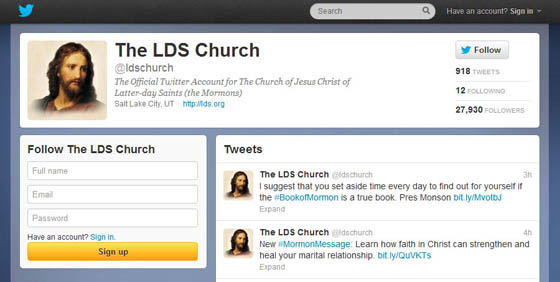 Twitter is a social networking and microblogging website. It allows users to “tweet,” or broadcast, brief messages on their profile page. Users are able to connect with others by subscribing or receiving these short updates by becoming a “follower” of a desired Twitter account.

The Twitter microblogging platform was created in 2006. Like other microblogging sites, it allows users to broadcast information rather than engage in conversations with readers, though the option to converse directly with others exists in the form of Direct Messages and “@mentions.” Users “tweet” messages of up to 140 characters at a time. When a user posts a “tweet,” the message is posted on the user’s profile and is made public, unless the user changes the privacy settings. Most Twitter users interact with the Twitter platform with clients such as TweetDeck or HootSuite rather than directly through Twitter.com.

Twitter currently has approximately 140 million active users who tweet about 340 million times per day. During 2010, an average of 300,000 users joined Twitter each day. To accommodate this growth, Twitter recently moved its technical operations infrastructure to a new data center in the Salt Lake City area. According to a recent survey by the Church’s Research Information Division, 7 percent of Church members use Twitter.