A meetinghouse network is made up of a series of interconnected devices. 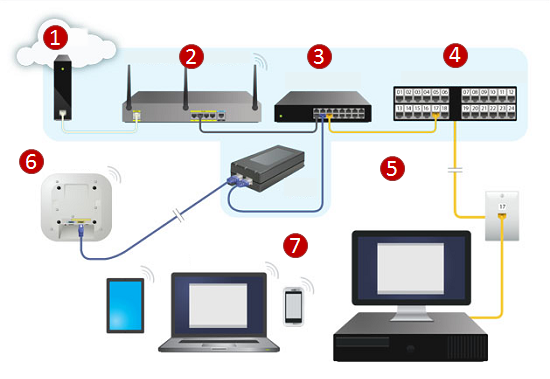 Wired network connections should run from the Meetinghouse Firewall (usually through a network switch) to a patch panel and then out to wall jacks. Devices then connect to the wall jacks with a separate network patch cable.

Wired networking is usually more reliable than wireless and should be used in the following two situations whenever possible:

Some key areas of meetinghouses where wired network connections may be requested include (but are not limited to) the following:

Wireless (Wi-Fi) is a convenient way for people to connect to a meetinghouse network and is often a practical way of providing Internet access to most parts of a building.

Good wireless coverage, however, does not replace the need for wired networking.

If additional wireless coverage is required and not already available, the Cisco 1041N or 702i wireless access point should be used.

The wireless coverage provided by a Cisco 800 series Meetinghouse Firewall and the 1041N or 702i wireless access point constitutes the standard for meetinghouse wireless. The SSID is LDSAccess. The passphrase is the same as the one created upon successful activation of an 800 series firewall. It may also be obtained by authorized individuals contacting the Global Service Center (GSC). This passphrase cannot currently be changed.

Wireless coverage from the 800 series firewalls and 1041N or 702i access points is often much better than that from typical consumer wireless devices. They are enterprise quality and centrally managed, and they automatically adjust their frequency based on their surroundings.

In the above Network Diagram the box between the network switch (3) and the wireless access point (WAP) (6) is a power injector. It adds electric power to the ethernet cable to power the WAP, which normally is not directly connected to an electric power source. This configuration is referred to as Power over Ethernet (PoE).

The C891F firewall has PoE built in to FE LAN ports 0 through 3. These ports are labeled "PoE". They can add electric power directly into the ethernet cable that connects the firewall to the WAP without requiring a separate power injector.

The C881 firewall has FE LAN ports 0 and 1 labeled "PoE". However, these ports are not activated for PoE, because a supplemental add-in card has not been installed. A WAP will need to have a power injector, as shown in the Network Diagram.

If more wireless access points are required, a 16-port network switch that has eight PoE ports can be ordered and installed. An ethernet cable can be run directly from a PoE port on the network switch to the WAP. If more PoE ports are not needed, a non-PoE network switch can be installed, as explained in the article Network Switch.

If other wireless access points are already set up in meetinghouses and working well, they may continue to be used at the discretion of the stake or district president and the facilities management group. Additional requirements are given in the article Commodity Wireless Access Points.  Full documentation on these devices needs to be readily available.