Note: These instructions assume that the user has a Mackie 402VLZ4 or similar mixer and an LDS/MECP wiring kit, both of which are available through Poll Sound. The total cost of these two items is typically just under $200 USD. Poll Sound serves the United States and Canada. It is located at 4026 South Main, Salt Lake City, UT 84107. The phone number is 1-801-261-2500. Outside of the United States and Canada, contact the area office for assistance in ordering similar meetinghouse webcast products and components.

A stake center satellite system usually includes equipment to create a TV feed from the chapel and send it to TV sets in other rooms, such as the Primary and Relief Society meeting rooms. These rooms can then be used for overflow seating, by parents with young children, or for the broadcasting of additional languages.

The following setup feeds the sound from the chapel sound system into a mixer. This enables the technology specialist to better control the audio levels input into the webcast encoding device. 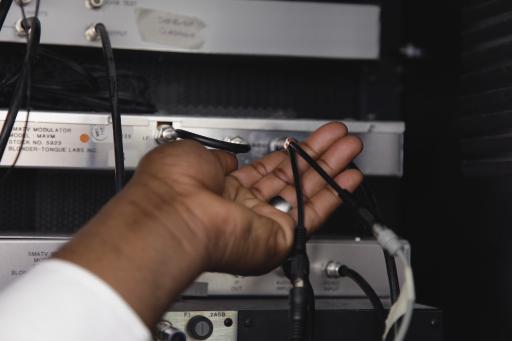 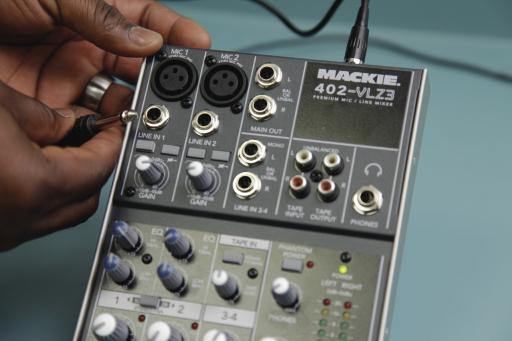 Note: With these connections made, the gain or volume on the mixer can be set up.

Note: Whenever this light is on, the sound is distorted. Generally, once the gain trim knob has been adjusted, it will never need to be adjusted again. However, if someone speaks with an exceptionally loud voice, the light may turn on. If this happens, turn the trim knob down a bit until the light goes off. After that individual has finished speaking, return the trim knob to its original setting.

Connections to the Webcast Encoding Device

The items from the cable kit that have not been used yet include:

Using the stake conference setup as an example, let’s assume that the left output from the mixer feeds into the webcast encoding device and the right output feeds into the telephone backup device. See more on Audio Backup

Note: The audio from the sound system is now connected to the webcast encoding device. The mixer is also connected so that the user can see the volume of the sound being transmitted and adjust it as needed.

For normal operations, adjust the volume knob for channel 1 on the mixer so that the LEDs on the VU meter come up to, but not above, zero. If they are above zero, the audio will be distorted at the receiving sites.

Note: Normal operations for an event require that the input knob be adjusted each time a new person starts speaking or when music is being presented. The input knob can rarely be left in the same position for an entire meeting.