Youth Curriculum’s Alignment with Come, Follow Me a “Small” but “Impactful” Change for Youth 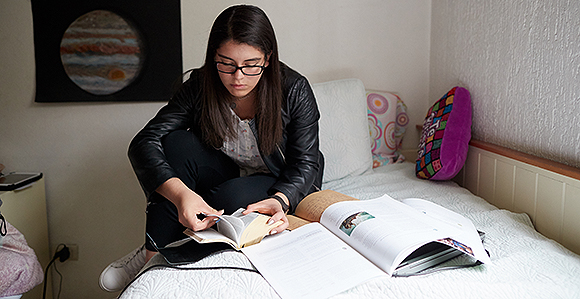 A young woman studies the scriptures while using the Come, Follow Me manual for individuals and families.

“This is a small change, but it can make a big impact on the spiritual nourishment of the youth.” —Brother Stephen W. Owen, Young Men General President

A slight adjustment to the Come, Follow Me curriculum for Aaronic Priesthood and Young Women meetings was announced by Brother Stephen W. Owen in the Saturday morning session of general conference.

Starting in January, the youth curriculum will still focus on gospel topics but will be aligned with Come, Follow Me—For Individuals and Families. This adjustment will further support home-centered gospel learning that has already been seen in Sunday School and Primary, said Brother Owen, Young Men General President.

“This is a small change, but it can make a big impact on the spiritual nourishment of the youth,” he said.

When Come, Follow Me for youth was launched in 2013, Elder Paul B. Pieper of the Seventy said: “This represents a marvelous opportunity for the youth. They will experience things they never felt before, and they will become different from the world.”

“We wanted to teach for conversion and not just for increasing knowledge,” Brother Osguthorpe said. “If we just increase knowledge, then that’s not enough. It’s harder for the youth to go out and live it unless they become converted to it.”

As Church leaders announced in a worldwide presentation on September 29 about the new Children and Youth program, Come, Follow Me will be an integral part of the gospel living component of the initiative.

Gospel study for 2020 will focus on teachings found in the The Book of Mormon: Another Testament of Jesus Christ. Digital copies of the manuals for individuals and families, Sunday School and Primary have already been released and can be found in the Gospel Library app and on ChurchofJesusChrist.org. The first few videos of the Book of Mormon series have also been released to coincide with the curriculum for 2020.

In March, the Church announced an alignment for seminary curriculum that began summer 2019. Youth are studying the New Testament for the remainder of the year and will shift to the Book of Mormon in January 2020.

“We think this is a tremendous development at this time when our young people need ever more strength,” said Elder Jeffrey R. Holland in a video about the seminary curriculum schedule. “We think is a wonderful alignment … with what the rest of the Church is doing. And we believe that it’s going to be wonderfully symbiotic with the … Church-supported—and now we add Seminary–supported—home-centered, gospel study.”

More information about the youth curriculum adjustment in 2020 will be forthcoming.