Jeremiah Shipley uploads pictures and faith-promoting military accounts of his grandfather to FamilySearch.

“After prayerful consideration, we approached the bishop youth committee with the idea of actually inviting the youth to bring their electronic devices with them to youth conference this year, something we'd never done before.” —Robbie Jackson of the American Fork 32nd Ward, American Fork Utah East Stake

How do ward and branch leaders work with youth concerning the use of digital devices at home and at church? That question was at the heart of a unique technology-focused youth conference held April 17 and 18 at Aspen Grove Family Camp near Provo, Utah, by the American Fork 32nd Ward, American Fork Utah East Stake.

Robbie and Gina Jackson, who planned the conference, asked Bishop David K. Hafen what his top concerns for the youth were. “I worry about the amount of time spent by many of our youth on electronic devices playing games, chatting and texting, and listening to music that distracts them from hearing the voice of the Spirit and remembering who they are,” said Bishop Hafen.

“After prayerful consideration, we approached the bishop youth committee with the idea of actually inviting the youth to bring their electronic devices with them to youth conference this year, something we’d never done before,” Brother Jackson told the Church News. “Our intent was to teach them, both by instruction and practice, when it’s appropriate to use these devices, when they should put them down, and where they should not take them.”

At the conference, the youth took part in 30-minute workshops taught by members of the stake. The workshops focused on positive use of digital devices including photography, music composition, video editing, coding, social media, writing, FamilySearch, and creating an “I’m a Mormon” profile.

Sister Jackson said, “We gave them suggestions for applying their creative talents to touch the lives of others in personal and meaningful ways by using their digital devices productively and not wasting their time.” Kade Wakefield, 13, said, “While creating my ‘I’m a Mormon’ profile, I read several others and was really inspired by their testimonies. I found out that it’s a great way that I can share my own testimony and actually be a missionary now.”

As an example of something the youth leaders used as a tool to instruct the youth was the “Five minutes to Serve” motto provided at vineyard.ChurchofJesusChrist.org. It was a simple and inspired focus for the conference. Nathan Rybin, 18, said, “I've learned that I have a responsibility to add beauty to this world and to help make it a better place.”

Ward member Randy Cox composed an original arrangement of the hymn “Have I Done Any Good?” specifically for the conference. Emma Rybin, 15, who served on the ward youth conference committee, wrote an original third verse to the song, capturing the theme and spirit of the conference:

The time is at hand to let our light shine,

The Spirit will be our guide.

Every moment we watch and are quick to observe,

No longer do we need to hide.

Consider the prayers you could answer now,

Just look up, there will be a way.

With our faith and His pow'r, the darkness we'll shield,

All 47 youth attending the conference participated in a choir, which included 14 soloists, two violinists, and one flutist. The 30 supporting vocalists learned the complex arrangement entirely at the conference in two 45-minute practice sessions, the same time they would have spent watching a movie.

“It was a dramatic and moving experience,” said Sister Jackson. “This special musical number became the heartbeat of the conference, and several of the youth could be found at the piano during break times practicing their parts, enjoying the catchy melody, and rehearsing the stirring words.”

As the conference drew to a close, leaders reminded the youth of the challenge extended to them to complete two different service projects during the two weeks that followed. On May 3, 2015, a youth-conducted devotional took place in which each youth shared service project experiences based on one of two scriptures from Matthew 5 and 6.

Megan Barlow, 15, said, “I’ve been praying lately to know how to help some friends who are struggling this year. Coming up here in these beautiful mountains and learning what we’ve learned has really helped me and given me answers to my prayers.”

The youth undertook a variety of service projects. One young man uploaded pictures and stories to FamilySearch of his grandfather who served in the U.S. military. Three young women took pictures of themselves at the temple and posted them to social media along with favorite scripture captions. Two brothers went together on a Sunday afternoon and sang to residents in a local nursing home. Several youth wrote poems and notes of appreciation and distributed them to friends.

The youth conference devotional concluded with the youth singing for their families and fellow ward members the song they learned at the conference. “Hearing them sing the words to that song after having just shared all that they had done was a touching and impactful experience,” said Brother Jackson.

“It was heartwarming,” said Sister Jackson, “to see the light in their eyes and feel the love in their hearts as they experienced the joy of using their talents to serve.” 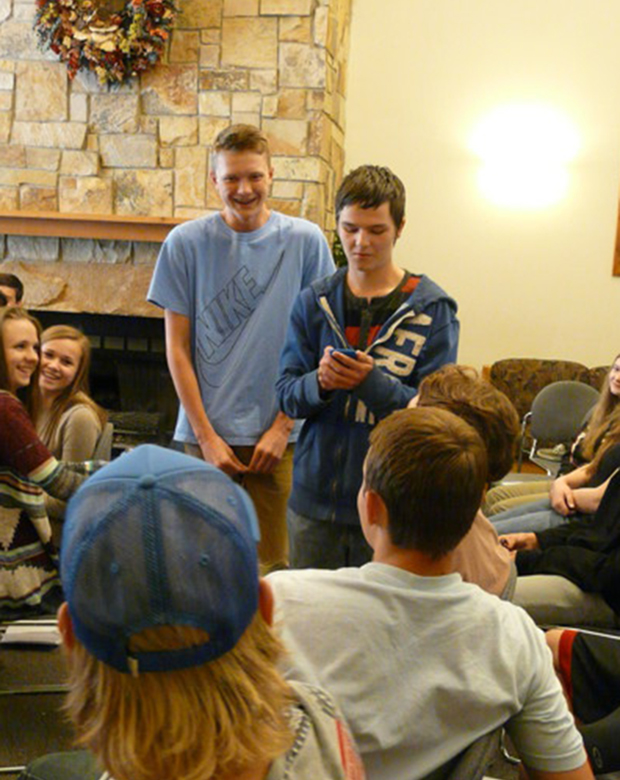 Christian Barlow and Steven Thorpe perform a magic trick as an analogy of distraction and deception. Photo by Janet Rybin. 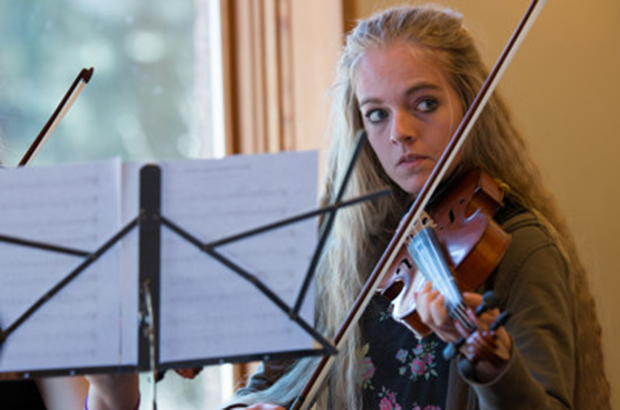 Nicole Nelson, one of two violinists, brings the beauty of strings to a musical number. Photo by Kent Kowallis. 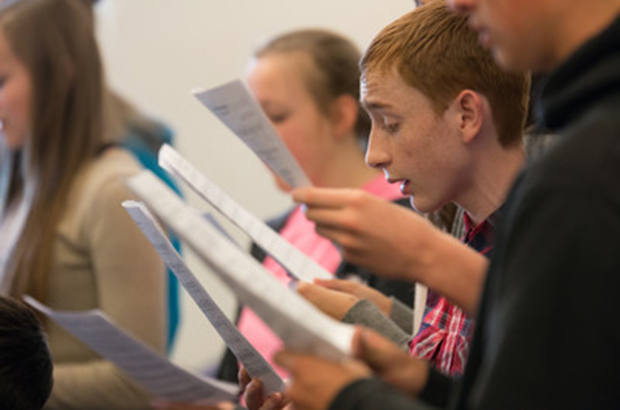