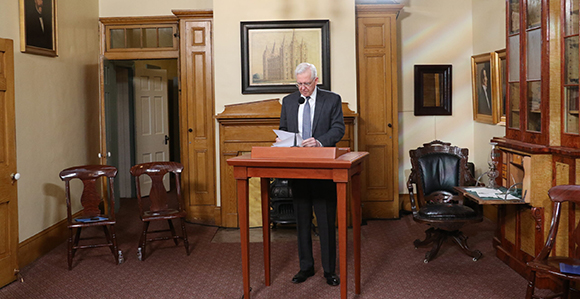 “Because of [the Lord’s] power, even our [small efforts] will be sufficient to accomplish His purposes in taking the restored gospel to all nations.” —Elder D. Todd Christofferson

The individual effort of every Latter-day Saint missionary makes a difference in the on-rolling of the Lord’s work in this last and great dispensation, said Elder D. Todd Christofferson in a missionary broadcast May 12.

“It has always been true, especially with missionaries, that the efforts of each individual matter,” said the member of the Quorum of the Twelve Apostles. “There are relatively few of us, and a very significant portion of the world has yet to hear the gospel of Jesus Christ. If even one of us gets weary in well-doing, it slows the work. And each one who is diligent affects the work in positive ways that even he or she may not realize or ever see.”

Speaking from an office occupied by Brigham Young in the late 1800s in downtown Salt Lake City, Elder Christofferson addressed missionaries in online MTC training on the topic “By Small and Simple Things.”

Due to the COVID-19 pandemic, missionaries are currently training via technology from home “missionary training centers.”

Subsequent Church Presidents John Taylor, Wilford Woodruff, Lorenzo Snow, and Joseph F. Smith also occupied the office that Brigham Young did. For more than 60 years, the office and another adjacent office were the administrative headquarters of the Church.

“As we mark the 200th anniversary of the First Vision and the beginning of the Restoration, you see that the restored Church has grown strong from very humble beginnings,” said Elder Christofferson. “Members of The Church of Jesus Christ of Latter-day Saints in earlier generations did all they could with small numbers and few resources to establish and extend the latter-day kingdom of God. Progress was slow, and persecution was at times intense, but they were diligent.

“They did their part in their day, as we hope to do our part in our day.”

By 1947, the 100th anniversary of the arrival of the pioneers in the Salt Lake Valley, membership had just reached 1 million. Of the almost 20 million people who have been baptized to date in this dispensation, about 85 percent are living today.

“Much has been achieved since the days that President Brigham Young presided over the Church from this small office, but much has yet to be accomplished before the Restoration is complete and all things are ready for the Lord’s return,” said Elder Christofferson.

“For one thing, ‘this Gospel of the Kingdom [must] be preached in all the world, for a witness unto all nations’ (Joseph Smith—Matthew 1:31) before the end comes. This will not be accomplished in one grand event but by the small and simple contributions we all make.” 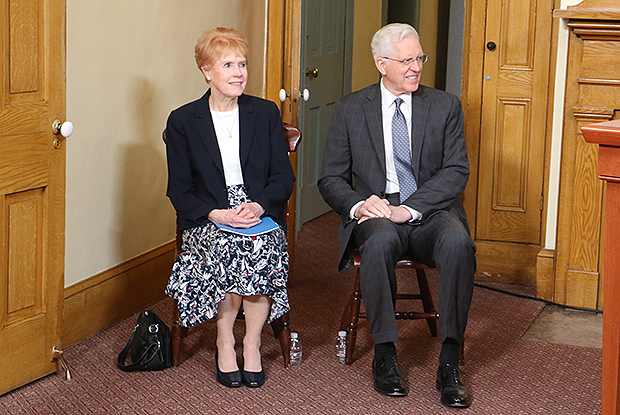 Elder D. Todd Christofferson and his wife, Sister Kathy Christofferson, prepare for a missionary broadcast from Brigham Young’s office in the Beehive House in Salt Lake City on May 12, 2020. Photo by Sarah Jane Weaver, Church News.

Quoting President M. Russell Ballard, Elder Christofferson spoke of the work accomplished by bees in a hive: in order to produce just one pound (0.45 kg) of honey, the average hive of 20,000 to 60,000 bees must collectively visit millions of flowers and travel the equivalent of two times around the world.

“You can readily see how this analogy applies to us,” said Elder Christofferson. “It is interesting that the size of a large hive is approximately 60,000 bees, which is almost as many full-time missionaries as are serving today.”

The product of our “missionary hive,” like honey, is sweet—sweet redemption and salvation.

“As you look at the world around you at this moment, however, you may wonder how you can make any real difference,” he said. “Governmental regulations to counter the COVID-19 pandemic restrict much of what we have traditionally done as missionaries. . . . But mission leaders and missionaries are finding new ways to ‘gather nectar and make honey,’ as it were.”

This is the Lord’s work, and He is doing it, he said. “Because of His power, even our [small efforts] will be sufficient to accomplish His purposes in taking the restored gospel to all nations.”

When Brigham Young used his office in downtown Salt Lake City, the Saints were struggling to survive and to establish the kingdom of God on earth in an isolated wilderness. Yet the Church was sending single men, married men, and some couples with children as missionaries to other parts of the United States, to the Pacific Islands, to Mexico and South America, and to parts of Europe.

“From that day to this, the small, cheerful efforts of millions of Church members, magnified by the Lord, have accomplished great things,” he said. “Brigham Young did his part, and so did thousands of other men and women in that day and since. The headquarters of the Church has expanded tremendously, but, more importantly, the work of gathering and preparing a covenant people has expanded exponentially.”

It was while the Prophet Joseph Smith and Oliver Cowdery were working in Pennsylvania on the translation of the Book of Mormon that John the Baptist came to restore the Aaronic Priesthood; later, the Apostles Peter, James, and John restored the Melchizedek Priesthood.

Last September, Elder Christofferson spent part of a day at the Church’s visitors’ center at the Priesthood Restoration Site in what used to be known as Harmony, Pennsylvania. It includes a re-creation (on its original foundation) of the small home of Joseph and Emma where the Prophet, assisted by Oliver Cowdery as scribe, translated over 70 percent of the Book of Mormon.

“As I stood in this room contemplating what had happened there, . . . I had a profound sense of the Lord doing His work by small and simple means, bringing to pass great things,” he said. “Out of this obscure undertaking has come the most powerful written witness of the Lord Jesus Christ in existence. The Book of Mormon is convincing support for the Holy Bible, and the instrument designed by God for the long-prophesied gathering of Israel in these latter days.” 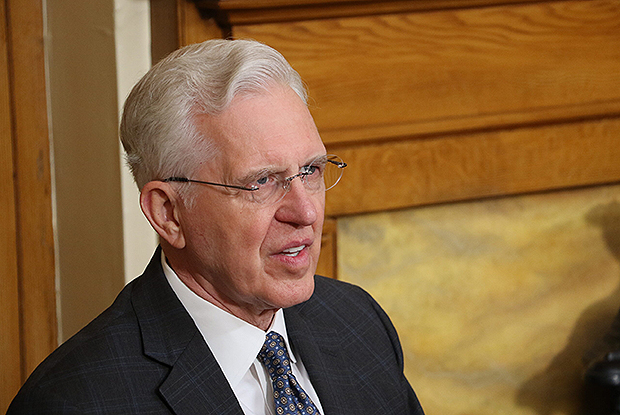 It is only with the Book of Mormon that missionaries will be able to take the gospel to all the nations of the earth.

“Since 1830 to the present, thousands upon thousands of missionaries, now including you, have joined the ranks of those who are called to serve.”

Elder Christofferson suggested several “small and simple things” that will lead to a great mission:

There will be other things that occur to you to focus on “that apply specifically to you and your mission,” he said. “The Lord will guide you. Just be intent on cheerfully doing what you can each day of your mission.”

It is true, he said, in and of themselves, people are weak. “We are nothing special, but Jesus Christ is,” he explained. “You carry His name. You are called by the authority of the holy apostleship. You are assigned to missions by His Apostles, and you are set apart by delegated apostolic authority. You bear the same testimony of Jesus Christ and His Atonement that the Apostles do. You are our companions in fulfilling the great commission to ‘teach all nations, baptizing them in the name of the Father, and of the Son, and of the Holy Ghost’ (Matthew 28:19).”