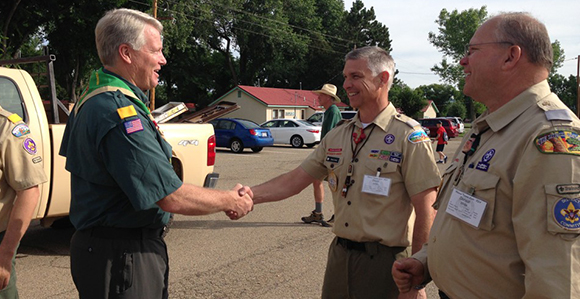 “A pattern we have here at Philmont is to share. We learn and share and study together and then we act. The act is going to happen after Philmont. Write in your journals, make a decision, make a plan of what you’ll do in changing things that can benefit others—even in your own family.” —Brother Stephen W. Owen, Young Men General President

“Silver on the sage, starlit skies above, aspen-covered hills, country that I love,” sing families in an outdoor amphitheater in northern New Mexico. Parents and children of all ages are snuggled together on benches under a dark, starry sky. The families are attending the opening program at Philmont Scout Ranch as part of the Priesthood Leadership Conference on Scouting.

The conference takes place each summer under the direction of the Young Men and Primary general presidencies, with assistance from the LDS-BSA Relationships Office. Two week-long courses are held, and stake leaders from across the United States and Canada, along with their families, are invited to come and learn about Scouting and the Aaronic Priesthood. This summer marks the 52nd year the Church has provided the training course at Philmont, and over 316 Church leaders (with their family members totaling more than 1,100 people) attended.

It was the first summer for newly called Young Men general president Brother Stephen W. Owen to preside at the conference.

“When I first arrived at Philmont I immediately felt years of foundational preparation for making this not only a learning experience for stake leaders, but a catalyst for revelation,” he commented. “Experiences at Philmont bless the priesthood leader and his whole family.” 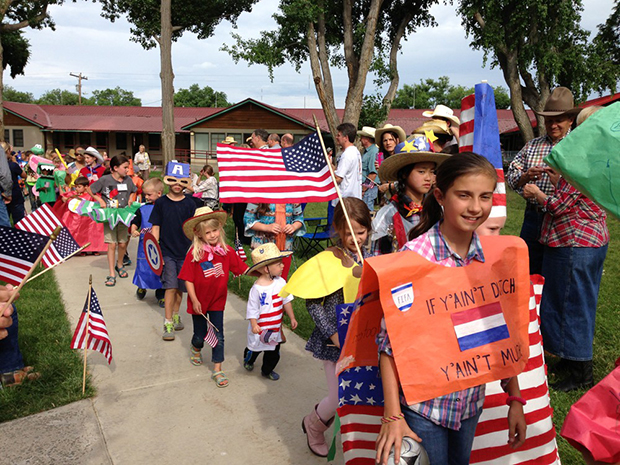 As families arrive, they are greeted by members of the Young Men and Primary general presidencies and soon make close friends from around the country. During the week they stay together in Tent City and eat their meals in the dining hall. Brethren attend classes during the day while spouses and children participate in a variety of age-group activities. Crafts, hiking, tours, archery, horseback riding, and even whitewater rafting are a few of the options. During free time, families play and lounge on the lush green lawn of the Villa Philmonte.

This beautiful summer home and surrounding 145,000 acres of Philmont Scout Ranch were a gift to the Boy Scouts of America from philanthropists Waite and Genevieve Phillips in 1941. The Phillips’s generosity carries a special spirit still felt by the hundreds of Scout leaders who attend training in the classroom facilities and the 22,000 Scouts who hike through the backcountry each year.

“I’m convinced that Philmont is a gathering place for some of the best people in the world,” said Mark Francis, LDS-BSA Relationships director. “When families come here they truly feel like they are in ‘God’s country,’ as the Philmont hymn suggests.”

As good families gather, miracles are bound to happen. Zoe Sheffield, 19, from Highland, Utah, arrived at Philmont with her family and prepared to leave on the youth backpacking trek. As she visited with another young woman in her crew—Amber Thornton, 19, from Raleigh, North Carolina—the girls discovered that they were both scheduled to report at the Peru MTC just days after their Philmont trek and were assigned to labor in the same mission in Arequipa, Peru.

“Having our daughters meet was a testimony to me that the Lord’s hand is in all things,” commented Amber’s mother, Angela Thornton. “What better way to get to know each other than to spend five days out in nature?”

Faculty members for the week included the Primary and Young Men general presidencies and their boards, the LDS-BSA Relationships director, and Church-service missionaries. Even though the conference is for priesthood brethren, there is ample family time.

“The priesthood leaders, the parents, and even the children enjoy the unity of being together,” commented Sister Cheryl Esplin, first counselor in the Primary general presidency.

Highlights of the week included Sunday Church meetings, family home evening, a Primary parade with homemade paper costumes, and closing testimony meetings. By the end of the week, priesthood brethren and families go home with new friends and a renewed desire to strengthen young men.

“The priesthood leaders, the stake presidents, the wives, the families all see the vision of what young men can become—righteous priesthood leaders,” commented Sister Mary Durham, second counselor in the Primary general presidency. “We integrate Scouting with the gospel and the spirit gets into their hearts.”

Oliver Lawal from the Cincinnati Ohio Stake was involved in Scouting as a non-LDS boy. However, after attending the conference as a counselor in his stake presidency, he now understands that “the priesthood magnifies Scouting.”

“The faces of several young men have come into my mind during this training,” shared Clyn Richards from the Boise Idaho North Stake. “These young men need their lives touched in a special way.”

Eagle Scout Mike Jaster, second counselor in the Bakersfield California East Stake presidency, commented, “I loved Scouting as a boy but didn’t know much about how it worked. This conference helped me understand how the pieces all fit together. The training was more than just Scouting. It was led by the Spirit and we all learned by the Spirit.”

His wife, Crystal Jaster, participated in a high COPE course with other sisters. “I was on top of the 24-foot confidence pole, and it gave me a glimpse of what young men might experience during a high-adventure activity,” she said. “I also gained an understanding of how Scouting can help our family as a whole develop spiritually.”

“Philmont is a setting where we can have a revelatory experience away from distraction,” explained Brother Owen. “All are edified by all. A pattern we have here at Philmont is to share. We learn and share and study together and then we act. The act is going to happen after Philmont. Write in your journals, make a decision, make a plan of what you’ll do in changing things that can benefit others—even in your own family.”