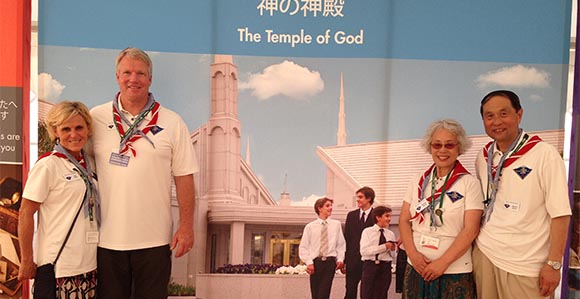 “This experience at the jamboree empowers you to be a servant of God. Serving God and your fellow citizens are understood parts of the Scout Oath. I believe this jamboree experience will help you to become great missionaries.” —Elder Koichi Aoyagi of the Seventy and Asia North Area Presidency

“You can walk into any building in the Church and you feel at home,” commented Brother Stephen W. Owen, Young Men general president, after his recent visit to Japan with his wife, Jane. “We found pockets of home,” he said.

During their five-day trip, Brother and Sister Owen didn’t just feel at home in Church buildings. They also felt at home in a tent at the World Scout Jamboree in Yamaguchi, Japan, where they made their first stop.

Over 35,000 Scouts from 150 countries attended the jamboree, held for 10 days in July and August of this year. The Church—along with 20 other religious denominations—was invited to host a booth in the jamboree’s Faith and Beliefs area. Brother and Sister Owen toured the Church booth along with Elder Koichi Aoyagi of the Seventy and Asia North Area Presidency and his wife, Sister Shiroko Aoyagi.

After placing pins on their home state of Utah on a large map, the Owens visited with Scouts and Church-service missionaries inside the tent. They also met informally with leaders of other religions who had tents nearby, including the Jewish, Islamic, Christian Orthodox, Buddhist, and Roman Catholic religions.

Commenting on the world jamboree, Brother Owen said, “It was impressive to observe Scouts from the whole world all together and see so many young boys with similar values involved in a common cause.”

The Owens and Aoyagis also attended an interdenominational service at the jamboree. Representatives from 12 religions presented short explanations of their beliefs. Scouts who were members of The Church of Jesus Christ of Latter-day Saints sang “I Am a Child of God,” and an LDS chaplain, David Buckner, offered a prayer.

Brother Owen, with Elder Aoyagi presiding, then conducted sacrament meeting on site for approximately 450 Church members and their guests, including youth and adult Scout leaders. While a cool ocean breeze blew underneath the pavilion, the sacrament was blessed and passed by young international Scouts.

Scouts from four different nations—including Nigeria, Burma, Japan, and the United States—shared their testimonies. Charles, a young Scout from Nigeria, talked about how his experiences in Scouting had introduced him to the gospel.

Brother Owen then addressed the congregation. He said, “We can truly feel grateful for settings like this, where during our Scouting experiences we can come together, partake of the sacrament, and honor the Sabbath day.”

He shared how he had been a high school student in 1975, when the Tokyo Japan Temple was announced. Then, in the five years it took to complete the temple, Brother Owen recalled the life-changing events he had personally experienced, including graduating from high school, serving a mission, and getting married. His first child was born two weeks after the Tokyo Temple was dedicated. He admonished the young Scouts to “do everything you can to have the Holy Ghost in your life.”

“The conditions of this jamboree environment—attending sacrament meeting while sitting on concrete, camping with limited facilities, interacting with youth of other faiths, fulfilling leadership responsibilities, following a schedule, dealing with extreme heat and humidity, walking everywhere—these experiences help young men do hard things and prepare them for their missions,” Brother Owen said. “I am also impressed with the wonderful shepherds and advisers who create these experiences for growth in the young men. Scout leaders—Melchizedek Priesthood leaders—strengthen boys in the preparatory priesthood to receive more.”

Elder Aoyagi then spoke and said, “This experience at the jamboree empowers you to be a servant of God. Serving God and your fellow citizens are understood parts of the Scout Oath. I believe this jamboree experience will help you to become great missionaries.”

Many Scouts and leaders in attendance were not members of the Church. Bryan Willets, LDS chaplain, shared, “One young Japanese Scout I spoke with afterwards told me what a good feeling he had during the service.” And Joseph Prouser, a Jewish rabbi, commented that he makes it a point to “always attend the LDS Church services at national and international jamborees.”

Later that afternoon the Owens and Aoyagis both spoke at a devotional for the Yamaguchi District at the local Ube chapel. Those attending included members from the Ube Branch as well as three outlying branches in Hofu, Shimonoseki, and Yamaguchi.

“We’ve never been to Japan before,” said Brother Owen. “But please know how comfortable we are with you.” Speaking specifically to the young men in attendance at the devotional he said, “The Lord has a great mission in life for you. I pray you’ll feel His love and partake of all the blessings He has in store for you.”

The Owens also made a visit to the Hofu Branch meetinghouse and met with members there for lunch.

“There wasn’t a language barrier because the Spirit was strong, and we all felt it,” Brother Owen said.

The Owens and Aoyagis also participated in a family home evening with Scouts from around the world.

Their travels included an August 4 trip to Hiroshima to tour the Hiroshima Peace Memorial Park and to speak at a devotional in the Hiroshima Japan Stake on August 9 before returning home to the United States the following day.

“I am impressed by the humility and love and kindness of these wonderful people and their desire to serve one another,” Brother Owen recalled. “You can feel it in their commitment and conversion to the gospel. The Church tent at the jamboree, the small chapel in Hofu, Japan—these were pockets of home. I hope everyone in the Church can feel that.”